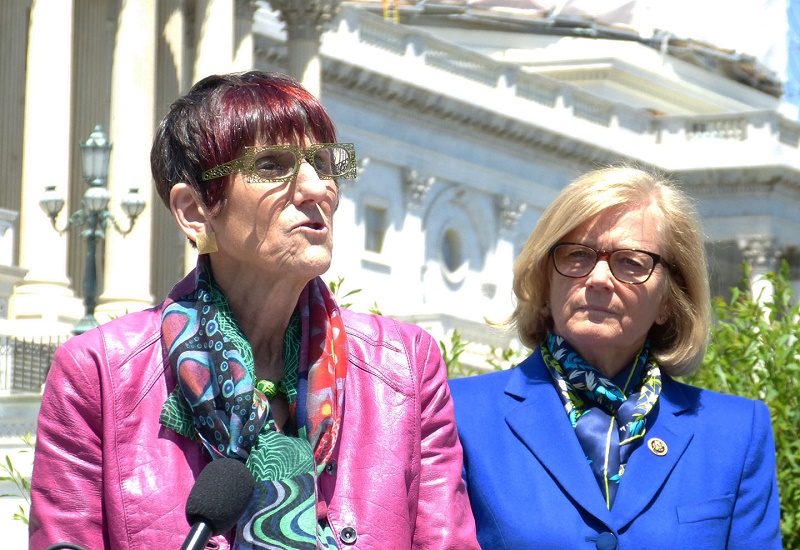 Washington, D.C. -- Congresswoman Rosa DeLauro, Chellie Pingree and Louise Slaughter (out of frame) hold a press conference expressing their opposition to TPA/TPP and its effects on food safety in the U.S. (Photo Credit: Anthony Rivera)

The Senate has moved forward with Trade Promotion Authority, or TPA this week, bringing it one step closer to becoming law. Also known as “fast track” authority, the legislation sets up a framework for the president to sign trade deals with other countries that only requires an up-or-down vote from Congress. But hurdles remain as advocates and opponents alike are beginning to shift their focus to the House of Representatives. Critics of TPA point to the recent ruling by the World Trade Organization against the U.S. food labeling program as an example of how the lack of input on these trade deals affects consumers and citizens. But some members of Congress say the food labeling program has little to do with food safety and even less to do with TPA. Anthony J. Rivera has the story from Washington, D.C.

For people like Connecticut Congresswoman Rosa DeLauro, the recent arbitration decision on meat labeling by the World Trade Organization, or WTO, is a canary in a coal mine. Along with Congresswoman Chellie Pingree and Louise Slaughter, she says the country of origin food labeling program is just one example of weakened consumer safety standards in the name of trade. The program known as COOL requires imported beef, pork and chicken to be marked with a specific label. But the WTO ruled against the program on the grounds that it diminished the value of other trade-partners’ products.

“We need to get this right,” DeLauro told reporters at a press conference outside the House of Representatives, saying these labels inform and protect consumers. “The health of our families is on the line right now. There are too many unanswered questions and too many corners around the TPP which can lead to problems for public health.”

TPA and the secretive Trans-Pacific Partnership, or TPP have been very contentious issues on Capitol Hill during the past few weeks. Many Republicans have sided with President Obama while many Democrats have opposed the sweeping trade authority. Senate progressives like Elizabeth Warren, Bernie Sanders and Sherrod Brown led the charge against the trade deal but their hand weakened in the days leading up to the cloture vote.

But a few Republicans have also been hesitant to support TPA and TPP. Some see it as handing more power to the president.

As time ran out before the Memorial Day recess, Senate Majority Leader Mitch McConnell attempted to weaken the opposition’s argument. This week he held a press conference touting what he said would be the benefits of the trade deal for small businesses. McConnell also points out that the authority would be available to the next president too. And that president, he says, could be a Republican.

Texas Congressman Michael Conaway is the chairman of the House Agricultural Committee and says COOL is not only ineffective but it’s also redundant and wasteful. He dismisses DeLauro’s argument and her insistence that food safety will be affected by the trade promotion authority.

“Those are false, you know, red herrings that folks who’re against trade, against TPA and against TPP or whatever, they’re going to use no matter what,” Conway says. “Her issue is safety, food safety. I got it. But she is gratuitously using this issue to try to support her argument on safety and it has nothing whatsoever to do with safety.”

Still, congressional supporters of the trade deal may be acting on blind faith. TPP negotiations are occurring behind closed doors and official copies have not been made available to Congress. Most of what is known about the specifics of the agreement come from draft copies of chapters of the trade deal leaked to the whistleblower website Wikileaks.

Patrick Woodall, a research director at Food and Water Watch, an advocacy group seeking greater protection for consumers, warns there’s more to worry about with TPA and TPP than lack of clarity in labeling. He details a litany of issues, such as antibiotics, in the WTO’s sanitary and phytosanitary measures, or SPS measures.

“But here’s the real problem is that we know that the TPP is going to increase the imports,” warns Woodall. “Even if it did nothing else, even if there was no SPS language in the TPP, our border inspectors would face a larger number of imports with the same capacity which means we would inspect less.”

With fast track authority progressing, a number of House members are paying close attention to the legislation’s movement through the upper chamber. Interest groups are likely to adjust their strategies ahead of their last chance to stop it.