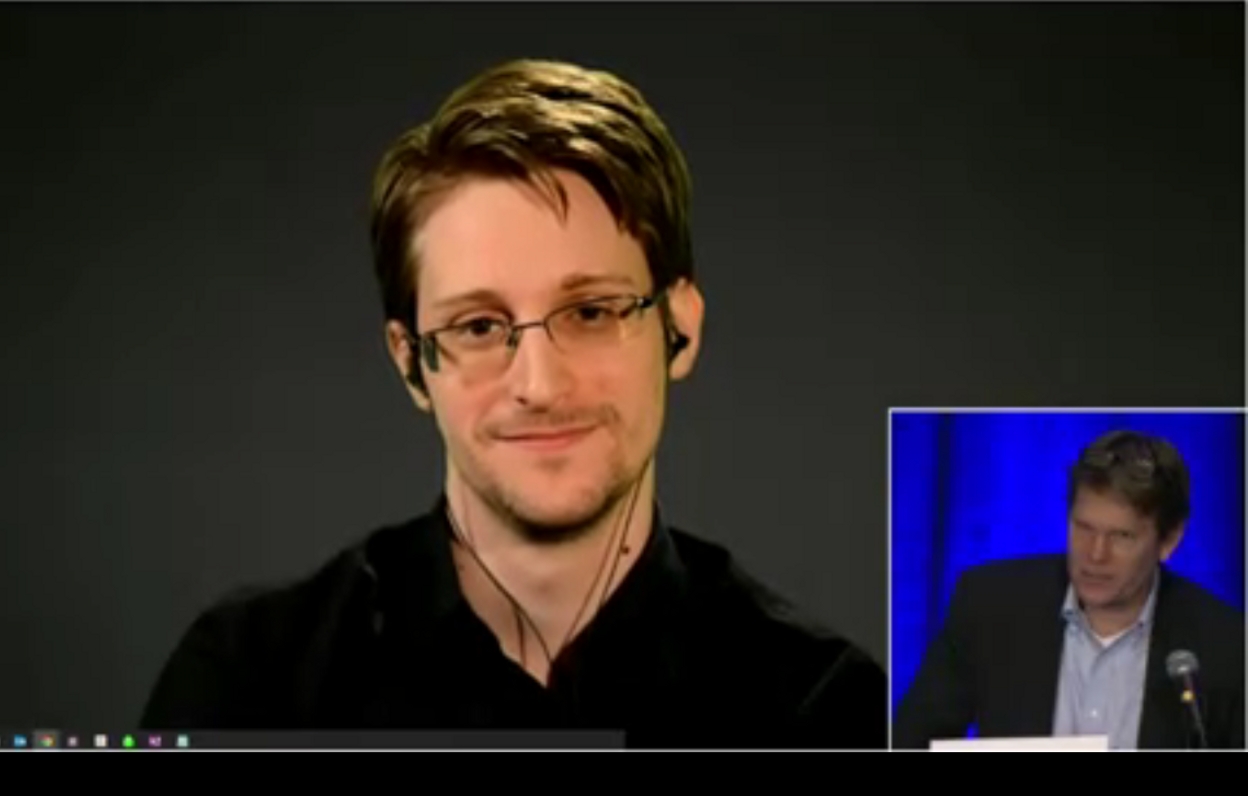 During the coming weeks, FSRN will feature a series of reports on the intersections of technology policy, digital privacy, press freedom and democracy. As a preview, we’re publishing the entirety of a extended Q&A session between two whistleblowers – former NSA contractor Edward Snowden and ex-FBI agent Mike German.

Hillary Clinton recently criticized Snowden’s whistleblowing, saying that he should have come forward with his concerns through internal procedures. In his time at the FBI, Mike German did just that and shared his experiences and reflections in this 60 minute interview with Snowden.

The conversation, held live at the opening session of the 25th annual Computers, Freedom and Privacy conference, ranges from how 9/11 created a generation gap at the country’s intelligence agencies, how internal programs at this agency suppress dissent within the ranks, and why an adversarial press is crucial to a healthy democracy.

Mike German: It’s interesting that there’s so much similarity in our backgrounds. We both come from a military family, both spent a lot of time in the DC area growing up, both went into federal service. As that’s what you do, right? You go into the government and go to work. And really I think the big distinction is that you came into the intelligence community, into the military, after 9/11. Where I came in in 1988 when the lessons from the previous intelligence scandals – and particularly the framework for the reforms – was very present in everyone’s mind. And what I saw was a big transition after 9/11 that – well, I’ll let you explain whether that was actually something that was in the front of people’s minds when you started at these agencies.

Edward Snowden: I definitely think so. I mean, when I first entered into government service, I was enlisting for the Army in 2004 when everyone else was protesting against it because when you grow up in the shadow of government, you don’t really doubt it. Like you said, it’s what you do; you grow up, you work for the government and eventually retire.

But in 2005, I started working for the CIA as a contractor. And that was quite unusual because, although I had a significant amount of technical skill, I didn’t have a lot in terms of paper credentials. I had some industry certifications and things like that, but the Bush administration had really gone on a hiring tear for all of the intelligence community, but specifically for the CIA, the NSA, groups like that. And so when I joined, there was this incredible bifurcation in the workforce where you had sort of a group of old-timers who grew up going through training learning Morse code and how to solder, you know, radios together. They didn’t think that when something breaks you just threw it away and got another one like you do today. They basically had to field service everything.

And then you had this new generation where everything was digitized, everything was computerized. What made us valuable was the fact that we had mastered a new sort of era of technology. But what we all lacked was the institutional history of why the reforms happened and why they were so necessary. We still knew about them in sort of a generalized academic sense because every year in government you’ve got these sort of annual training requirements where you’ve got to tick the box saying you watched the flash presentation or read the fifteen-page whatever. And we got those, but it wasn’t really something from our generation, it was considered solved problems, secret history. And rather than, bearing in mind that power and reach and extension by government can be dangerous, not just to our adversaries but also inside, to our own civil society.

We were in this new moment, where anything could be justified. I mean, whether it was torture or mass surveillance, targeted killings, and so on and so forth. The motto the I learned, almost the first day when I came in, and this was as a contractor before I was even sworn in officially as a CIA officer, was “mission first.” Mission first. That’s really all that mattered. Not when do we go home, not what you do, but the mission. The mission was all that matters. And I think that did have a lasting impact on not just this new wave, but it gave an organization a chance to change its character and its culture radically, and I think that’s happened because the majority of those holdovers have since retired.

(This is only a partial transcript of the 60 minute audio)

FSRN’s Shannon Young recorded the Q&A session as it happened and was able to attend the CFP conference thanks in part to a grant from the Media Democracy Fund via the Media Consortium’s Media Policy Project.