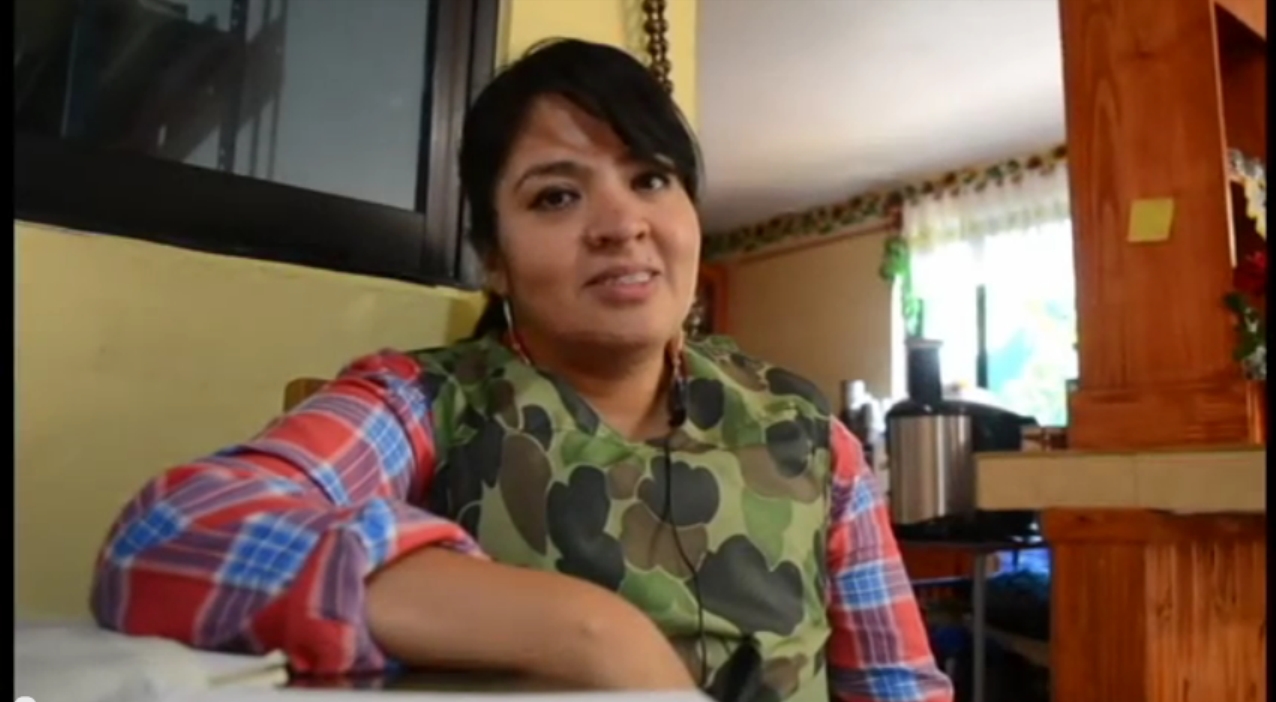 Screenshot of an interview with Nestora Salgado in 2013. (Screenshot via YouTube)

A naturalized U.S. citizen held in a maximum security prison in Mexico has escalated her weeks-long hunger strike by announcing she will no longer drink liquids. Political prisoners in Mexico are often placed in harsh, maximum security prisons in what some say is an attempt to break them. Nestora Salgado is demanding her freedom, her supporters want nothing less than her transfer to a lower security jail in Mexico City where she can have better access medical care and legal counsel. Many people regard Salgado’s case as emblematic of how state mechanisms are used against those who organize to defend their communities from organized crime. Shannon Young has the details.

In a public audio message sent after she began her hunger strike in the maximum security prison in Tepic, Mexico Nestora Salgado said she never imagined she’d find herself in her current situation.

“I’ve raised my voice before to defend our rights, to defend the rights of those of us who have been trampled on the most,” Salgado said during a recorded telephone call from prison. “I’m now raising my voice again in a hunger strike because I’m asking for my freedom, I’m asking that they recognize Nestora as a community policewoman and that they are violating my rights. I don’t think you all will take this as an act of cowardice. To the contrary, I’m speaking out and need to do so because the government knows I’m innocent but yet continues to hold me captive, imprisoned.”

In response to a wave of organized crime in her hometown of Olinala, Guerrero, Nestora Salgado helped to form and then lead a community police force. Under Section 701 of Guerrero’s state constitution, indigenous communities have the right to form their own law enforcement and justice mechanisms under the traditional governance system. In early 2013, Salgado was elected leader of the area’s legally-recognized community police force – a rarity for a woman in law enforcement, even more so in rural Mexico.

But in August of that year, she crossed an influential local official when she arrested him on allegations of covering up a double murder. Soon after, Salgado herself was arrested and sent more than 660 miles away to the federal maximum security prison in Tepic. Federal authorities charged her with kidnapping and organized crime – charges a federal judge threw out in March 2014, ruling that Salgado was acting within her community police authority when she arrested – not kidnapped – the local official. But instead of closing the case, Guerrero authorities filed the same charges against her at the state level.

“The due process situation has been absolutely atrocious,” says Thomas Antkowiak, Director of the International Human Rights Clinic at Seattle University’s School of Law. Antkowiak has been heading up international litigation efforts on Salgado’s behalf.

“One thing to keep in mind is that Nestora Salgado has not been convicted of any crime,” her lawyer says. “Since August of 2013, she’s been held in pre-trial detention. And as a matter of fact, federal courts have dismissed charges against her and so all that’s left are these state charges. And the state courts refuse to respond to our petitions, to our motions. Everything is absolutely just completely stuck.”

Trying to get her case moving again, Salgado began a hunger strike on May 5th. Two and a half weeks later, Salgado told her eldest daughter she would start to refuse liquids as part of her hunger strike. Since then, her relatives say they have received no information about Salgado’s health, despite written requests to prison officials.

Nestora Salgado’s name, and those of two other imprisoned community police leaders from Guerrero, were part of chants at a march in Mexico City Tuesday to mark yet another month since the disappearance of 43 Ayotzinapa teachers’ college students in Iguala, Guerrero. The case of the missing students – last seen in police custody – made longstanding allegations about so-called narcopolitics in Guerrero part of the national discourse.

Salgado’s husband, Jose Luis Avila, says political and criminal power-brokers in Guerrero and many parts of Mexico see community police as a threat to their interests: “There are local and state governments that work hand in hand with organized crime. And the community police very much affect those interests. In the town of Olinalá, once the community police force started working, high-impact crimes like kidnappings, murders, armed robberies and extortions ended. And if you add it all up, we’re talking about a huge sum of money that they were losing due to the simple fact that a bunch of Indians got together and formed a community police force.”

Just last week, Avila received a painful personal reminder of the reach of organized crime in Mexico and the impunity with which they operate. As Salgado’s prison hunger strike began to draw more attention, Avila’s father was murdered by unidentified gunmen in the state of Jalisco.

“I’ve already lost my father and to lose my wife as well would be something very difficult,” Avila said by phone from his home in Renton, Washington. “Unfortunately, one has to speak out because many people have already been lost in this violence in Mexico.”

Meanwhile, the security situation in Guerrero continues to disintegrate. Earlier this month, masked and armed men abducted at least 14 people – and possibly as many as 30 – from the town of Chilapa, not far from the small city where the 43 Ayotzinapa students went missing.