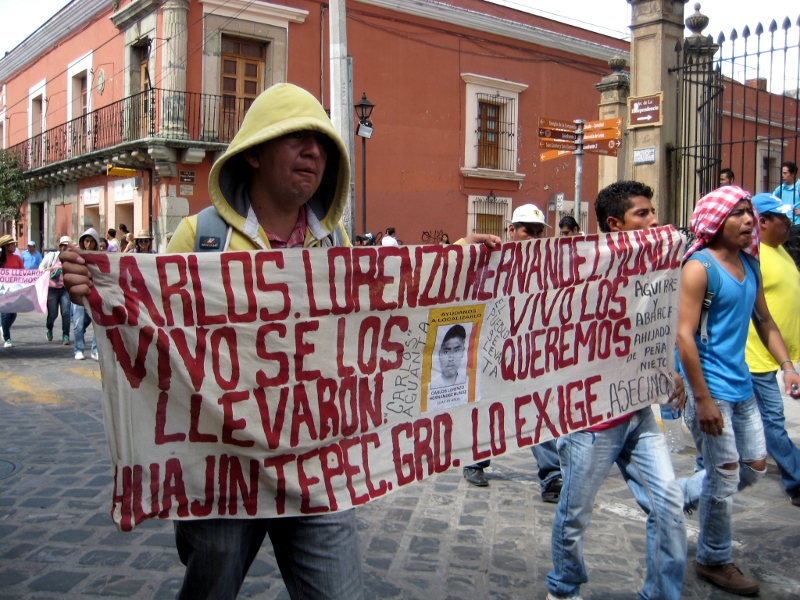 People across Mexico are marking the anniversary of the start of the 1910 revolution by demonstrating in solidarity with the parents of 43 missing students from the Ayotzinapa teachers college. The parents have spent much of the week traveling around the country to shore up public support for their demand that the state find and return their abducted sons.

The federal government’s investigation seems to rest on a theory based on detainee statements that all of the students were killed by members of a drug gang shortly after police from the city of Iguala took them into custody. The parents continue to hold out hope their sons are alive and refuse to accept any theory without physical evidence to back it up.

The three groups of parents who split up to canvass the country will converge in Mexico City this evening to lead what are expected to be the largest protests yet calling for justice in the case. Shannon Young reports.

The journey by parents and classmates of the missing students brought out supporters in each city and town they stopped in along the way. One caravan went north, another south, and a third traveled around Guerrero, the state in which the Ayotzinapa teachers’ college is located and the epicenter of ongoing protests. The three groups converged in Mexico City on Thursday, November 20th, the 104th anniversary of the start of the Mexican Revolution.

Carmelita Mendoza, mother of Jorge Cruz Mendoza, explained that the parents embarked on the nationwide caravans to rally support and pressure the government to find and return their sons.

The families hold the state accountable for their sons’ fate because the students vanished after they were taken into custody by uniformed police in the city of Iguala the night of September 26th. The local mayor allegedly ordered their disappearance.

Mexico’s attorney general announced earlier this month that three detainees gave statements indicating that all 43 students were handed over to criminals and killed the same night they disappeared. According to the official line, those who carried out the murders also incinerated the remains.

Without physical evidence, the parents don’t accept the story and demand the search remain active.

“They want to take the case in another direction and end this struggle,” says Valentin Cornelio, one of the parents. “But for us, this struggle is just getting started. If our boys don’t turn up, we’re not going to go away. They took them away alive and therefore are responsible for 43 lives.”

The case of the missing students has resonated in a country where tens of thousands of people have gone missing in the last seven years. Authorities have long blamed organized crime for the large-scale abductions, yet relatives who carry out their own investigations say they encounter little support from government institutions when it comes to searching for their loved ones.

During the caravan’s stop in Oaxaca, Elizabeth, an accounting student who gave only her first name, stood with her young daughter on the sidelines of a large march, holding a home-made sign.

“If we don’t fight today, we’ll be under the government’s yoke tomorrow,” Elizabeth said. “The authorities don’t want to accept that it was the state who disappeared the students and that’s who has to return them. And this isn’t just about the mayor. This involves all three levels of government. News of this situation was known. Why didn’t they take immediate action? Why did they wait so long to react and uncover what all was happening? Now they’re looking for them dead: in graves, in garbage dumps. They’re telling us that they were incinerated whereas in social media it’s being said that it rained so hard that night, a fire like that would’ve been impossible.”

The situation has become a political crisis for President Enrique Peña Nieto. Federal officials have tried to deflect criticism about their foot-dragging, saying the crime occurred within the jurisdictional boundaries of the state of Guerrero.

Peña Nieto took nine days to even address the disappearances, and left the country for a week just after Mexico’s Attorney General announced the students were likely massacred soon after their abduction by police.

On Tuesday, in his first public appearance since returning from economic and trade summits abroad, Peña Nieto lashed out at those who use violence to destabilize Mexico, but he wasn’t referring to organized crime or corrupt politicians and police, but rather to protesters.

“It seems as if they’re acting on behalf of interests to destabilize or create social unrest and – most of all – target the national agenda we’ve been promoting,” Peña Nieto said. “The federal government stand firm and is determined to continue working towards a national agenda to bring well-being to more Mexicans and to accelerate the rate of economic development and growth which we want for all Mexicans. We will not stop.”

Demonstrations in solidarity with the Ayotzinapa teachers college have brought tens of thousands of people into the streets, especially in Mexico City. Some protesters have started fires and broken windows in government building and offices of political parties.

Omar Garcia, an Ayotzinapa student and survivor of the September 26th police attack, says there’s a clear bias when it comes to the official discourse and definition of violence.

“When they call us – and those who accompany us – violent, they start to take sides,” said Garcia. “Because they condemn us, but not these who have taken thousands off to mass graves. They say we’re violent when we’re blocking a road, but they don’t say anything about roadblocks manned by hired killers. They stay real quiet about that. Let’s leave these contradictions by the wayside and take a stand once and for all because this country has to change. And if it doesn’t change then it should at least be clear that those of us from Ayotzinapa, as students and parents, are doing everything possible to shake up this country’s establishment.”

The movement around the case of the missing students is rapidly becoming the most organized and cohesive challenge to President Peña Nieto’s administration. The question on the minds of many Mexicans now is whether the ruling party will respond with the authoritarian tactics of its not-so-distant past.