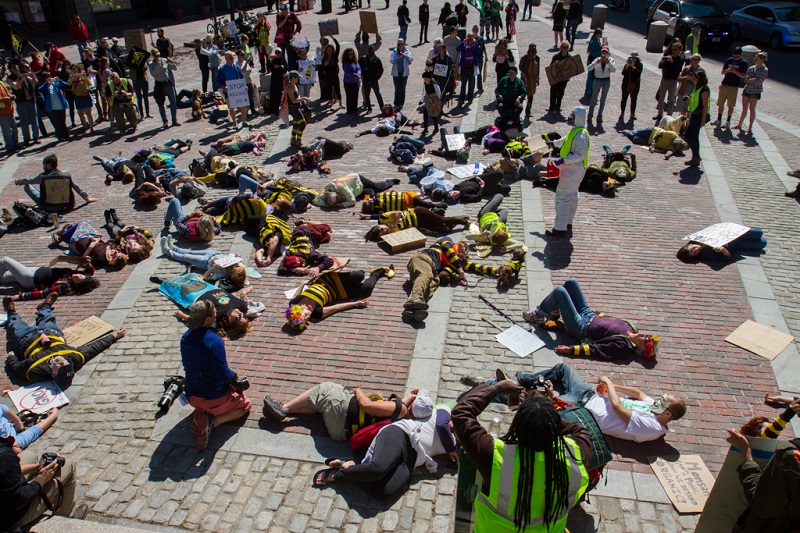 The participants of the rally made a performance on the main town square symbolizing bees killed by chemicals. (Photo Credit: Ekaterina Danilova, May 23, 2015)

Genetically modified organisms are the focus of a bill currently being debated in the Maine legislature, which would put the state’s existing law mandating labeling of foods containing GMOs into effect sooner. Another bill would help extend greater support to building an alternative to the current food system that has GMOs at its center. Supporters rallied at the weekend to register support for the bills and to oppose the use of GMOs in American agriculture as bad for human health and the environment. Jenny Johnson reports.

Maine is a leader in supporting small organic farms and maintaining access to fresh, local foods, according to many involved in food policy.

“When we succeed in shortening the food chain because of a four times increase in farmer’s markets and a rapid growth of the community supported agriculture movement, food hubs and wonderful distributors like Crown of Maine Organics, we are winning,” says Betsy Garrold from Food for Maine’s Future.

Supporters of local food systems are continuing to push for greater political support. One example is a bill currently before the state legislature that would put the right to food into the state constitution, which supporters say would benefit local food systems. Another bill seeks to enact Maine’s GMO labeling law now, without waiting for surrounding states to also pass such requirements.

At a march on Saturday, May 23rd support for the bills was mixed with criticism of the American biotech seed and agrochemical producer Monsanto. Around 200 people gathered in downtown Portland, Maine, for the “March Against Monsanto.”

The march was part of a worldwide action in around 40 countries calling for labeling foods containing genetically modified organisms and opposing the widespread use of pesticides and patented seeds. This year’s international action against Monsanto came on the heels of a World Health Organization warning that glyphosate, a top-selling chemical produced by the company, probably causes cancer. Glyphosate is the active ingredient in the weed killer known as Round-up.

Many of the Maine protesters were wary of genetically modified organisms in staple food crops like corn and soy. Other protesters said government regulators have not adequately tested the effects of GMOs on human health and the environment before declaring them safe. Others at least want GMOs to be labeled so that consumers can decide for themselves.

Protesters wore yellow and black striped costumes to the march, and at one point, fell to the ground and feigned death as an actor in a fumigator suit sprayed them. Populations of pollinators like bees and butterflies have declined rapidly in recent years and many blame the widespread use of agrochemicals and genetically modified crops for the insect deaths.

They are hoping Maine can continue to lead in pushing for a more sustainable food system but also watching efforts on Capitol Hill that would limit states’ ability to label foods containing GMOs.