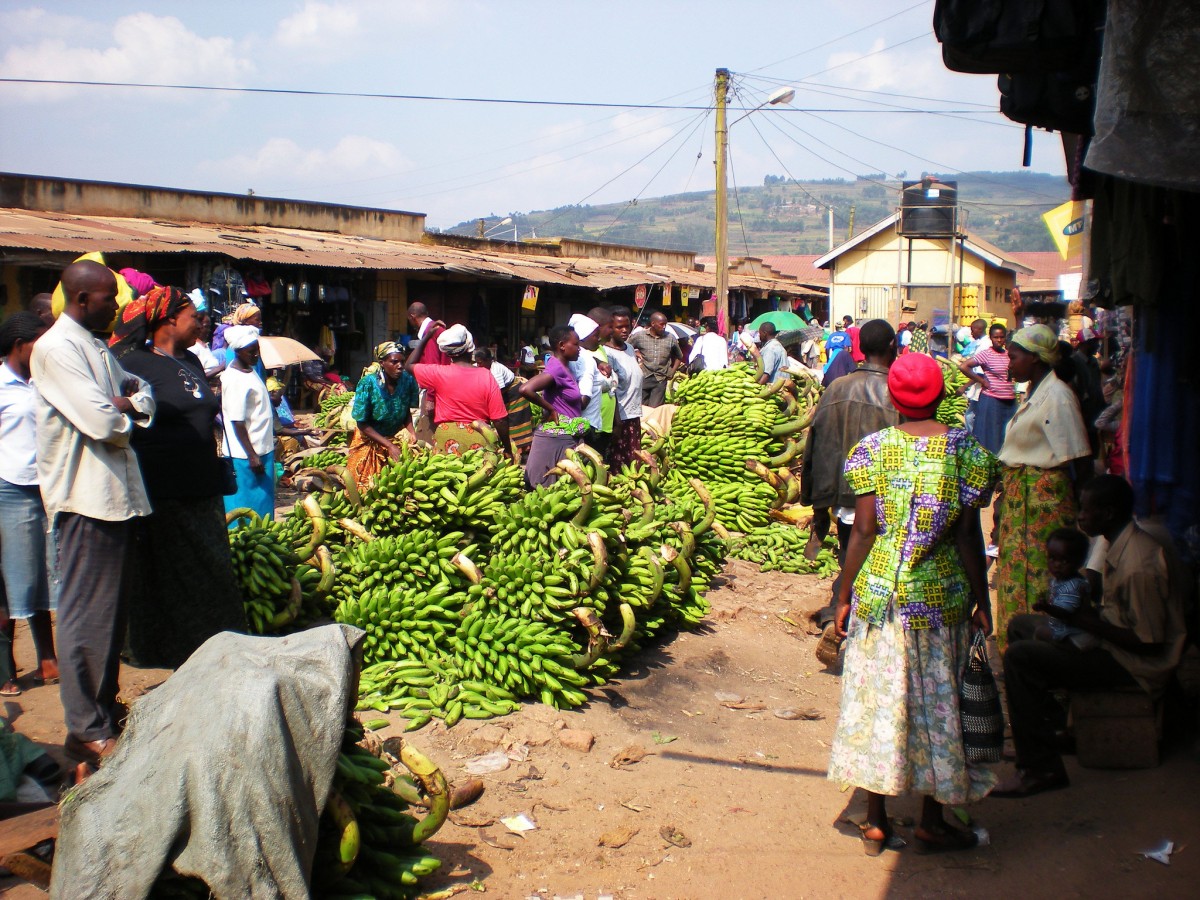 Bananas are a part of Uganda's social and cultural fabric and supply an estimated 30 percent of daily calories. (Photo credit: Sunisa Kanchanasuwan via Flickr / Creative Commons)

You may wonder what protesters clad in banana costumes have to do with the Bill and Melinda Gates Foundation. But then you may not be up on a multi-continental GMO banana experiment funded by the foundation whose stated goal is to reduce Vitamin A deficiency in Uganda. The FDA doesn’t require clinical trials for genetically modified food stuffs, but scientists developing the GM banana want to see just how effectively the human body can derive the vitamin from their banana.

The human feeding trials are slated to begin at Iowa State University sometime this year. The issue is stirring controversy, because there’s been no animal testing done before beginning the human feeding protocol. Last week, 57,000 petition signatures were delivered to the Gates Foundation in simultaneous demonstrations in Seattle and Ames, Iowa. Martha Baskin has our story.

In the pouring Seattle rain, Heather’s Day’s banana costume is both a statement and rain coat. She and others gathered in front of the Gates Foundation to protest the GMO banana study, whose targeted population is women and children in Uganda, and to deliver a petition bearing tens of thousands of signatures gathered by Iowa State graduate students and AGRA Watch. The latter is a watch-dog group for the Alliance for a Green Revolution in Africa funded by the Gates and Rockefeller Foundations.

Bananas are a part of Uganda’s social and cultural fabric and supply an estimated 30 percent of daily calories. Protesters accuse the foundation of supporting a corporate bio-tech model of agriculture that is undermining small farmers, food security and cultural sovereignty. Heather Day of AGRA Watch says human feeding trials add another dimension to the issue.

“It’s one of the first-ever human trials of a genetically modified crop. What do we learn that’s useful from U.S. women testing this product that’s supposedly intended for children in Uganda?” Day asks.  Iowa State University received $600,000 from the Gates Foundation to test the GMO bananas and invited women aged 18 to 40 to participate in return for a $900 stipend.

Neither Iowa State officials or the study’s lead researcher, Wendy White, would agree to an on-record interview, but staff for White said that while “the protocol for the study hasn’t been registered with clinicaltrails.gov,” it would happen this year.

A molecular biologist with the Salk Institute in La Jolla, California, Dr. David Schubert, who added his name to the petition protesting the feeding trials, has concerns about the study’s safety. The FDA does not require the same level of safety testing of genetically modified food as it does for food additives and dyes because the technology is categorized as “Generally Recognized As Safe.”

“The fact that you can put basically anything into these plants and then get it through the FDA with no testing is ludicrous,” Schubert says.

Schubert says beta-carotene, the organic compound that’s been lab engineered into the GM banana, poses a particular problem because it’s both synthesized and broken down into a much smaller molecule called retinoic acid, required for development of the nervous system.

“It works in incredibly small amounts and in higher amounts, or any modification of this molecule, it causes birth defects,” says Schubert.

The team that developed the Gates Foundation-funded GM banana doesn’t seem to share such worries. Project leader Dr. James Dale of the Centre for Tropical Crops and Biocommodities at Australia’s Queensland University says the amounts are relatively small compared to other beta-carotene rich foods, such as sweet potatoes and carrots.

The GM banana combines the genes of an East African cooking banana with a variety native to Papua New Guinea and Micronesia that produces beta-carotene naturally. Dale says he favored genetic engineering over the more traditional method of crossbreeding in order to achieve a banana with the precise combination of desired traits.

He adds that the pending Iowa State University human feeding trials are about determining how much beta-carotene is converted by the human liver into Vitamin A.

“And that’s a very important number to get, because then we know how much we need to have in our bananas,” Dale says. “That’s what this trial is about. How efficiently do humans convert alpha beta-carotene into Vitamin A from a cooked banana source?”

Back in rainy Seattle, banana costumed protesters, and non, walk to the doors of the Gates Foundation which are regularly patrolled by security guards. Today, unlike other protests they say, something different happens. The guards step aside and Gates staff come out of the building.

“We have petitions,” says Phil Bereano, one of the protesters with AGRA Watch, as he shares a few words with Gabriella Stern, the foundation’s Director of Media and External Relations: “Fifty-seven thousand people concerned about the support of the GMO banana project that you guys are behind.”

“Thank you, I hope you stay warm,” one of the protesters says back. And with that the protesters walk back into the rain and Gates staff to their offices.

It’s unclear if the two sides will find agreement on whether genetically modified bananas are the answer for Vitamin A deficiency or if instead they’ll have an adverse affect on Ugandan small farmers, food security and food sovereignty.

Another unknown is if the banana engineered specifically for its market and population will convince Ugandan regulators to loosen its current restrictions on the commercial-scale production of genetically modified crops.