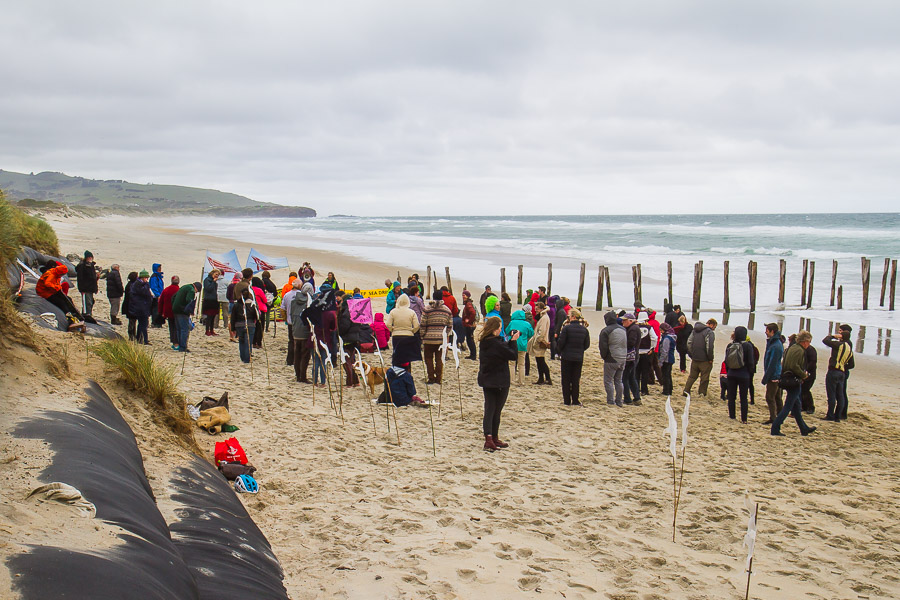 Gathering at St. Clair beach to join the nation-wide day of action to protest against the inaction of the government about climate change, in Dunedin on December 7th, 2014. / Robin Dianoux

The local government of Dunedin, a mid-sized New Zealand city, voted to divest from fossil fuels this week. The council’s $82.5 million fund currently holds about $1.5 million in fossil fuel shares after dumping about $500,000 more earlier this year because “outlook for those shares is not as good as it could be.” Carla Green reports.

Almost a year ago, international headlines hailed Dunedin as the first New Zealand city to divest from fossil fuels. Now, that title will finally be deserved – almost.

Back in May of 2014, the Dunedin City Council – or the DCC – voted to draft a “socially responsible investment policy.”  The proposed policy would bar council fund investment in a number of industries, including pornography, tobacco, and fossil fuels.

Just under a year later, the DCC voted to approve that policy.

“Well it’s been a long time coming,” said Rosemary Penwarden, a spokesperson for Oil Free Otago, an activist group that has been campaigning for council divestment for over a year. While the Council has up to two years to implement the new policy, Penwarden sees its approval as a positive step. “It’s a very strong message that the council is quite aware of what is known as the carbon bubble. And what’s soon to be stranded assets. If we’re to keep the world below the two-degree level of warming that was agreed to by world governments in Copenhagen in 2009, we just cannot burn most of what these industries already had on their books.”

In the year that has elapsed since the initial vote last May, Dunedin has missed the metaphorical boat to be New Zealand’s first city to divest – Christchurch beat them to it.

Last year, Christchurch City Holding Limited, the company that holds the city’s investments, passed a policy not to invest in a number of industries like tobacco and “companies whose primary focus is the extraction and production of fossil fuels.”

Unlike Dunedin, though, the decision was not a public one voted on by councilors, so it mostly passed under the radar – and out of the public eye.

In any case, Dunedin Mayor Dave Cull said being the first wasn’t the point. “The ambition wasn’t to lead the way, the ambition was A, to do what we thought was the best thing, the right thing, and B, it was prompted by our community,” Cull told FSRN. “We went out for consultation, asked them about socially responsible investing. We had already an informal policy excluding tobacco and armaments, and the community came back overwhelmingly and said ‘we want you to exclude fossil fuel extraction as well.’ So we listened to that.”

The vote was close – seven councilors and the mayor for, seven councilors against – and the council’s decision isn’t without its critics. “I feel it is hypocritical when we rely so heavily – all of us – doesn’t matter what side of the argument you’re on, all of us, to get by, by using fossil fuels, by burning fossil fuels,” remarked City councilor Andrew Noone, one of the seven who voted against adopting the policy.

Plus, he said, divestment from the fossil fuel industry might discourage oil and gas companies from setting up in Dunedin. Several companies are currently prospecting for fossil fuels in offshore New Zealand waters around the country, including areas off the coast of Dunedin.

But Mayor Cull says that divestment won’t discourage oil and gas companies from coming to Dunedin, and that it shouldn’t.  “There are people who believe that the issue of divestment from fossil fuel extraction and the issue of Dunedin possibly being a support base for the oil and gas exploration off our coast are linked. I personally think that’s a lot of rubbish.”

The city council isn’t the only Dunedin institution to mull divestment. The University of Otago – one of the most well-known universities in New Zealand – is based in Dunedin. Its board said last month that, after receiving a letter from several high-level academics at the university, it too, was considering divestment.

The university noted that less than 1% of the fund is currently invested in the fossil fuel industry, but with a $169.1 million fund less than 1% could be over $1 million.

“The university divestment was really initiated by staff, who have got together and asked them to consider divesting,” says Penwarden of Oil Free Otago. “I don’t know where it is at now, but the students have come on board, so there’s a lot of encouragement, and a lot of support. We’re really encouraged by the support from students and from the staff about this.”

If the university does divest, it won’t be the first in New Zealand to do so – Victoria University in Wellington has already beat them to it.