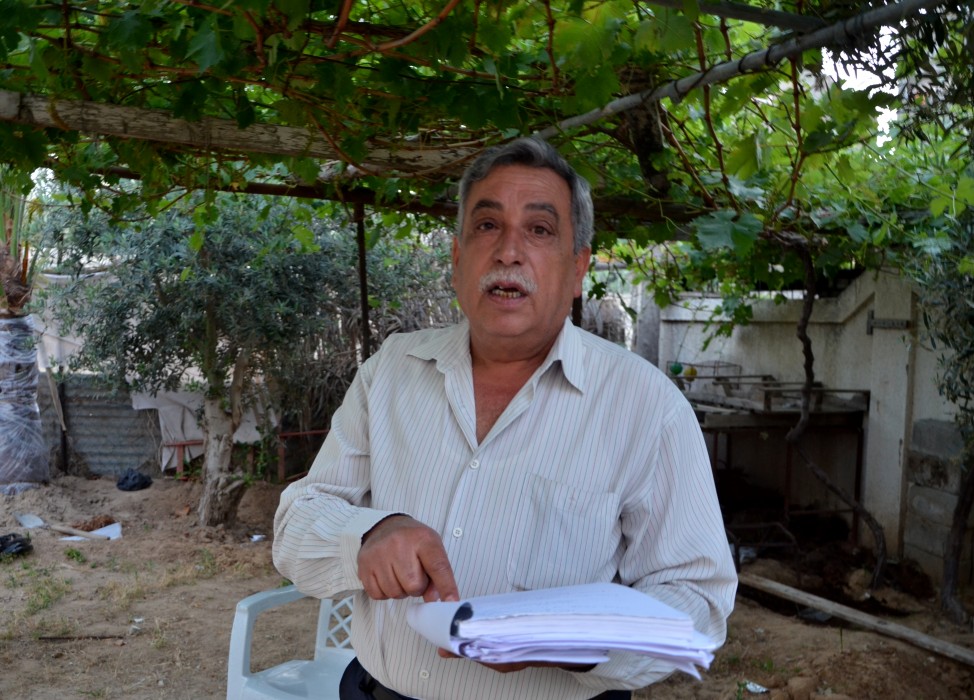 Fifty-eight-year-old Ghazi Misleh points to a map on a wall of his home in the Maghazi refugee camp in the central Gaza Strip. He explains the map shows farm lands in Batani Alsharqi, the village his parents were forced to flee in May of 1948.

Batani Alsharqi is only 30 miles away, but Misleh has never been there and neither have most the living descendants of its displaced inhabitants. Once depopulated, paramilitaries destroyed all of the village’s structures except for a police station built by British mandate authorities in 1940.

Misleh has been relentlessly collecting stories about Batani Alsharqi for the last two years and has compiled the research into a 200-page book, titled I Am from There and I Have Memories.

“In the book, I highlighted the history of the village, from its origin, through the first quarter of the 19th century, the 1948 Nakba, up to the present time,” he told FSRN. “My tools for the study included historical resources and research, interviews with villagers who lived there prior to 1948, as well as some related documents that I collected from the villagers themselves.”

At the time of the Nakba, the village had approximately 750 residents and was about 1,500 square-acres in size. Misleh’s grandfather owned about 50 acres of farmland. Many in the village cultivated citrus trees.

The book includes this first-hand account of the displacement given by Mossalam Younis Mossallam, an elder Misleh interviewed last year.

“We loaded our luggage onto a camel and fled until we reached the eastern limits of Maghazi,” Mossallam recounts. “We stayed in a tent, but we were hit by live ammunition. At that time, my sister A’esha was shot and wounded, so we fled to the sea in western Maghazi and when the Maghazi refugee camp was established, we were able to return to Maghazi itself.”

Misleh hopes to publish and distribute 1000 copies of his book with financial support from a cousin who works in the United Arab Emirates. The book includes maps and images of people and places of Batani Alsharqi. The process of compiling the research was a labor of love for a village he has never been able to visit.

According to Khaled Safi, professor of modern Arab history at Gaza’s Alaqsa University, Misleh’s effort – though valuable – lacks formal academic research methodology. Safi says almost 100 books documenting the Nakba have come out over the decades, but they haven’t been enough.

“We need a collective national effort that keeps record of the Nakbah history, in a time of constant attempts by Israel to obliterate the Palestinian identity and memory,” remarked Safi. “And I believe that such a collective work is not less significant than any other forms of the Palestinian struggle, including armed and political ones.”

The Palestinian Central Bureau of Statistics suggests that as of late 2014 the Palestinian refugee population stood at five and a half million. Most live scattered among 58 refugee camps in Jordan, Syria, Lebanon and the occupied Palestinian territories. Eight of those camps are in the Gaza Strip.

Many refugees from specific areas of historical Palestine have tried to remain together. That is the case with those displaced from Batani Alharqui. Misleh estimates the descendants of Batani Alharqi number around 11 thousand and that most live in the Maghazi refugee camp in a neighborhood named after the village.