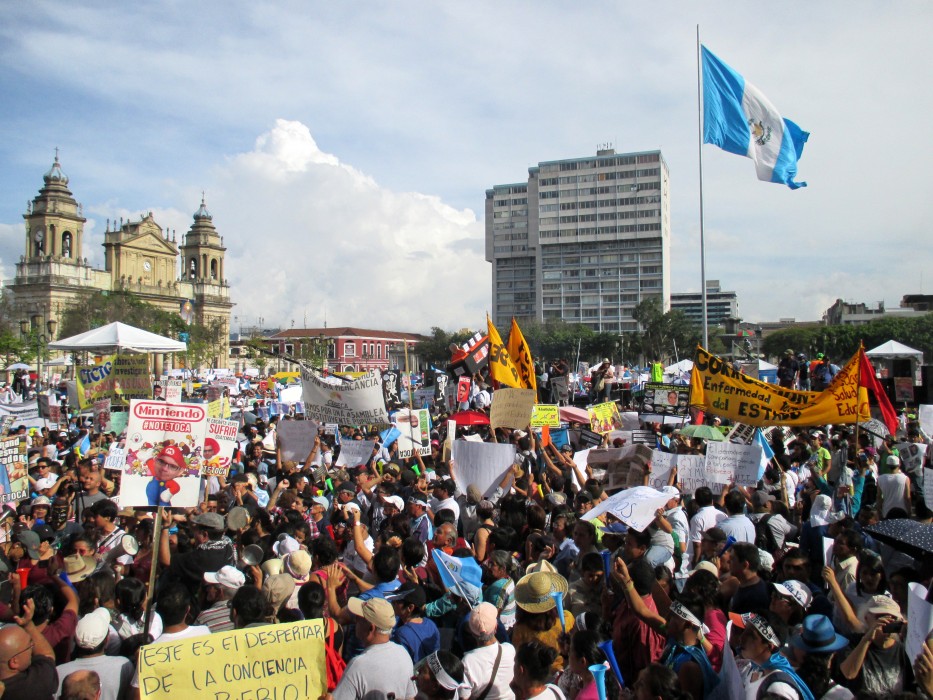 A "Renuncia Ya" rally in Guatemala City, May 30, 2015. Photo by Sandra Cuffe, used with permission.

Corruption scandals in Guatemala are fueling ongoing public protests across the country. Dozens of officials have been arrested and a slew of high-ranking politicians, including the country’s vice-president, have resigned in recent weeks.  Many power brokers within Guatemala’s government – including President Otto Molina – built their careers in the military special forces during the country’s 36-year-long civil war. Now, the wave of scandals has sparked a popular movement with people in the streets calling for everything from the president’s resignation to deep systemic change. For more on the situation, FSRN’s Shannon Young spoke with Central America-based independent journalist, Sandra Cuffe.

FSRN: This movement that’s been gaining momentum in Guatemala, often referred to as “Renuncia Ya” or “resign already.” How did it start?

Sandra Cuffe: One April 16th, the UN International Commission Against Impunity in Guatemala, along with national prosecutors, cracked down on the first of two criminal networks within government agencies. So on April 16th  they cracked down on a network within the national tax office. The current and former heads of the national tax office were arrested. There were actually over 20 arrests. And so when revelations of what had been going on went public and people found out that they had been siphoning up to $120 million in customs revenue, there was a massive outpouring of public indignation and outrage and that’s what sparked the first protests.

And then, in mid to late May, there was another massive bust – this time within the Guatemalan Social Security Institute – which implicated the entire board of directors, which included the president of the Central Bank. So, really high profile government officials have been arrested and so it’s these multimillion-dollar corruptions scandals that have come to light that have provoked – or at least sparked – the beginnings of this movement.

FSRN: And the Secretary of Energy and Mining has also been implicated?

SC: Yeah, he was not implicated in either of these two big corruption scandals where there’s been these massive arrests. But for years there have been allegations, and even investigations, into several other Cabinet members within the current administration. So when these two major corruption scandals came to light, that sort of breathed life back into these other investigations that were going on.

And so, the allegations that have been floating around against the Ministry of Energy and Mines are mostly related to government contracts. So he’s actually being under investigation by the National Controllers office. He’s accused of having overpriced contracts and having violated the regulations for public bidding for public contracts.

And of course a lot of mining and energy projects in the country have sparked, you know, massive community resistance.  In some cases, even states of siege declared by the government, massive militarization, people have been killed, people have been arrested.  So it sort of opens up a whole other line of questions, you know, if there were certain contracts that had been targeted for investigation, it raises the questions, “Well what about all these other mining licenses and hydro-electric dam licenses and high voltage transmission licenses?”

FSRN: Many in the marches filling the plazas are calling for the resignation of the president. Does that seem like a possibility at this point?

SC: The president has stated repeatedly that he is not going to step down, there’s actually general elections scheduled for this year at the beginning of September in Guatemala. So, Pérez Molina’s term will end in January of next year. And the resignation of the Vice President on May 8th was seen by a lot of analysts as an attempt to calm down the movement that’s been going on, which of course continued.  And then the next wave of Cabinet Ministers and other officials resigning on May 21st was also seen as, sort of a scramble for him to hold on power. So it’s unclear whether he’ll resign, as things are right now he probably won’t but who knows what will happen over the next few months.

FSRN: Beyond the figures of those currently in power, the Renuncia Ya movement has been calling for systemic change. What are some of the changes that many are rallying behind?

SC: So one of the things is that, aside from targeting the President specifically as an individual, people are also targeting the leading presidential candidate, who’s from the opposition LIDER party which has the held the majority of seats in Congress. So the message there is, “this isn’t an alternative either.” So that’s one part of it, is looking at-beyond the individual of the President, looking at all the political parties and how governance has been working in the country. But then much beyond that, a lot of different sectors have been demanding much deeper demands. The nationalization of energy has come up, a halt to all mining projects in the country, some indigenous and campesino organizations have been pushing for a popular constitutional assembly to basically rewrite the constitution and transform the country that way.

So there’s a whole range of demands and so there isn’t one set of demands because you actually have-even parts of the business community have been on-board with some of the resignations and then at the more grassroots level, people have reacted to that saying, “you’re part of the problem,” and who exactly-what companies were involved in the customs revenue scandal hasn’t been made public yet. So really it’s a huge rainbow of demands, going everything from only the resignation to this massive grassroots transformation of the country.

Sandra Cuffe is a freelance journalist based in Central America. She joined us from Antigua, Guatemala.