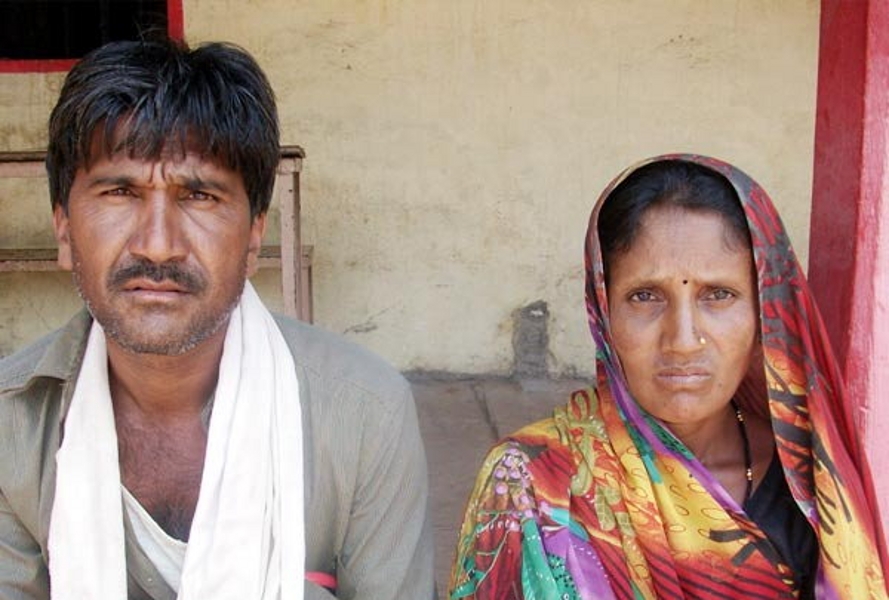 Lal Singh and Mani Bai sold two sons into indentured servitude to try to pay off some of their debt. (Photo credit: Shuriah Niazi)

Crushing personal debt is forcing many Indian farmers to take extreme measures. Thousands have committed suicide to try to save their family farms, as personal debt in India does not pass from one generation to the next. Others have taken to contracting their children out as indentured servants. Shuriah Niazi reports from the Indian state of Madhya Pradesh.

Lal Singh is one of many farmers reeling from crop loss in the state of Madhya Pradesh. Unseasonal rains and hailstorms not only destroyed his crops, but pushed him into debt.

When a shepherd from the state of Rajasthan came offering advance payment on a one-year work contract, Singh said it seemed like the only way to start to pay back moneylenders. Two of his sons, 12-year-old Sumit and his 11-year-old brother Amit, left with the shepherd who paid Singh the equivalent of $555 for both.

“It was wrong, but we had to do it just to stay alive,” the children’s mother, Mani Bai,  says of the  heart breaking decision.  “Otherwise, we would have been forced to commit suicide like so many other farmers. With no money and no means of sustenance, we were desperate.”

As indentured servants, the children endured cruel treatment and had to work long, hard hours. They managed to escape one day in April.

In their attempt to return home, the two boys came into contact with Childline, a non-governmental organization which took care of them before handing them over to their parents.

“Their job was to look after and graze the sheep and other animals,” explains Vishnu Jaiswal, executive director of Childline. “They were engaged in some other menial jobs and were often beaten over trivial issues. They were not given even two square meals a day. As things became intolerable they took courage and fled. We have also found injury marks on their hands.”

Childline does not have statistics on the number of children in indentured servitude, but believes there could be many other cases of child traffickers approaching desperate farmers in debt.

The case of the two boys is the subject of an ongoing investigation.

Rajnish Shrivastava is the administrative head of the Harda district, where the boys first contacted authorities after their escape.

“We are not taking such cases lightly. We are trying to find under what circumstances the parents sold their kids. We fear there could be more children in other shepherd camps,” says Shrivastava. “We can’t allow the kids to be abused and trafficked in this way. We’ll continue investigations till all the children are rescued.”

Lal Singh saw selling his sons into indentured servitude as an alternative to committing suicide, but that hasn’t been the case for dozens of other farmers in the state. Around 46 farmers committed suicide or died due to debt-related stress in Madhya Pradesh alone between February and June 2015 following successive crop failures. The situation is equally grim in other states like Maharashtra, Rajasthan, Uttar Pradesh, Haryana and Punjab.

The governments of all affected states have announced relief packages for the affected farmers. But the pace of payouts is slow while interest on personal debt continues to accumulate.