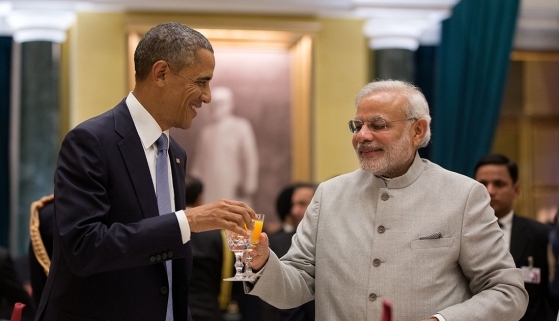 President Barack Obama wrapped up a three-day visit to India today. Nuclear power and economic cooperation topped the agenda. While some view the visit as a promising sign of progress in bilateral relations, others say US trade interests stand to gain the most. FSRN’s Jasvinder Sehgal reports.

The bilateral nuclear deal dominated the domestic coverage of the U.S. president’s visit to India this week.

In exchange, India has altered certain aspects of its liability law regarding industrial accidents. The government led by Prime Minister Narendra Modi agreed to let nuclear firms set up a compensation fund led by insurance companies.

Critics of the deal warn that compromising the law – which took effect after the Bhopal gas leak disaster – could leave victims of a nuclear accident unprotected.

“We achieved a breakthrough understanding on two issues that were holding up our ability to advance our civil nuclear cooperation, and we’re committed to moving towards full implementation,” said President Barack Obama in his farewell speech Tuesday evening. “And this is an important step that shows how we can work together to elevate our relationship.”

India is home to the world’s fastest-growing population, thereby making it a strategic market for U.S. trade.

Indian Prime Minister Narendra Modi said the relationship between the United States and India “stands at a new level.” He stated that the two executives have “decided to give this critical partnership a new thrust and sustained attention. For this, we have agreed that India and the United States must have regular summits at greater frequency. And, we will also establish hotlines between myself, Barack and our National Security Advisors.”

Fullbright fellow and social science professor Ramesh Arora says the two countries appear to be strengthening ties on multiple levels and that “America was genuinely thinking in terms of making India a friendly partner in terms of progress on human, political, social, economic, social, cultural, technological, in all spheres.”

In recent years, India has become one of the largest purchasers of U.S.-manufactured arms and military equipment.

While the nuclear deal has been portrayed as purely civilian and an aspect of a larger clean energy deal, some critics point out that India is not a party to the international Non-Proliferation Treaty.

Activist Varinder Kaur also noticed something missing from the annual Republic Day celebrations: “When I saw the Republic Day parade, at which President Obama was the guest of honor, I was surprised to see that for the first time in 16 years the delivery system of our nuclear weapons program was not on display.”

President Obama cut his Indian visit short in order to travel to Saudi Arabia to pay respects after the death of King Abdullah.

Trade between the U.S. and India has increased significantly in recent years and is on track to reach an estimated $100 billion in 2015.

Editor’s note: The audio and transcript was updated Jan. 30th to correct a mistake in a voiceover clip.