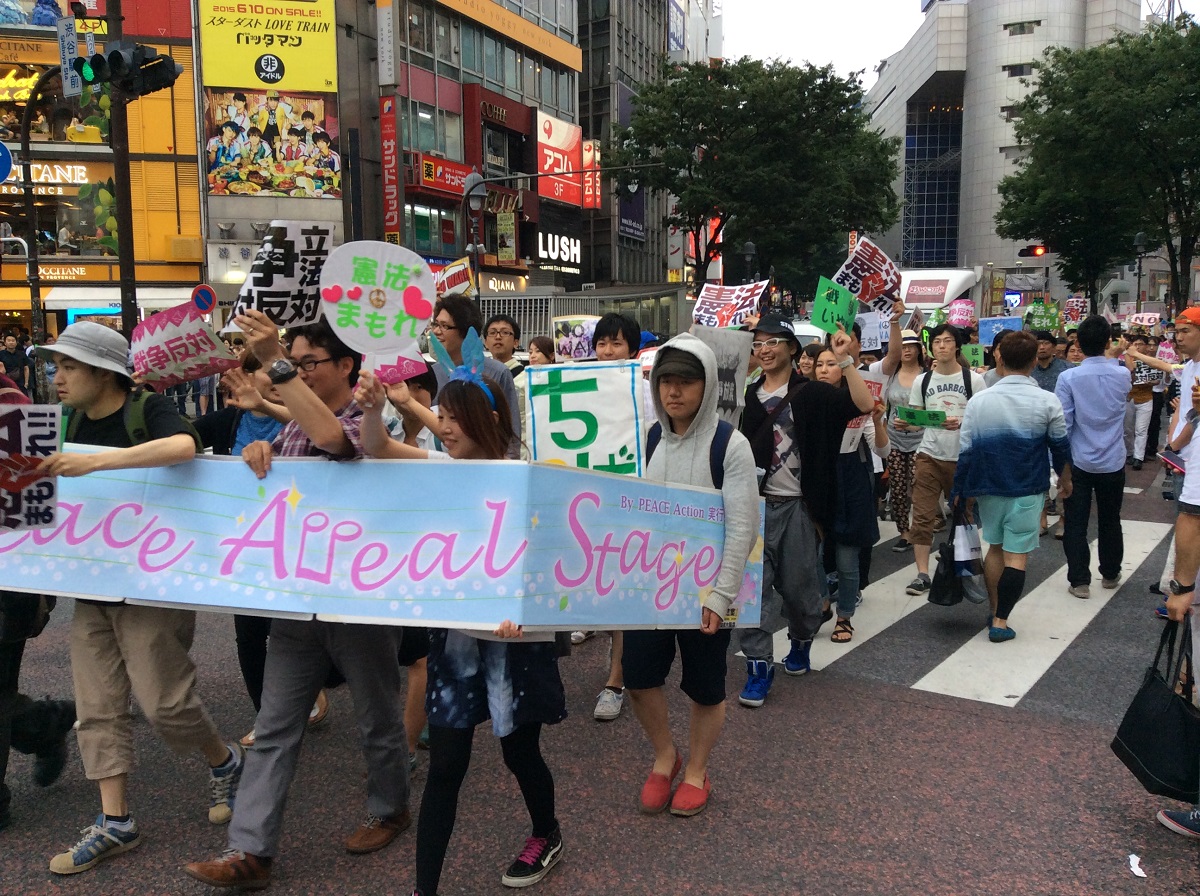 In Japan, the country’s lower house of parliament has passed controversial laws to expand the role of the country’s military. Japan’s Prime Minister Shinzo Abe wants the military to play a greater role in international security, but there’s growing opposition from those who want to defend Japan’s unique post-war tradition of pacifism. Janak Rogers reports from Tokyo.

In central Tokyo, an estimated 25,000 people recently gathered to defend something that may seem obscure but is actually vital to understanding post war Japan: Article 9 of the Japanese constitution.

It’s become the focal point of a debate that’s dominating headlines in Japan.

“Article 9 is one of the very keystones of the Japanese post-war constitution; it renounces war and says that Japan will not maintain military forces,” explains political journalist Toshiaki Miura, who writes for one of Japan’s leading daily newspapers, Asahi Shimbum,  and is a former Washington correspondent with an expertise in diplomacy and U.S.-Japan relations.

“Because of Article 9, Japan has been a largely a civilian power and it has restrained military power,” explains Miura. “Military power it has been a very low key part of Japanese politics and Article 9 played that important role in the Japanese psyche.”

Japan does a have military force – in fact a very sophisticated one. But Article 9 of the Japanese constitution limits its use to self defense. Therefore, there’s no Japanese Army as such, there’s the SDF – the Self-Defense Forces.

What’s curious though is that Japan’s constitution, which came in to force in 1947, was actually written by the Americans who occupied Japan for seven years following the end of the World War II.

Koichi Nakano, professor of politics at Sophia University in Tokyo, notes that when Prime Minister Shinzō Abe returned to power in 2012, “the campaign slogan at the time was ‘taking Japan back’ — quite literally – and that was all over Japan on posters.”

Abe, like many Japanese conservatives, takes issue with the U.S. drafted constitution.

“The post-war constitution of Japan, they say, was an American imposition and emasculated Japan forever since it has this famous Article 9 that bans the military and the use of force as a means of resolving international disputes,” Nakano explains. “What they also challenged was what they called masochistic view of history in Japan. Japan was emasculated because of the defeat in World War II, and it’s time to restore Japan’s pride as a modern nation but with ancient roots in history.”

Japan’s former ambassador to the United Nations, Shinichi Kita-oka, is currently president of the International University of Japan. A leading public intellectual, he is a close ally of Prime Minister Shinzō Abe and has been one of the driving forces of the current push to re-interpret Article 9 and expand Japan’s military role.

“Article 9 implies that the military is something that is very evil and should be limited; but this is not very good source for playing a constructive role in international peace and stability,” says Kita-oka, who like many on the conservative right believes that Japan needs to strengthen its military alliance with the U.S. to counter the rise of regional powers like China and North Korea.

“There are only a few countries that can defend themselves by their power alone,” Kita-oka continues. “Probably the U.S., Russia and China. Even the UK cannot defend itself by exercising the right to individual self-defense alone.”

The raft of security legislation currently under consideration is undoubtedly complex, but the key issue is individual versus collective self-defense. In other words: is Japan constitutionally limited to using its military to protect only itself? Or, can it expand its mandate to protect both itself and its allies?

“This is just a minor expansion,” according to Kita-oka. “It is just to expand so that if our friendly countries are attacked illegally by some country and if the situation will have a terrible impact on Japan — then Japan can consider dispatching SDF. But considering the people are very much pacifist and considering the financial circumstances, Japanese government will remain very careful in so doing.”

Opinion polls suggest that the between 60-70 percent of the Japanese public opposes revising the constitution and many have taken to the street to protest, including 34-year-old musician Kuaro Nakano.

“Seventy years we have no war, at least directly,” Nakano says. “But this is the first government I think who is really right wing and really dangerous. Its a dangerous time I think.”

Opposition galvanized in early June when three eminent constitutional scholars, including one handpicked by the government, came out publicly saying that the proposed laws are unconstitutional.

“Many constitutional scholars argue they are against it because it will erode the rule of law and the spirit of the constitution itself and the constitution will become very unstable if the government can interpret it any way they like,” explains political journalist Toshiaki Miura.

Akira Kawasaki is the director of the Japanese NGO Peace Boat, one of many organizations opposing the new security laws.

“Japanese pacifism is under serious earthquake I have to say,” according to Kawasaki. “The government is trying to make a fundamental shift. It’s about gutting the peace constitution.”

“If Japan abandons its renunciation of war,” warns Kawasaki, “then it will just trigger an arms race in the region – it’s not constructive at all. Japan should stick to the peace path and seek for mutual disarmament and a calm approach to the territorial disputes and other threats in the region.”

Japan’s ruling coalition, led by P.M. Shinzō Abe, recently voted to extended the current session of parliament until early September in a bid to pass the security bills and to gain time to win over public opinion.

On July 16, the bills passed in Japan’s lower house, and a final vote in the upper house vote – which the government is all but certain to win – is expected in the coming weeks.

Until then, protests are set to continue.