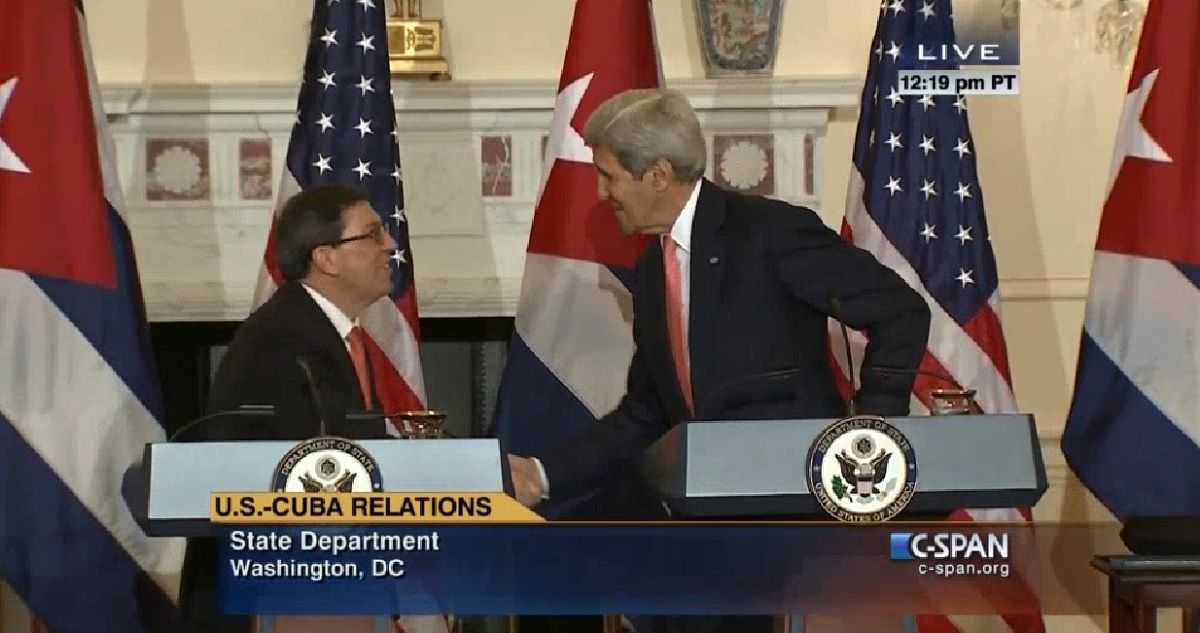 After more than fifty years, the U.S. and Cuba each reopened their respective embassies today. FSRN’s Nell Abram has more.

Cuba’s national anthem filled the air and hundreds of people cheered as a color guard solemnly hoisted the country’s flag in front of the Cuban embassy in Washington, D.C. Cuba’s Minister of Foreign Affairs Bruno Rodriguez-Parrilla presided over the ceremony.

“Today the reestablishment of diplomatic relations and the reopening of embassies complete the first stage of the bilateral dialogue and pave the way for the complex and certainly long process towards the normalization of bilateral relations,” Rodriguez-Parrilla said. “The challenge is huge, because there has never been normal relations between the United States of America and Cuba, in spite of one-and-a-half centuries of intensive and reaching links that have existed between both peoples.”

Rodriguez-Parrilla was clear that while the ceremonies officially restart diplomatic relations, Cuba has very specific conditions that must be met before they will consider relations to be normal.

“Only the lifting of the economic, commercial and financial blockade, which has caused so much harm and suffering to our people, the return of the occupied territory at Guantanamo and the respect for Cuba’s sovereignty will lend some meaning to the historic event that we are witnessing today,” he said.

The Cuban flag was also raised at the State Department, where it now stands alongside the flags of other countries with which the U.S. has diplomatic ties. And in Havana, the U.S. Interests Section formally became a U.S. Embassy.

Later Monday, the Cuban Foreign Minister met with U.S. Secretary of State John Kerry and then held a joint press conference. Kerry reiterated the White House’s call for Congress to lift the embargo, but said clearly that the U.S. has no plans to vacate the naval base at Guantanamo Bay, where the military continues to operate a detention camp that President Barack Obama pledged to close during his first week in office.

“At this time there is no discussion and no intention on our part at this moment to alter the existing lease treaty or other arrangements with respect to the naval station,” the Secretary of State said. “But we understand Cuba has strong feelings about it and I can’t tell you what the future will bring, but for the moment that is not part of the discussion on our side.”

The official restart of bilateral relations follows a series of recent diplomatic moves between the two countries. After months of secret negotiations, last December President Barack Obama eased some travel and financial restrictions when the two countries exchanged prisoners: U.S. government contractor Alan Gross and an unnamed spy for the last three of the Cuban Five intelligence agents. Cuba also freed 50 political prisoners as part of the deal. Then in May, the U.S. removed Cuba from its list of state-sponsors of terrorism.

But there’s still staunch opposition in Congress to lifting the embargo against Cuba and furthering the thaw between the two countries, particularly in the South Florida delegation. Representative Ileana Ros-Lehtinen accuses the State Department of failing to take a stance against repression in Cuba where she says the Castro regime continues to attack its people and accuses President Obama of “legacy shopping.”