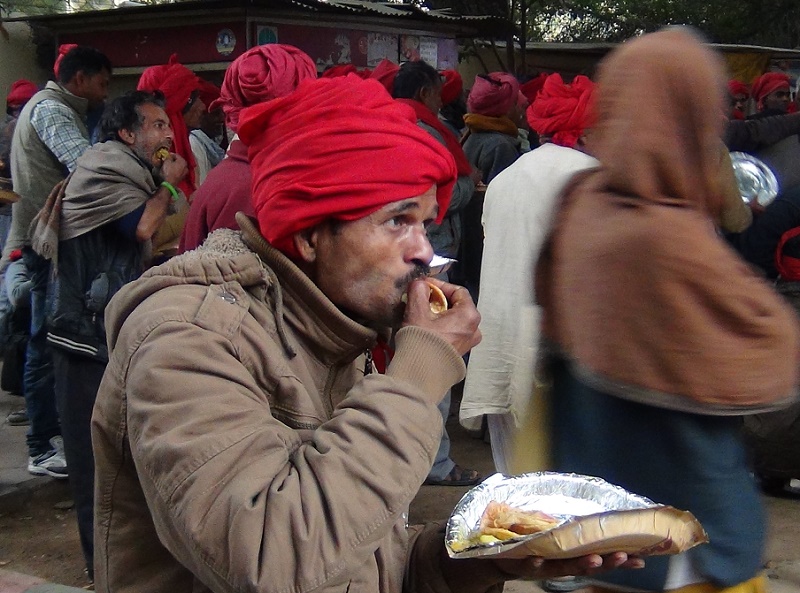 India is home to the largest number of hungry people in the world. According to the United Nations’ Food and Agricultural Organization, nearly 200 million people are undernourished in India – the highest number for a single country. India runs several government funded nutrition programs and also has a national food security law in place. But due to widespread corruption, these measures have done little to alter the situation. However, a unique food bank in India’s northern state of Uttar Pradesh is effectively fighting hunger at local level. Bismillah Geelani reports.

In a small room in Bundelkhand area of the northern state of Uttar Pradesh, a group of volunteers is seated around a table. On top of the table is a heaping pile of home-cooked bread and packets of vegetable curry.

Sixty-year-old Tara Patkar is showing the volunteers how to make individual food packages, putting two breads and a curry in each.

Just outside the room, a sign board written in Hindi reads Roti Bank, or Bread Bank.

“The banks that people usually know deal with money,” explains bank manager Tara Patkar. “But Roti Bank is different. It deals in bread, rice, vegetables and other food items. The aim of this bank is that no one should go hungry. So we take food from those who have it, and give it to those who can’t afford it.”

The Roti Bank began its work earlier this year and initially focused on the people begging for food at the local railway station.

Chandabai is blind. She and her family of five often went without food, but now they get it home-delivered.

“People often ignored our pleas for food,” recalls Chandabai. “But now with this Roti Bank we don’t have to worry about food. We get enough without even asking for it.

The Roti Bank operates through dozens of dedicated volunteers who go door to door collecting home-cooked food from local residents. They then gather it at their six offices, package it, and then deliver to local residents in need. The bank maintains a register with the details of all those needing their assistance.

“There are so many poor and homeless people that we know don’t have access to food,” says Haji Mastan, one of the bank’s founders. “There are many others who face the same situation but they don’t tell anyone about it. We decided we won’t let anyone go without food and made this humble effort.”

The Roti Bank began with just 14 families contributing food. But after two months, the number of contributing households is now several hundred – allowing the bank to serve more than five hundred families.

Lali Devi is among the bank’s first contributors.

“There is so much poverty here, people are dying of hunger,” describes Devi. She doesn’t wait for the volunteers to arrive at her door. Instead she walks more than a mile every day to personally deliver her donation of food to the bank office. “And if our small contribution to this bank can keep someone alive… nothing should hold us back from doing that.”

Uttar Pradesh is one of India’s most populous and poorest states. It is also a region where the largest numbers of communal riots take place. Here, the Roti Bank has become a symbol of communal harmony between Hindus and Muslims, who work together to ensure that fewer of their neighbors go to sleep with an empty stomach.

For twenty-eight-year old Mohammad Asgar, volunteering at the Roti Bank is deeply satisfying.

“What we get from this work is something that we can’t get by praying in a mosque or a temple,” Asgar says. “This is a service to humanity and there can be nothing more fulfilling than serving fellow human beings.”

The initiative is being hailed by both individual citizens and authorities alike. Offers of funding the initiative are pouring in from various quarters, but the bank’s founders are turning them down. They say funding may kill the very altruistic spirit that brought the bank into existence. They also fear that donors with vested interests might try to use the work to further their own agendas.

The founders hope their work will inspire people in other parts of the country to initiate similar grass-roots projects to battle India’s rampant hunger.