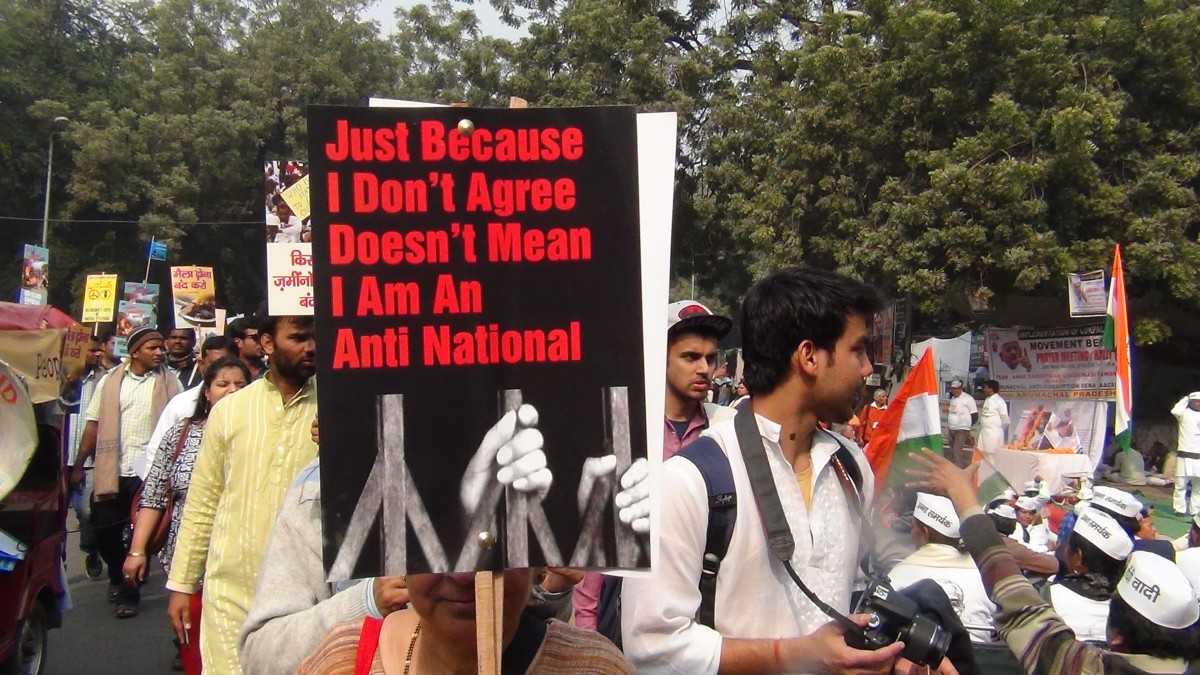 A police crackdown on a prestigious Indian university and the arrest of some of its students on charges of sedition has sparked protests from student groups at other Indian universities.

The arrested students are accused of chanting anti-India slogans at an event to commemorate the hanging execution death of a Kashmiri Muslim for his alleged role in the 2001 terrorist attack on Indian Parliament. The hanging had evoked massive protests in the Indian-administered Kashmir and many Indian intellectuals and human rights defenders had also opposed it, citing trial irregularities. As Bismillah Geelani reports, many students see the crackdown as an attempt by the BJP government to curb freedom of speech on the campuses.

At New Delhi’s Jawaharlal Nehru University (JNU), Marxist Communist Party leader Brinda Karat is addressing a gathering of more than a thousand students. Several other opposition leaders are also present to express solidarity with the students who are boycotting classes and have been staging a sit-in protest since last week.

The protests began after the arrest of the Student Union president Kahayya Kumar, who is now facing sedition charges. Authorities accuse Kumar of shouting anti-India slogans at an event commemorating the third anniversary of the controversial execution of Mohammad Afzal Guru, a Kashmiri Muslim convicted of participating in the 2001 attack on India’s Parliament in a widely-criticized trial.

But students like Priya Devrit insist that Kumar was not even taking part in the event, but did intervene when some right wing students tried to disrupt it.

“What he was essentially trying to do was preserve the right to dissent and allow democratic freedoms of speech for students, irrespective of where they belong, because even the right wing says extremely hard lining things, but the fact is that they say it, we let them say it, so if the extreme left takes a position to support self-determination movements of certain people, what’s wrong?” Devrit asks. “The whole point is why such dissent is being scuttled in JNU?”

The police have also arrested a professor of Delhi University and charged him with sedition for organizing a similar event in the capital. And a nationwide hunt is now underway to arrest dozens of other students believed to have participated in the JNU protest.

Home Minister Rajnath Singh says the government will not tolerate such activities.

“I have given necessary instructions to the commissioner of Delhi police about the JNU incident and the government is committed to act tough against such people,” Singh says. “Anyone chanting anti-india slogans and questioning the unity, integrity and sovereignty of the country will not be spared.”

The JNU has traditionally been the stronghold of leftist groups. It’s also known as the country’s most liberal university campus with a long tradition of providing space and support to various people’s’ movements. Hindu nationalist groups, like the BJP, have often described the university as ‘a den of anti-national elements’ and many view the current crackdown on the students as a form of political revenge by the Narendra Modi-led BJP government.

JNU student Devrit says the government is trying to impose a narrow definition of nationalism on the country.

“The common sense in India has become that university spaces should align with a certain decorum which falls in with nationalist tendency, especially with this government in power, because before this we’ve had supporters of Maoist movement, it doesn’t mean they are anti-national,” Devrit explains. “They are talking of indigenous people’s rights, so by that definition everyone will become anti-national. It will be very few people then in a university space who you can actually straight-jacket into this frozen sense of nationalism.”

Students and teachers from several other universities are also taking to the streets in solidarity, terming the crackdown on the JNU as an assault on freedom of speech and campus autonomy.

The current demonstrations at the JNU and other universities come just weeks after Dalit student protests erupted in the southern city of Hyderabad after an expelled Dalit student committed suicide. The BJP government is now on the defensive against what appears to be a slowly but steadily growing student movement.

Calls are also growing louder for the revocation of the colonial-era sedition laws, which critics say are being used to criminalize lawful dissent and political opponents.