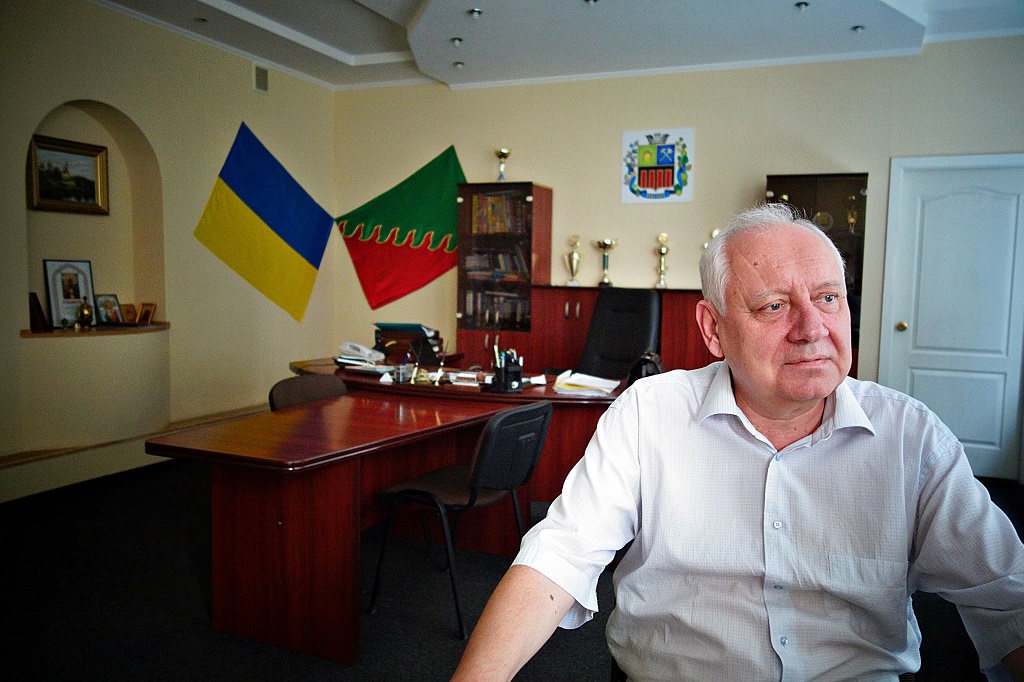 Yuri Cherkasov head of Avdiivka’s city council believes people have not only become tired of the war but also are now become afraid of the peace and calm around the city. (Photo Credit: Filip Warwick)

A truce that began September 1st appears to be holding in eastern Ukraine. The date coincided with the beginning of the school term – a so-called back-to-school ceasefire. Civilians are cautiously optimistic that some semblance of normal life will return, but many are still skeptical. Filip Warwik reports that on the front line, Ukrainian soldiers see a reduction in hostilities but are nevertheless wary of the current lull.

The front line is quiet and the on-going ceasefire appears to be holding. But the line also has a secondary purpose: it forms a border between Ukraine and what the Kiev government calls the “occupied territories,” also known as the Dontetsk and Luhansk Peoples Republics.

“We can’t travel to see our relatives, to see them, we can’t help them,” says Sveta Nikoleyeva. She’s from the village of Trokhizbenka in the Luhansk region of eastern Ukraine, just 30 miles from the Russian border. It’s a strategic point along the Ukrainian front line as it provides access to a bridge across the river Donets. The bridge was blown up some months ago and all passage is closed to traffic and civilians.

While the ceasefire allows people to travel around the region, Nikoleyeva laments not being able to cross the river; to see relatives in the separatists controlled city of Luhansk, about 25 miles away. Trokhizbenka is tied to the city of Luhansk not only economically, but also socially.

“The situation on the separatist side is very difficult especially with goods and pensions,” she explains, worrying about loved ones on the other side of the border. “If the local separatist authorities are unable to help them, then at least we want to feed our friends and relatives. We just want to cross the bridge legally to help. We understand that we live in difficult times.”

Sveta’s father is ill and lives in Luhansk, where medication is hard to come by. The closest border entry point is 75-miles away, and with an aging and dilapidated infrastructure in the region — the journey is time consuming and costly.

While living conditions may be deteriorating in the pro-Russian separatist area, there are Ukrainian citizens in Ukraine who support the separatist cause, albeit secretly. Anastasia Petrovna, one of the teachers at the Trokhizbenka school, believes conflicting loyalties have had a detrimental effect, with neighbors and relatives cutting off ties.

“Some people on the Ukrainian side support the separatists,” Petrovna says. “And some on the separatists’ side are not happy things are finally working out here [in Ukraine] — that school was ready for the first day of term.”

Many schools along the front line were either destroyed or damaged during the recent months of fighting. On the Ukrainian side, Kiev and numerous volunteer groups helped village schools get back on their feet — delivering blackboards, uniforms and Ukrainian books.

Across the de facto border, pro-Russian separatist authorities re-vamped their syllabus, changed the grading system from Ukrainian to Russian and will provide students with Russian diplomas. Their aim is to be in-line with Russian educational norms and to facilitate applications at Russian universities.

Just more than six miles from the separatist controlled Donetsk airport is the Ukrainian village of Pervomaiske. School teacher Natalia Dudareva beams with joy and enthusiasm; the school doors are open again – but there is still much work to do.

“The school building is not yet ready for the autumn and winter season due to the damage caused by shelling over the past few months,” the teacher says. “But all of the parents are pulling together resources to get the heating system going.”

Many parents gathered for the inauguration of the school year. But many, like Yevgenia Anderivich, are not optimistic about the current ceasefire holding up in the short run.

“We want the ceasefire to hold but we don’t believe it will, just as before,” a dubious Anderivich says. “At the moment it’s been quiet for past few days. Now we are afraid of this quiet period. You fear this silence and expect the worse, most of all in the evenings and at night.”

About nine miles from the Donetsk city center is the industrial city of Avdiivka, also under Ukrainian control and home to the Avdiivka Coke and Chemical plant which before the war was the largest coke producer in Ukraine. As a front line city it experienced heavy shelling in recent months.

Yuri Cherkasov is head of the city’s council: “A type of psychological and emotional pressure is upon the city, and it’s not because the people here are bad or good, it’s because they have become tired of this war. People have now become afraid of the peace and calm around the city. They hear silence and they think something will happen.”

For those who have remained or have recently returned to the city, Yurij says the Ukrainian government continues to provide social assistance to various groups who need financial or material aid: single mothers, disabled children, Chernobyl rescue workers, Afghan war veterans.

Walking along front line positions facing the separatist-controlled Donetsk airport, a Ukrainian officer points out the remains of a Soviet wire-guided ground missile – it hit, he says, on the first day of the cease-fire, but all has been quiet since.

“You need to believe in the ceasefire,” the soldier, who did not give his name, says. “We, as soldiers, follow orders but look at the faces of the local residents here, the people who live a few kilometers from the front line, you can see it in their eyes and faces; they are tired of this war.”

Despite a little more than a week of calm, Ukrainian president Petro Poroshenko says the country still faces the threat of a full-scale Russian military offensive. Those living in front line towns and villages hope the President’s message is just a war of words.