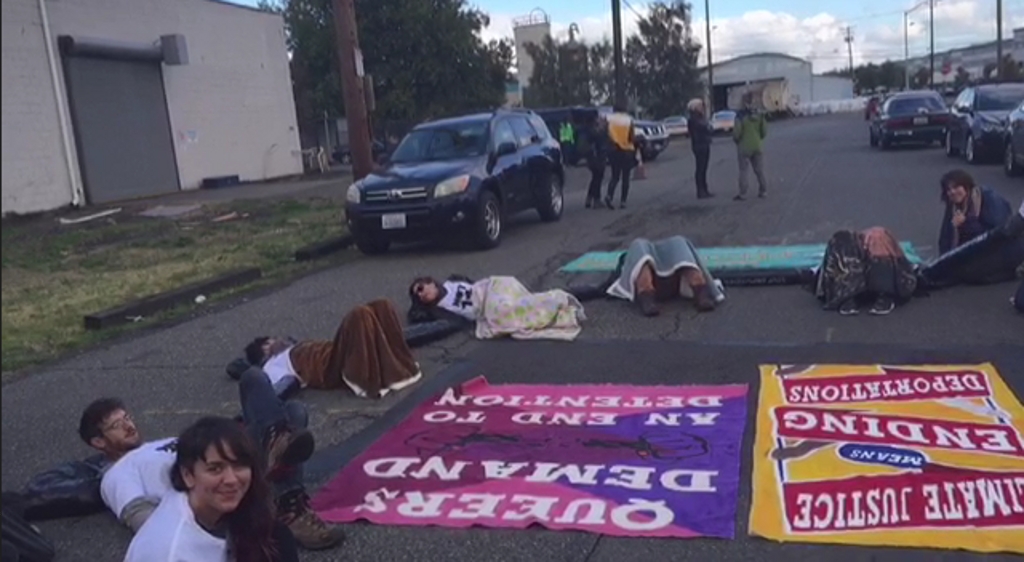 Screenshot from livestream of the blockade outside if the NWDC on Sept 21, 2015.

A group of activists locked down in formation at the entry and exit points of a privately-owned and operated immigration detention center in Washington state this morning. Shannon Young has more.

Members of the Northwest Detention Center Resistance Coalition blocked access points to and from the facilty in Tacoma Monday morning in what they say is a direct action to prevent deportations and call attention to profiteering from detention quotas.

“Thirteen of us here are locked together in the group I’m in, but there are people locked at three different entrances,” said protester Dean Spade, describing the scene by cell phone. “There’s the Raging Grannies at another location and another group. We’ve got our arms locked into these tubes and we’re just trying to stay as comfortable as we can in this awkward position. And we’ve got a bunch of beautiful banners on the ground and we’re listening to some music.”

Spade says the group chose a Monday to protest because it’s a day in which the center tends to transport immigrants to the airport for deportation to their countries of origin.

It’s not the first time the Northwest Detention Center has seen protests. Detainees at the GEO Group owned and operated facility staged a series of hunger strikes there last year and multiple solidarity actions have occured on the outside.

The center is one in a large network of for-profit detention facitilies with government contracts to hold immigrants prior to deportation. The budget for Immigration and Customs Enforcement includes a mandate that the agency have enough funds on hand to hold 34,000 immigrants in detention on any given day.

President Obama’s administration has carried out more than two million deportations, however the pace was expected to slow after he announced executive actions to extend temporary relief from deportation to qualifying members of mixed status families.

“To me, it’s clear that President Obama finally took executive action because of actions like this, because activists turned up the heat and said that we would not tolerate the existing system of immigration enforcement and its abuses,” said Spade.

Obama’s executive actions, which affect an estimated five million immigrants living the U.S., have yet to take effect due to legal challenges from Republican-run states.

One controversial policy the administration has doubled-down on is that of detaining Central American women and children seeking asylum in jail-like settings while their petitions are under review.

On Friday, the administration appealed a ruling by federal judge Dolly Gee that mandated the government release child detainees by October 23rd. In the meantime, Homeland Security Secretary Jeh Johnson released a statement indicating the so-called family residential centers will be transformed into processing centers with shorter detention periods.