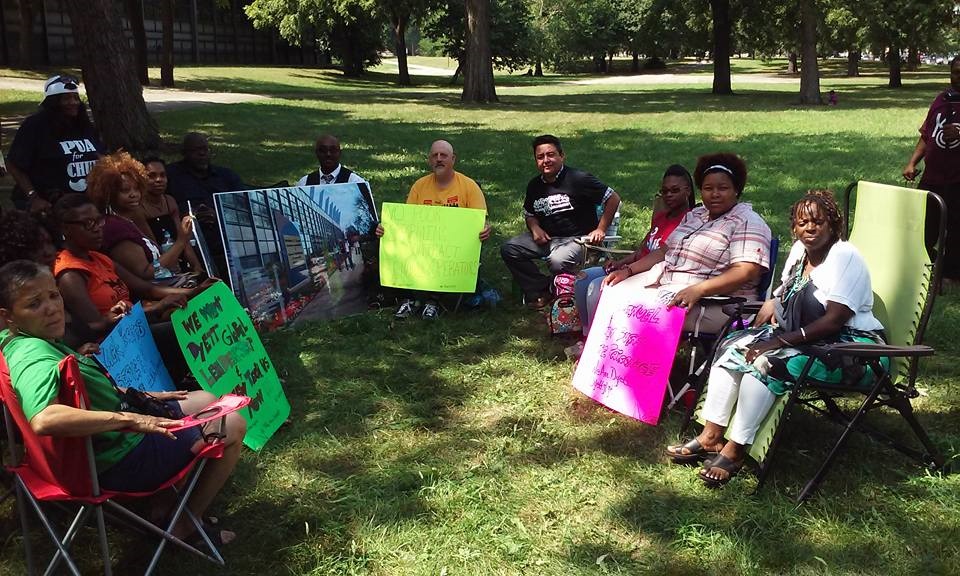 12 of the 15 #FightForDyett hunger strikers began their action on Aug. 17, 2015. (Photo courtesy of Jawanza Malone)

A hunger strike to regarding the future of a shuttered public high school in Chicago is now in its 4th week… and is growing. On Wednesday, three more people joined the original 12 hunger strikes – parents, educators and local advocates – who began their action demanding more input regarding the future of their community high school – Dyett Academic Center. FSRN’s Nell Abram has more.

Located on the south side of Chicago, the school was one of a dozen pegged for phase-out in 2012 as part of a controversial approach to addressing what some call “failing” schools by closing them and then “turning them around.”

The model was backed by No Child Left Behind and then President Obama’s Race to the Top programs. But education reform advocates say the method is misguided, fails to address the underlying issues of socioeconomic inequality in the education system, and places undue burden on adequately performing schools.

Community members have long urged the city to reopen Dyett as a global leadership and green technology high school. But last week, Chicago Board of Education officials announced they intend to reopen the school in 2016 under a different model. Anna Jones joins us. She’s the mother of four, a member of the parent advisory council at nearby Woodson Elementary school and one of the now 15 hunger strikers.