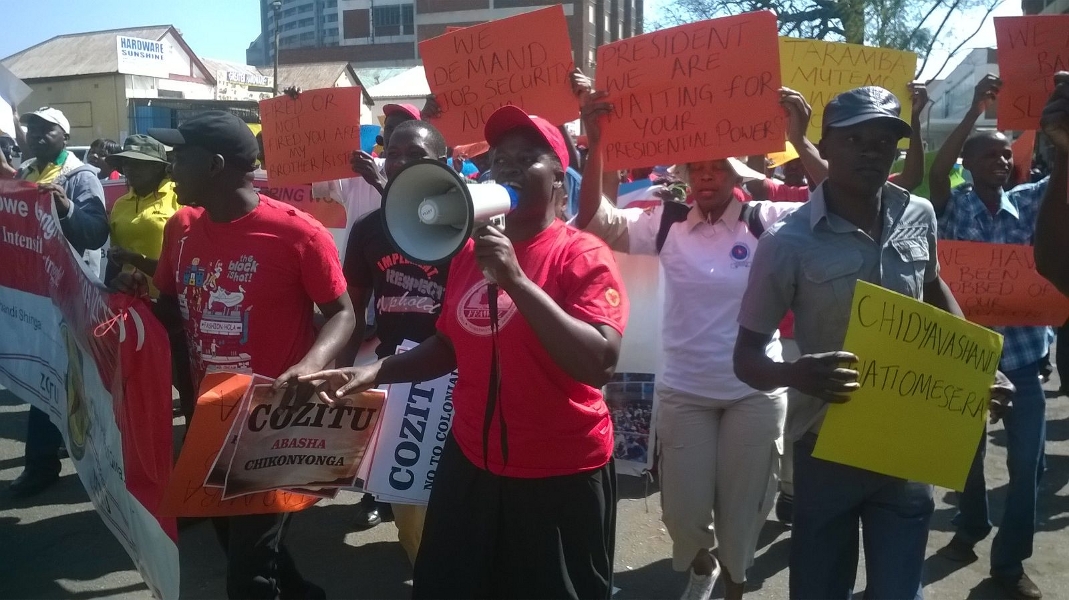 In Zimbabwe, a Supreme Court ruling has made it easier to terminate the contracts of workers from both the private and public sectors. Thousands of workers have already received the newly-required 90 days notice that they may soon be out of a job. This, in a country with one of the highest unemployment rates in the world. FSRN’s Garikai Chaunza reports from Harare.

The most stable form of employment in Zimbabwe is in the public sector, but it comes at a great cost. An estimated 80 percent of the national budget goes to maintaining government jobs.

Officials have been seeking ways to downsize the public sector and – in July, the country’s Supreme Court issued a ruling to make it easier.

Prior to the landmark ruling, employers had to seek permission from the Ministry of Labor before laying off workers. They also had to pay severance packages to the affected employees. Now all that is required to terminate a contract is 90 days notice.

“This then means workers are now at great risk because the employer now has unlimited power to dismiss,” says labor law expert, Frank Hwinikwa. He adds the ruling also limits a worker’s ability to legally challenge an unfair dismissal or to negotiate severance when an employer declares bankruptcy.

Zimbabwe owes around 10 billion dollars to international financial institutions, including the IMF and the World Bank. And creditors have been demanding reforms to Zimbabwe’s labor laws and cuts to the public sector as conditions for negotiations.

In May, Finance Minister Patrick Chinamasa told a visiting IMF delegation that Zimbabwe was in the process of easing its labor laws and implementing complementary reforms. “We are going to modernize our labor laws to enhance labor market flexibility,” Chinamasa said at the time.

Rejoice Ngwenga, economic analyst and president of a policy dialogue think tank, Coalition for Market and Liberal Solutions, sees a direct link between the IMF demands and the Supreme Court labor ruling.

“Zimbabwe has been always on a trajectory of unemployment but when you talk about government austerity measures the IMF put several conditions and one of these conditions for re-engagement is that government cut its public expenditure because 80 percent of the revenues are going to the wage bill,” points out Ngwenga. “So there is a direct link with what the Finance Minister Patrick Chinamasa is saying and trying to do and what the staff monitoring project IMF is demanding.”

Mass layoff notices have already been issued at the state-run Zimbabwe Broadcasting Corporation and the National Railways of Zimbabwe, affecting 500 and 1200 workers respectively.

Lorraine Chimukai – a longtime ZBC news and current affairs producer – says she was shocked to receive a contract termination letter at her home one weekend.

“I am disappointed after having been loyal to the company for such a long time. Remember there was a time when the company was not even paying its workers their full salaries and we had to subsidize,” recalls Chimukai.  “It’s disappointing, it’s frustrating and it’s painful.”

Dismissed public sector workers have few options in the private sector. Zimbabwe’s unemployment rate currently hovers at around 80 percent. Many people subsist in the so-called informal sector, selling wares on the streets or doing odd jobs without receiving benefits.

Tafadzwa Choto, director of the non-governmental Zimbabwe Labour Centre, says taking away job stability from public servants will fuel a “race to the bottom” to provide cheap labor for foreign investors.

Labor unions and social movements have been staging protests to demand action from President Robert Mugabe, but the peaceful demonstrations have been shut down by police who argue the rallies are unlawful.

In Zimbabwe, protesters must seek permission from the authorities two weeks ahead of any planned action to petition the government.

But Munyaradzi Gwisai, a University of Zimbabwe professor and International Socialist Organization member, says the government will not act without pressure from people in the streets.

“If the workers, the youth the students, if they protest like they did in 1997 to 2000 then the courts will listen, and then President Mugabe will listen,” Gwisai explains. “But if they wait and think that Mugabe will deliver them they will wait until heaven comes.”

In his recent State of the Nation address before parliament, President Mugabe ignored the controversial labor issue and blamed corruption for the deteriorating economy.