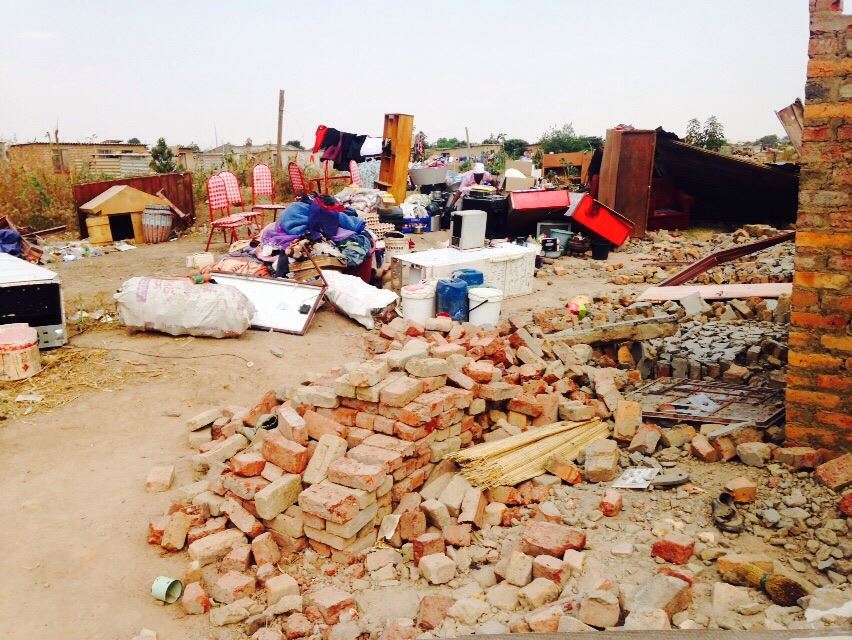 As many as 4,000 families in Zimbabwe are in limbo after facing down bulldozers during the holidays. At least 1000 others became homeless after officials ordered their houses demolished just before Christmas, the latest in a series of settlement evictions and demolitions. All told about 20,000 families were left homeless last year in the metropolitan area of Zimbabwe’s capital, Harare.

Authorities argue the homes were built illegally on squatted lots and cite a shortage of available land in the city. That shortage of land for the country’s poor was one of the reasons used years ago to justify large-scale government expropriation of white-owned farms.

But as Garikai Chaunza explains, despite the decades-long policy of taking farms from white landowners to provide for the poor, the property was never publicly developed for housing. It wound up in the hands of the politically-connected, who parceled it out to the very people who now face the destruction of their homes as local city officials seek to reclaim jurisdiction over the land within the capital.

The current housing crisis in Harare has been more than twenty years in the making. That’s how long it’s been since the Harare City Council zoned any new land for private homes. The local government largely, though never officially, relinquished land use control to independent housing cooperatives controlled by mainly Zanu PF politicians.

The result was a system of political patronage in which aspiring home builders align themselves with a handful of ruling party power brokers.

Now the city council is trying to regain control of zoning. But rather than grandfathering in the settlements that grew on disputed land during the past two decades, city officials are targeting homes constructed without formal council approval and ordering their demolition, with only 48 hours notice.

“For the past 20 years, we have not been servicing land, but now we have realized that to feel the gap that has been created we are going to service land beginning this year and we have also realized that people were being cheated out of their money by unscrupulous management committees of housing cooperatives,” says Harare City Council spokesperson Michael Chideme. “People have been paying money for the past ten years, fifteen years but with no meaningful development on the ground.”

Beginning in 2000, the government began expropriating white-owned commercial farms, saying it needed the land to provide housing for the rapidly growing Zimbabwean population. But it wasn’t everyday people in need of housing who benefited from these land seizures. It was ruling Zanu PF party leaders, some of whom became land barons in their own right, parceling up and selling the land they’d acquired through political spoils.

Now, the people who bought those parcels are paying the highest price as demolitions move forward.

In November, President Robert Mugabe ordered another spate of demolitions, this time at Dunstan farm, home to 5,000 people. The land on which Dunstan Farm sits belongs to a politician Mugabe sacked from his Zanu PF party last year. Mugabe argues the settlement, which is near the Harare International Airport, is an “eyesore” that tarnishes the image of the country.

Acting on the president’s directive, during the Christmas holiday the Harare city council ordered city workers to storm the settlement and demolish all of the homes there. They cleared nearly 1,000 houses, before the area’s local Member of Parliament, Shadreck Mashayamombe, intervened, appealing for more time to arrange for alternative housing for those displaced.

But not only are residents still waiting, they say alternative shelter isn’t enough, claiming they paid for the parcels of land.

One middle aged woman, whose Dunstan Farm home was destroyed before the demolition was interrupted, says her family was left with nothing.

“Our children and our properties are outside, and we have nowhere to go because they just came here and destroyed our houses,” the woman says.

And despite successfully negotiating a pause in the destruction, one local resident says MP Mashayamombe hasn’t followed up.

“The MP [Mashayamombe] came here and promised us that he was going to give us alternative accommodation and never returned,” the resident points out.

As the uncertainty continues into the new year, another resident worries about access to basic hygiene and sanitation, explaining “We do not know if it is proper, health-wise, to be settled where there is no water and toilets.”

For the past two years, the Zimbabwe Lawyers for Human Rights hav been challenging housing demolitions under a provision of the new constitution. The group’s program manager, Dzimbabwe Chimbwga, says the legal maneuver has been successful in other cases.

“We have seen demolitions in Chitungwiza where we have challenged those and managed to stop some in Epworth, points out Chimbwga. “So in that sense we can say the new constitution is a success to the extent that it gives us a legal framework through us lawyers to protect people’s rights and that is a positive.”

Zimbabwe’s constitution, which only took effect in 2013, states authorities must seek a court’s permission before demolishing private homes. If permission is granted, authorities must find alternative accommodation for the displaced and compensate them before relocation.

But so far, that hasn’t happened. For those people still living at Dunstan Farm and expecting demolition crews any day, it remains to be seen if the state will honor its obligations under the nation’s new constitution.