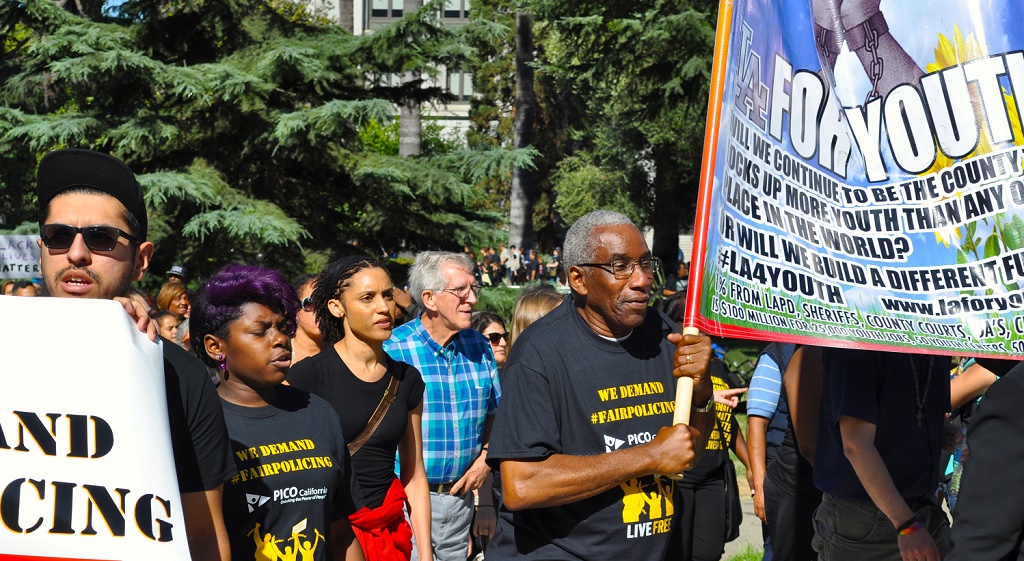 California Governor Jerry Brown has signed a slew of progressive bills into a law this month, from climate change to pay equity to assisted suicide. One of the most contentious bills strengthened the state’s racial profiling law by forcing law enforcement organizations to report the race of every person stopped by officers. Police associations were strongly against the law, but advocates say it will go a long way toward holding police accountable for actions based on racial bias and stereotyping. FSRN’s Larry Buhl has more from Los Angeles.

It’s about hard data and transparency, and California’s old racial profiling law didn’t offer much of either, according to advocates of the new bill passed earlier this month.

The Racial and Identity Profiling Act of 2015, introduced by Assembly member Shirley Weber, puts specific reporting requirements into its mandates. Officers must record the gender, race and perceived national origin of every person they stop, and whether they took any further actions against that person.

Those data will be given to a new Racial and Identity Profiling Board made up of law enforcement, community members and justice experts. The board will hold three open meetings a year, inform enforcement organizations where they see racial bias occurring and recommend reforms. The data will also be available to the public.

While the Board will not have the power to mandate reforms, police accountability advocates are praising the law for its transparency and its aim to keep police accountable.

“From a practical standpoint we will get data from across the state that shows how pervasive racial profiling is,” explains Rosa Aqeel, legislative director for Pico California, a faith based community organizing network and one of five co-sponsors of the bill. “In a broader sense we hope it serves as a catalyst for a change in the way law enforcement polices our communities. We think there needs to be a dramatic shift in the culture of policing and this is a first step.”

But law enforcement sees the law as an intrusion into their jobs. All major state law enforcement groups fought the bill hard, arguing that its reporting requirements would create extra work for police and cost the taxpayers too much. Some, like the president of the Long Beach California Police Officers Association, deny any racial profiling exists and that all stops made are done for legitimate reasons not having to do with race.

Melina Abdullah is a professor and chair of pan African studies at Cal State University Los Angeles and organizer with Black Lives Matter. She disagrees with the bill’s detractors and says police do stop and arrest people of color at a far higher rate than whites.

“The core argument is race is not a criminal act,” Addullah says. “Being black is not a criminal act it’s not a crime to walk while black, to drive while black and that kind of policing that acts as if it is a criminal act needs to stop immediately. When they engage in police brutality against folks who they say were resisting arrest, well why were you trying to arrest them in the first place? We need to look at how ending racial profiling will have a widespread effect in ending state violence.”

The latest statistics from the U.S. Department of Justice show black drivers are 31 percent more likely to be pulled over than white drivers, and that police are twice as likely not to give a reason for stopping them. Hispanic drivers are stopped at a rate six percent higher than whites nationwide, according to the DOJ.

Just more than half of U.S. states currently have at least one law against racial profiling. But their reporting requirements vary widely, and only 19 states have mandatory reporting of race like California’s new bill does.

Advocates say that instead of creating extra expense, legislative efforts to curb racial profiling could save money.

“What we have seen is that law enforcement agencies across state and nation have had to pay out millions and millions of dollars to pay off settlements, to pay for wrongful death lawsuits so when we talk about cost we’re not looking at the full scope of the cost associated with law enforcement activities that lead to death or violence against civilians,” according to Pico California’s Aqueel.

Melina Abdullah says laws like California’s could also save police a lot of time, by making them think about who they really need to stop.

“If you take this as a deterrent measure to racial profiling, maybe the next time they go to stop someone for driving while black or walking while brown they will double think that and say ‘Maybe I don’t need to do that stop because they didn’t do anything illegal.’  So maybe it will save them time if it serves as a deterrent to the behavior they are used to.”

But even the fiercest advocates of these laws admit they won’t fix everything that’s broken about policing, and they won’t ease all tensions between law enforcement and communities of color.

Jack Glaser is a social psychologist and associate dean at the Goldman School of Public Policy at UC Berkeley. And he’s the author of “Suspect Race: Causes and Consequences of Racial Profiling.” Glaser says collecting data is a good step toward understanding where profiling is happening, but it won’t completely solve the problem.

“The law bans racial profiling and mandates collection of data relevant to it but banning it is not sufficient to stop it because police officers already know they shouldn’t be doing it,” Glaser says. “And a lot of it is occurring unintentionally because of the stereotypes in their heads. The problem needs to happen through changes in policy and how policing is done. One approach might be to reduce the amount of discretion in who officers can stop and search. Right now they have a tremendous amount of discretion.

Glaser says that it’s not just law enforcement culture, but American culture generally, that leads to racial bias in policing: “The research is clear that stereotypes linking African Americans with crime are pervasive. But even if you don’t endorse those stereotypes consciously but just being aware or even thinking other people hold them of them is sufficient in altering your perception. A lot of this is cognitive bias and a lot operates out of conscious awareness and control, which is why banning racial profiling is mostly insufficient.”

There are some unknowns with the California bill, such as whether departments where racial profiling is shown to be happening will make any adjustments the Board recommends.

At the national level, earlier this year Michigan Congressman John Conyers introduced the U.S. End Racial Profiling Bill in the House of Representatives. But similar measures have been introduced in every Congress since 2001, and nobody expects this year’s bill to pass – or even to be brought up for a vote. That means for the time being, battles to combat profiling must be fought state by state.