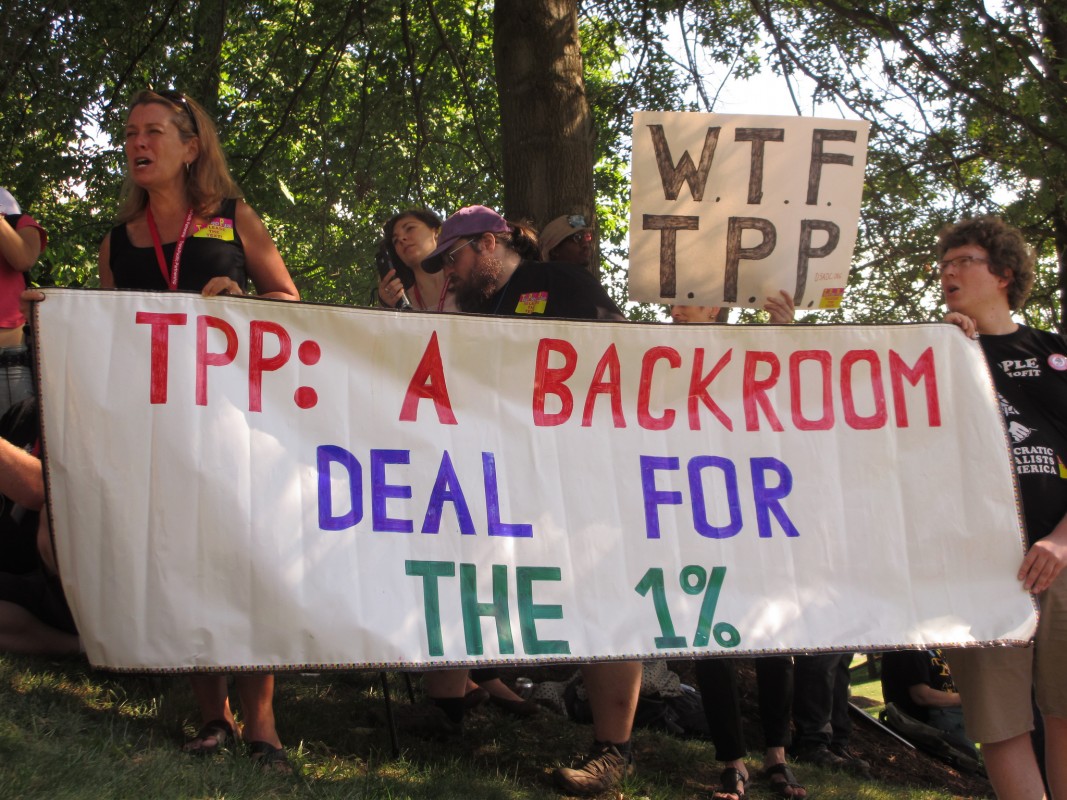 After five years of behind closed door talks, trade ministers from a dozen nations announced they reached agreement on the massive and controversial Trans-Pacific Partnership. FSRN’s Nell Abram has more.

United States Trade Representative Michael Froman read the formal announcement on behalf of the trade ministers of the 12 nations party to the deal as they concluded their ministerial in Atlanta Monday. Ambassador Froman said they view the Trans Pacific Partnership, or TPP, as a tool to drive sustainable growth, inclusive development and innovation across the Asia-Pacific region.

“In addition to liberalizing trade and investment between us, the agreement addresses the challenges our stakeholders face in the 21st century while taking into account the diversity of our levels of development,” reads Froman. “We expect this historic agreement to promote economic growth, support higher paying jobs, enhance innovation productivity and competitiveness, raise living standards, reduce poverty in our countries, and to promote transparency, good governance, and strong labor and environmental protections.”

The negotiators hammered out specifics of the massive trade pact in secret talks spanning the past five years. Citizens Trade Campaign, Wikileaks and other groups published parts of the drafts leaked along the way, sparking increased concern among labor rights advocates, environmentalists and public health groups.

Melinda St. Louis is Director of International Campaigns at Public Citizen’s Global Trade Watch joins us to discuss the agreement and where the TPP goes next. Welcome to FSRN.

NELL ABRAM: TPP trade ministers announced that they finalized the controversial and massive trade agreement that’s been negotiated behind closed doors. Do we know any more about the specifics of the deal today?

MELINDA ST. LOUIS: Unfortunately, while they’ve announced the deal, they have not released the text of the deal. So we still are forced to have a fair amount of guesswork where things have been leaking out, little by little. What we do know is that the deal, unfortunately, did not follow the demands a broad swath of the U.S. public and many members of Congress to have a different approach to U.S. trade policy that’s different from the past agreements that have led to job loss and depression of wages and undermined food safety and access to medicines. And what we’ve seen is, basically, the same type of deal only expanding it now to 40 percent of the world’s economy, that has extreme corporate rules, that expands monopolies for brand named medicines that that will keep drug prices high and could have very serious implications and much more. We expect that when the deal is made public, hopefully soon, they need to do with within 30 days after finishing a deal, but we don’t know yet if they have actually finished the entire deal or whether this is more of an agreement in principle and they’ll have to negotiating. In any case, we believe that when the U.S. public and the public in other countries see what’s in there about the threats to jobs and wages and safe food and affordable medicine, that the intense debate that happened this summer around fast track trade authority will only be a precursor to a major fight in the U.S. Congress around the TPP.

NA: What’s next in the U.S. Congress passed the Trade Promotion Authority, or TPA, giving the president fast track authority to approve the measure, how much of an opportunity will the public have to evaluate the terms of the agreement and communicate with their legislators?

MS: Under fast track trade authority, as you mentioned, unfortunately Congress did tie its hands. This agreement would be brought before the U.S. Congress without the opportunity for them to amend it and with very little opportunity for debate. But Congress will still need to vote to approve it in both houses. As was laid out in the legislation, there needs to be at least 90 days between when the President notifies Congress and when the President can sign the agreement. And then there would be an additional 30 days before it would come before Congress. So we’re looking a timeline in early 2016 at the earliest, there’s no way that this can come before Congress in 2015, which means that this will be right smack dab in the middle of the election season. Electoral politics with the primaries and the general election, both the presidential politics as well as the congressional elections. We expect that this very controversial deal will become a very toxic piece for many members of Congress who will not want to take a controversial vote on this in an election year, who have criticized the TPP, including Republican frontrunner Donald Trump, who has been very vociferous against the TPP. Bernie Sanders has put out a statement saying he will do everything he can to defeat it. Hillary Clinton has distance herself from the TPP in recent months because of the strong opposition in the Democratic party. We will continue to see that play out. So I think, what the timeline, if they do announce that they gave notification to Congress, we’ll be looking into 2016. Whether it’ll be early or late in 2016, I think, is still a question.