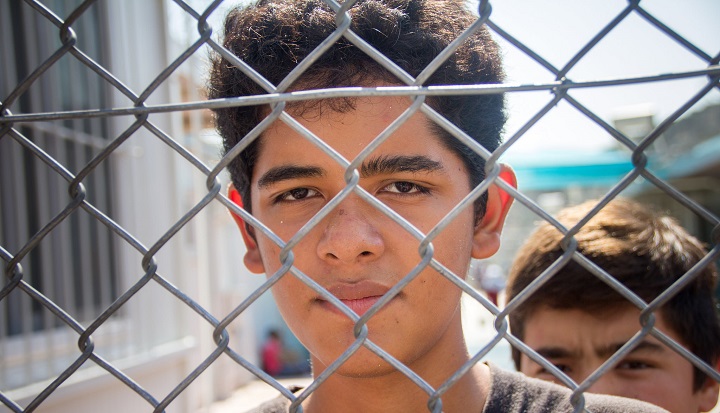 One of many Afghan youth who have fled the country unaccompanied, migrating overland through Iran and Turkey, eventually making their way to Greece. (Photo: Thomas Andre Syvertsen/ IFRC via Flickr Creative Commons)

Reaction to Tuesday’s terror attacks in Brussels continues, both in Belgium and beyond. The country observed a moment of silence Wednesday and began three days of mourning for the at least 31 confirmed deaths; 270 were injured and the death toll is expected to rise. All air travel in and out of Brussels is grounded until Saturday and the city’s Metro closed Wednesday evening.

Officials have identified three suicide bombers in the coordinated explosions at the Brussels Airport and the busy Maelbeek metro station: brothers Khalid and Ibrahim El Bakraoui and Najim Laachraoui. Authorities suspect the latter was a bomb maker in the November 2015 Paris attacks. Turkey’s President Reccip Tayip Erdogan says that Ankara deported one of the El Bakraoui brothers in June, sending the Belgian national to the Netherlands with a warning that he was a “foreign fighter.”

Turkey’s deal with the EU to take back all migrants who cross through the country and arrive in Greece took effect Sunday. The agreement calls for EU countries to then accept an equal number of Syrians from Turkey for resettlement. But Wednesday, Poland announced that in light of the Brussels attacks, they will no longer honor an earlier pledge to take in about 7,000 refugees.

Also Wednesday, Doctors Without Borders announced that it is following in the UNHCR’s footsteps and ceasing humanitarian aid services in so-called Greek hotspots, because under the new EU rules refugees are being arrested and forcibly detained. The medical aid agency’s chief in Greece, Marie Elisabeth Ingres, said the organization made the tough decision because if they continue to work there they would be “complicit in a system … both unfair and inhumane.” And as arrests increase, so do tensions in refugee encampments like the one in Idomeni where two people self-immolated Tuesday amid growing protests.

Yet the mass movement of people fleeing violence and poverty in any number of countries continues. FSRN’s Gabe Mathews is in Afghanistan, where he attended a funeral for seven members of a single family who died trying to cross the Aegean Sea, and members of another family who hope to soon send their son along the same perilous path.

It is a gloomy day in Kabul. Dozens of people gather to bury seven Afghans who drowned in the Aegean Sea while trying to make the dangerous crossing to Europe. The family is still hoping that the bodies of five other relatives also on board the same vessel will turn up – so far they are still missing in Turkish waters. According to Afghan custom, the mourners will neither speak of the dead before they are buried, nor the reason they were aboard the overcrowded vessel. But a few streets away, more time has passed for the mother of another would-be migrant.

Sharifa Omeri’s son, Rashid, was killed in Iran eight months ago, while traveling overland trying to reach Europe through Turkey. His body has yet to be returned, and Sharifa has not been able to lay him to rest. She says ever since she learned of his death, time does not pass and she can hardly control her tears.

“I wish I could see his dead body. It would help me to deal with the pain and grief. I wish I had never allowed him to leave the country,” Omeri sobs. “I wish I had stopped him by force. Now I hope I die soon too.”

Sharifa’s husband sold their property to pay for Rashid’s travel to Europe. Now they’ve lost both their ancestral land and their son.

The same day the mourners bury their loved ones, in the capital city of Kabul, hundreds of Afghans stand in line to get their electronic passports. One of them is Maazullah Khan. He says he is 19 years-old, but he looks barely 16 and has not yet begun to shave.

“My father sold his land to send me to Europe. There are no jobs here, only poverty. So I plan to go to Europe and earn money,” Khan explains. “I’m ready to work any type of work, labor or any other job, to earn money and support my family. I know it’s not easy to reach to Europe and I know about dangers during the trip.”

According to the Ministry of Refugees and Repatriations, more than 70,000 Afghans like Maazullah have left the country in last three months alone. Thousands more hope to leave as soon as they can come up with the money, certain they’ll find opportunity abroad and be able to send money back home. All told, government officials say 250,000 Afghans have already registered as refugees in developed countries.

A survey conducted jointly by the United Nations’ refugee agency and the Afghanistan Research and Evaluation Unit, or AREU, found poverty, insecurity and unemployment as the main driving forces causing Afghan youth to migrate. And the increasing presence of the self-proclaimed Islamic State, which brutally kills innocent civilians, has increased the number people trying desperately to leave the country.

As with both the Omeri and Khan families, parents often sell what little they have to finance the dangerous and uncertain trips. They encourage their children to migrate, hoping they’ll find safety and opportunity that they do not have at home.

Agents and human trafficking groups make it easy for young Afghans to take the risk. Depending on routes traveled and country of destination, they can cost anywhere from $5,000 to $12,000.

Ramin Jan, not his real name, is one such agent. He charges $12,000 to take people to England and says most of his clients are young people.

“We have a network of agents. We take people from western Afghanistan to Iran and then to Turkey,” he told FSRN. “Once there, we hand off our people to an agent who is responsible for the rest of the trip to European countries.”

Yet despite the hope that many feel as they depart, the realities are harsh. Dr. Sayed Mahdi Mosawi is a senior research officer with AREU. He has spent time in Iran and regularly visits Turkey, and says things are not necessarily better for Afghan youth who survive the journey and live as refugees in other countries.

“Parents should be informed about the hardships and risks their children will face during their journey,” Mosawi points out. “They’ll also be left with psychological problems and our media, TV and radio should disseminate these messages. Everyone should take it seriously, because this is not an individual issue, but a problem common to us all.”

But with little economic opportunity, many families see no options, and even educated young Afghans feel forced to join the mass exodus from the country.