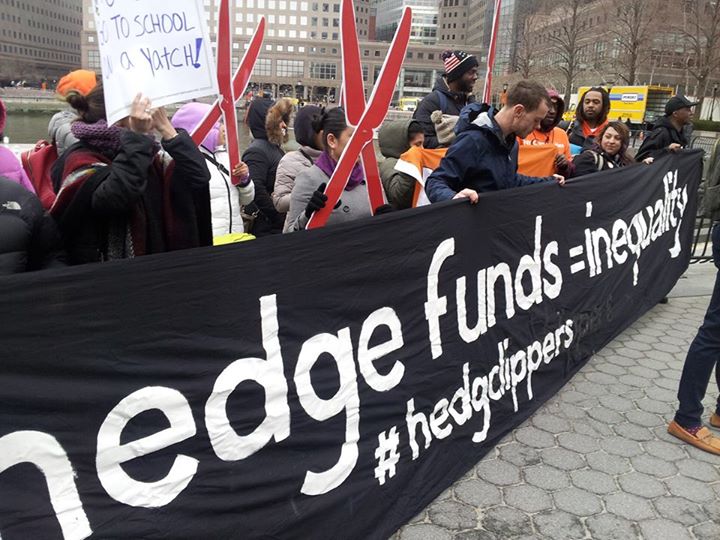 Many people in the United States had never heard of hedge funds before the housing market crash of 2008 and subsequent financial crisis. Hedge fund managers grew rich while thousands of people lost their homes to bank forfeitures. The meltdown triggered calls for investigations and prosecutions of those responsible, while the federal government bailed out the so-called “too big to fail” financial institutions involved. The impunity for the actions which caused the crisis – and escalating income inequality – spawned the nationwide “Occupy” movement in 2011, with the flagship encampment in the Wall Street financial district’s Zuccotti Park. Now, some New York activists are taking a different approach. Linda Perry Barr reports from New York City.

Shame the rich and powerful. Protest on their doorsteps. Publicize their behavior in front of their neighbors.

It’s a tactic known as “escrache” – first used by survivors of Argentina’s dirty war against unpunished former officials of the military dictatorship. Spaniards later adapted it to call attention to those who profited from the housing market collapse there. But now, a group called the Hedge Clippers is bringing it to doorsteps of New York City’s hedge fund managers.

“I guess you can kind of consider everything we do as part of Occupy Wall Street,” says Hedge Clipper Nick McMurray. But instead of camping out in a park, these activists go to where hedge billionaires live, work and play.

“Our first protest we went to Greenwich, Connecticut where a lot of hedge fund managers live, a lot of them fly into NYC to make their money and then go back to Greenwich to bask in it,” Charles Khan told FSRN. He’s a Hedge Clipper with Strong Economy For All, a coalition of labor and community activists. Khan says the group has a research arm called the Hedge Papers, to make information about politically-influential billionaires more accessible to the public. “It’s very intriguing to see that there are so many ways where money can seep into our system and it could really really have a negative impact on policies that the majority of people want.”

This week Hedge Clippers went to The Plaza hotel where hedge fund manager Paul Singer was giving a presentation on shorting stocks. Hedge Clippers say Singer exploits poor countries in crisis via so-called “vulture funds” by purchasing sovereign debt at a deep discount, then swooping in to collect at full price when nations approach solvency.

There are other issues singled out by the Hedge Clippers that are closer to home for many New Yorkers.

“They’re trying to use that millions of dollars to force policy in the state of New York,” says Teachout, continuing “really trying to buy the policy and it looks pretty explicit when they spend the money how they spend the money  it’s on a combination of donations to campaigns, individual candidates, a lot of money to Andrew Cuomo, but then also independent spending, funding think tanks. It’s a real deliberate effort to have a takeover.”

Hedge Clippers recently protested at the condo of billionaire Dan Loeb on Central Park West. He’s a hedge fund manager who sits on the board of Success Academy Charter Schools which receives free rent in buildings which also house public schools.

“I think that they should pay their own way,” says Nilsa Toledo. She has two children in a public school in Flatbush, Brooklyn. “They shouldn’t co-locate in public schools. It happened to my son’s school and the quality is so different. In the charter side they have flat screen TVs. Every kid has a laptop and meanwhile I’m paying for that, but in my son’s school, they are lacking. Their textbooks are still from like 1998. lt’s really disgusting.”

While hedge fund billionaires pushed hard for more charter schools in the New York State budget, pressure from teachers and parents prevented the removal of the current cap.

But multi-million dollar spending on political campaigns did seem to pay off.

A recent report from the Institute on Taxation and Economic Policy indicates hedge fund managers and billionaires in the richest one percent pay a smaller share of their income in combined state and local taxes than do lower and middle-income families.

That means the service employees of the wealthiest New Yorkers pay a greater share of their income in taxes than their billionaire bosses.

While lawmakers refuse to use the legislative tools at their disposal to reverse the trend of skyrocketing income inequality, escrache-style protests by the Hedge Clippers will likely continue.