African-American students protest institutionalized racism at universities across the U.S. 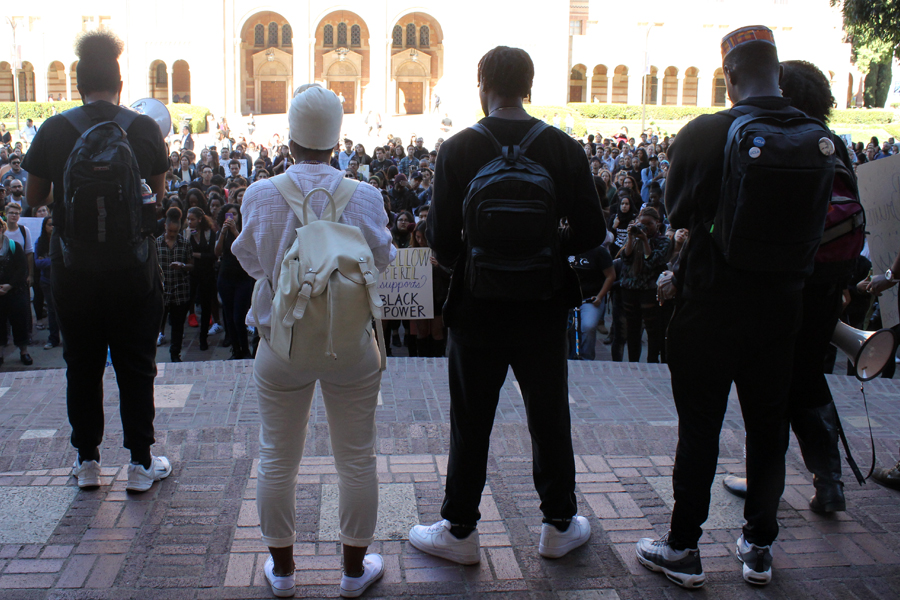 While colored-only bathroom signs are relics and being black no longer means that you have to sit at the back of the bus, African-American students at colleges throughout the U.S. say that in 2015 they are still dealing with more subtle forms of institutionalized racism.

The University of Missouri has been at the center of protests calling for administrators to be more responsive when it comes to dealing with racial hostility on campus. Friction between students and the president of the university led to his resignation last week. FSRN’s Lena Nozizwe reports that students around the country are also putting their administrators on notice, while critics don’t understand why.

While detractors wonder why African-American students at the University of Missouri have been protesting, other students from around the country say they completely understand.

So far, students and faculty at some 100 colleges and universities in the United States have expressed support for those at the university also known as Mizzou. That support means that Missouri is not the only institution of higher learning where African-American students say they constantly face racial hostilities. And they say many school administrators are ineffectual when it comes to responding to their complaints.

That includes the University of California, Los Angeles, where hundreds of students of all races protested last week on the steps of the Powell Library.

Echoing other universities, the UCLA students have also presented a list of demands to the administration, including increased funding for student programs, including an endowment just for African-Americans. Students also want more black faculty members.

Peter Hudson, associate professor of African-American Studies at UCLA,  supported the protesters, saying, “As faculty we are subject to the same forms microaggressions, to use the word, the same forms of humiliations that you are subjected to as students. And we get them from students, from faculty members and from the administration as well.”

According to the U.S. Department of Education, UCLA and Mizzou aren’t outliers. In 2013, the number of black students at four-year research universities was substantially lower than their demographic population size in 49 out of 50 states, with West Virginia the only exception. At top-tier private universities, the disparity was even greater.

Sue Cochran was in the crowd at the UCLA protest. She’s the vice chair of the  Academic Senate, and says the campus has been trying to recruit more minority faculty members.

“The students have a lot of issues that they are working with the administration on in terms of being sure that opportunities here are fair for everybody and that there are things we can be doing to make this place more welcoming for folks,” Cochran explains.

Students at the University of Missouri have said they feel unwelcome after years of incidents, including when two white students placed cotton balls around the Black Culture Center—an allusion to slavery.  And earlier this year someone painted over the word black at the culture center.

When Mizzou students recently questioned the then president about the fairness of the institution, things only got worse.

“What do you think systematic oppression is?”

“Systematic is because you don’t believe that you have an equal opportunity for success,” Wolfe said.

“Did you just blame us for systematic oppression, Tim Wolfe?” a student yelled back.

Last week Tim Wolfe resigned under pressure. The chancellor of the university also stepped down.

And in Los Angeles just last month,  students staged another protest at UCLA. They demanded more support for black students after a sorority and fraternity theme-party that was offensive to many black students on campus.

First-year political science student Tiffany Darden says following the party, she noticed that racial tensions increased. While critics say students like Tiffany are just being too sensitive, she says just walking around campus can be a study in microaggressions.

“Specifically on frat row I think on college night when there are parties and stuff,” recounts Darden. “My friend and I were walking, we are both African-American, and a guy was like ‘Yeah I love chocolate,’ giving us a high five so things like that.” And recently over the weekend the guy did the phrase, ‘Oh, like the darker the berry.’”

Students here, and around the country, have clearly been influenced by the Black Lives Matter movement. The familiar chant rang out at UCLA during the protest in support of Mizzou. Critics who refer to Black Lives Matter protesters as thugs now call student activists whiners.

“I have had people use the n-word with me just openly. Obviously I am a tall African-American male at a major institution, so I have had a lot of questions regarding  ‘Are you here on a sports scholarship? Like do you play basketball or do you football?’ I don’t fit into any of those categories,” says Lampley. “So I have dealt with a lot of people kind of questioning my intellect just based on the fact that I am a minority student.”

A study released earlier this year by the Federal Bank of St. Louis found that the median net worth of college-educated blacks dropped by nearly 56 percent from 1992 to 2013 while their white counterparts saw an increase of 86 percent, in spite of the Great Recession.

Lampley understands what he faces after graduation, but like other college students around the country, he isn’t willing to simply accept it. That, he says, is why he protests.