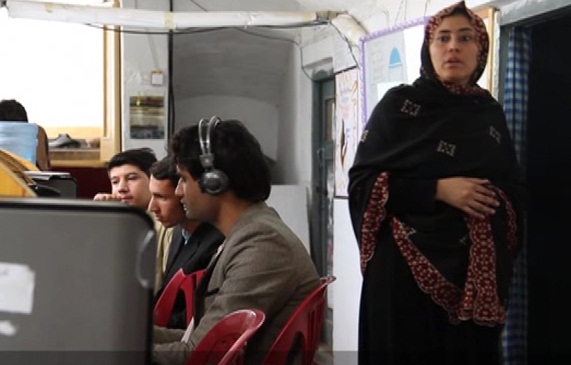 In recent meetings with Afghan officials, the Taliban has tried to put forward a moderate face, agreeing to talks that included Afghan women and female civil activists. But during their recent takeover of Kunduz Province, brutal attacks specifically targeting women were all too evident, belying very different intentions and policies. Soon after the militants captured Kunduz, the Taliban threatened organizations headed by women and three female-led radio stations were destroyed. Last week, in Ghor province, a young woman was stoned to death – the killing captured on video went viral.

Gabe Matthews recently traveled through Kandahar where he learned more about the challenges, and violence, against women working for change in the southern province.

Maryam Durani arrives at her office in southern Kandahar province wearing a burqa, completely covering not only her face but her entire body. She says she dons the covering as part of her cultural identity, and not for security reasons.

Durani runs a free internet café for Afghan girls. It’s the first of its kind. She is the director of the Khadija Kubra Women’s Association for Culture, an organization that seeks to empower women living in the region. She’s also a member of the provincial council, and she founded Khandahar’s Mairman radio, a station that focuses on women’s issues.

“It is very difficult to gather men and women at the same place at the same time for any activity or discussion in Kandahar. So I started a radio station here that can be across the region,” Durani explains. “We can share our ideas and messages with more people in Kandahar through radio than we could with trainings and workshops.”

An announcement broadcast on the station promotes an upcoming public affairs show that will look at a local women’s rights initiative. Durani hopes to expand the broadcast service to other provinces as well. But, in countries like Afghanistan and Pakistan, being a voice of the voiceless is a dangerous undertaking.

Eisa Durani is Maryam’s father. He completely supports his only daughter. Despite the threats and struggle, her father encourages her to expand her work, and counter the rising tide of attacks and violence used by militants to silence women’s voices in the country.

“I have lots of expectations of her. She should work even more than what she already does,” says Eisa Durani. ” She should serve her country and the women here.

Last month, Durani was awarded the Nobel Peace Prize for her work for peace building and transforming their communities. A well known women’s rights advocate, Durani has received the International Women of Courage award in 2012 and the Netherlands Freedom of Speech and Expression award. She was also named one of the 100 most influential people in the world by Time Magazine.

But she’s just one among many women from all walks of life working on the front lines, fighting for and defending their rights. Many have been killed, while others have fled the country for security reasons.

The threats and challenges come from multiple places including, but not limited to, powerful community members and armed militants.

“Besides other issues, women face problems from their own family members at the first step,” says journalist Hamida Muhammidi. She has received several threats over the course of her four years as a radio newswoman. Last month, an explosion destroyed her office. She says the challenges for women often begin at home.

“Our parents and relatives have different opinions about women who have jobs, especially about those who work in media,” explains Muhammidi. “Their attitudes have stopped many women from leaving their homes to seek jobs in the media or any other place. People here look down on working women, especially female journalists.”

Sabrina Hamidi, is the head of the eastern zone of Afghanistan’s Independent Human Rights Commission.

Late last month a bomb detonated in a vehicle park outside Hamidi’s office; two people were killed, six others injured.

“Honestly, I wasn’t worried at all after the incident. I grew up in a situation in which these incidents are normal. Two of my colleagues were killed and six others were wounded,” recalls Hamidi. “It was a painful moment in my life, but I stood strong and firm and came to the office on the next day. We are ready to stand firm in the face of these attacks all the time.”

And attacks against women continue. The recent Taliban offensive in Kunduz was a brutal and threatening reminder that Afghan women face deadly repression across the country. Many fear what gains women in the country have made over the past decade are under renewed threat.

But many Afghan women deny such claims, saying they emerge stronger after each attack.