Despite ban on rallies, thousands demonstrate in Paris ahead of global climate change forum 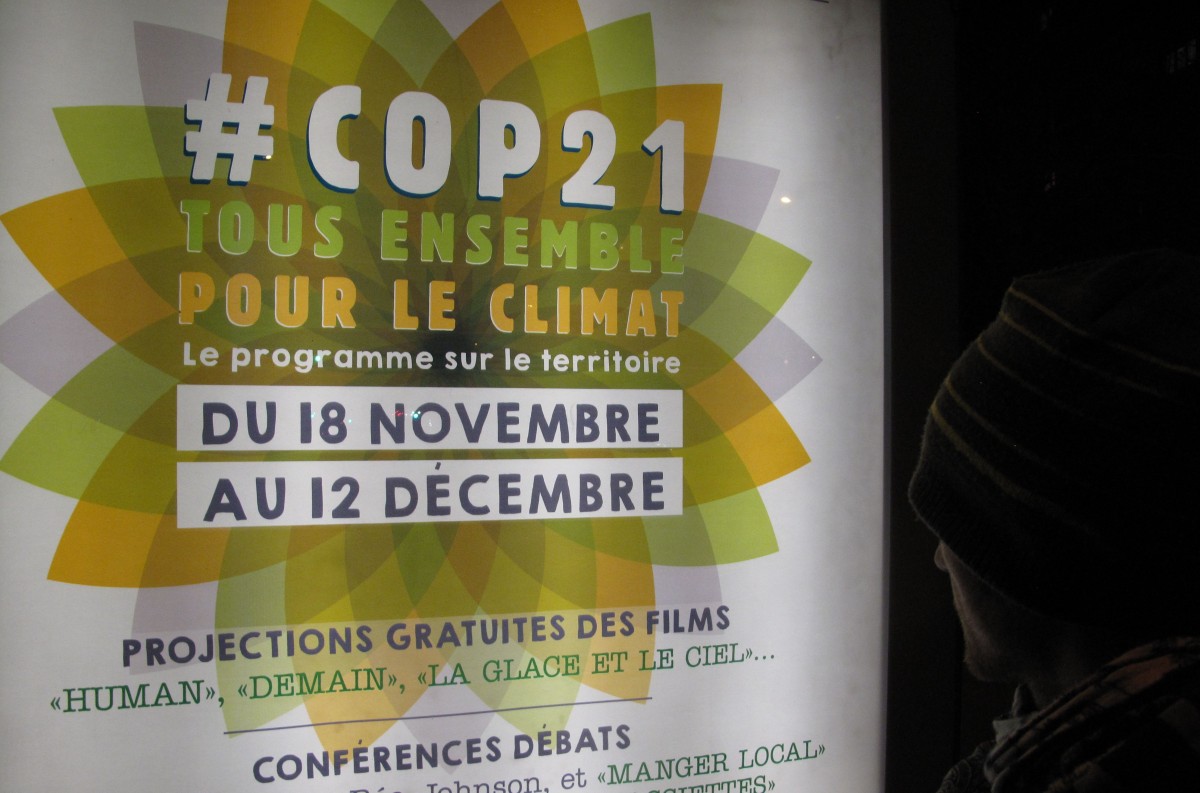 Joel Domenjoud is one of at least 24 climate activists placed under house arrest by the French government for the duration of the two-week United Nations climate change conference in Paris. (Photo credit: Jacob Resneck)

About 40,000 political leaders, scientists, advocates, lobbyists and journalists have descended on the French capital for a last-ditch effort to craft a global response to climate change. The COP-21, short-hand for the long-winded Conference of the Parties to the United Nations Framework Convention on Climate Change, is the 21st meeting and last chance to hammer an agreement in a process that began in Rio in 1992. Previous efforts to agree to a plan, the most recent in Copenhagen four years ago, failed spectacularly though all sides have agreed there is more political will than ever before.

President Obama was among a string of world leaders who addressed the gathering on opening day, saying that climate change could define the contours of this century more than any other issue.  Obama also acknowledged that the U.S. is the second biggest global emitter of greenhouse gases and said “America not only acknowledges its role in climate change but embraces doing something about it.” The president of Kiribati, also addressed the convention – thanking Fiji for offering to provide a home to the Kiribate people “in the event that climate change renders [the island] uninhabitable.”

But the deadly Paris attacks earlier this month has cast a pall over the host nation which is under a state of emergency, frustrating efforts by activists who have been swept up in anti-terror raids in the run-up to the two-week summit.  FSRN’s Jacob Resneck reports.

Thousands of people formed a two-mile human chain in Paris Sunday, despite a ban on political rallies in the run-up to the global climate change forum. Authorities argued that security fears were too great to allow marches and rallies. France has been under a state of emergency since the November 13th attacks claimed by the self-styled Islamic State that left 130 dead.

But in an 11th hour compromise, activists managed to demonstrate by staying mostly on the sidewalks. Heavily armed police stood by as people held hands, waved banners and shouted slogans. The message was loud and clear: the crowd called for decisive action against climate change by curbing the use of fossil fuels.

But world leaders have already said that the pledges made won’t be enough to keep global temperatures within 3.6 degrees Fahrenheit above pre-industrial levels – the target many scientists agree is the threshold for preventing cataclysmic climate changes that bring rising sea levels, drought and severe weather. And even if pledges were sufficient, negotiators haven’t agreed whether any agreement would be legally binding.

That has many people here concerned.

Tom Goldtooth, a member of the Dakota and Navajo tribes, is director of the Indigenous Environmental Network that’s been at the negotiating table. He says they’ve been consistently sidelined by powerful interest groups, especially the oil and gas industry.

“We have a delegation in the inside as well as the outside,” he told FSRN. “But we’re saying enough is enough – we’re drawing the line in the concrete in the streets here in Paris because we see too much of the blood oil in our backyards that has taken the life of not hundreds but thousands of our people back in these different areas like the tar sands, the cancer clusters that are there.”

As the human chain broke up and people began to disperse, smaller groups marched on Republic Square. They were met by riot police who fired volleys of tear gas before sealing the square and detaining hundreds of demonstrators.

Foreign Minister Laurent Fabius has defended France’s ban on public demonstrations. Speaking to reporters, he responded to critics who question why rallies and marches are banned whereas spectator sports, Christmas markets and other crowded events that would theoretically be vulnerable to attack are permitted.

“If they are in fact in a closed environment of course we can guarantee a certain amount of safety and security but if you’ve got thousands of people walking or marching of course there are risks that we might not be able to manage quite in the same way and in the right way,” Fabius said Saturday. “This is why the French government has decided to ban marches and most of the associations and organizations have been very responsible in their reactions to this decision.”

The French government’s actions go further than just banning protests. The country remains under a three-month state of emergency – invoked from a law dating back to the bloody Algerian War that broke out in the 1950s.

“Very concretely (the law) allows the police and security services to do searches, to place people under house arrest without any control of a judge,” said Clemence Bectarte, an attorney with the Paris-based International Federation for Human Rights.

She said that the emergency powers granted to police are very vague in defining what is a threat to public order.

“So people do not even have the means to know concretely why, on a given night, 50 police officers coming to their house and doing these searches in presence of children and women, etc,” she told FSRN.

That’s exactly what happened last week to Joel Domenjoud, a green activist who had been part of the coalition of groups petitioning to organize marches in the city. Armed police stormed into his apartment and delivered an order placing him under house arrest last Thursday.

In summary, the order confines him to his neighborhood. The only exception is when he registers three times a day at a nearby police station.

The 31-year-old former school administrator says he’s never been convicted of a violent crime but was a vocal activist who appeared in front of police authorities to argue the case for legal marches during the climate summit.

He says officials countered that the threat of terrorist attacks made it impossible for police to allow open air marches and rallies.

“So what I was answering was how long will it be? Three months? Three years? I don’t need some other people to secure my life,” Domenjoud told FSRN. “I can assume the responsibility myself even if there are some risks.”

Even if polls suggest the French public is largely satisfied with the government response, civil liberties groups are worried. And Domenjoud isn’t alone. He’s one of at least 24 environmental activists placed under house arrest for the duration of the climate conference. Police don’t need proof of wrongdoing and he has no legal recourse.

France is still reeling from the psychological effects from the attacks and that’s emboldened the government, Bectarte says.

“I think there is a sort of paralysis now,” she said. “People are under shock still, under the shock and the emotion of the attacks. Now everything is under security and emotion. We are at war, a ‘war against terror’ and security is becoming the first issue on the agenda.”

Still the government wants to go further. The center-left government of President Francois Hollande has suggested a constitutional amendment that would make the presidency’s extraordinary executive powers permanent, though full details haven’t been released.

“There have been a lot of proposals each one more frightening than the other one, I would say,” Bectarte said. “And of course this constitutional amendment would allow the government to pass more easily laws on the state of emergency if any attacks happen again.”

Activists vow to continue street actions during the two-week climate summit. With nearly 150 world leaders arriving, including President Obama, it seems inconceivable that public demonstrations could be completely banned.

As he’s under curfew, activist Joel Domenjoud will watch this unfold from the comfort of his own home. But he says he expects people will remain defiant and carry messages that real action is needed to tackle climate change.

“We have to take back the streets because much of the streets are now commercial places and we have to say protests are the expression of what the people are thinking and it’s important to show it,” Domenjoud said.