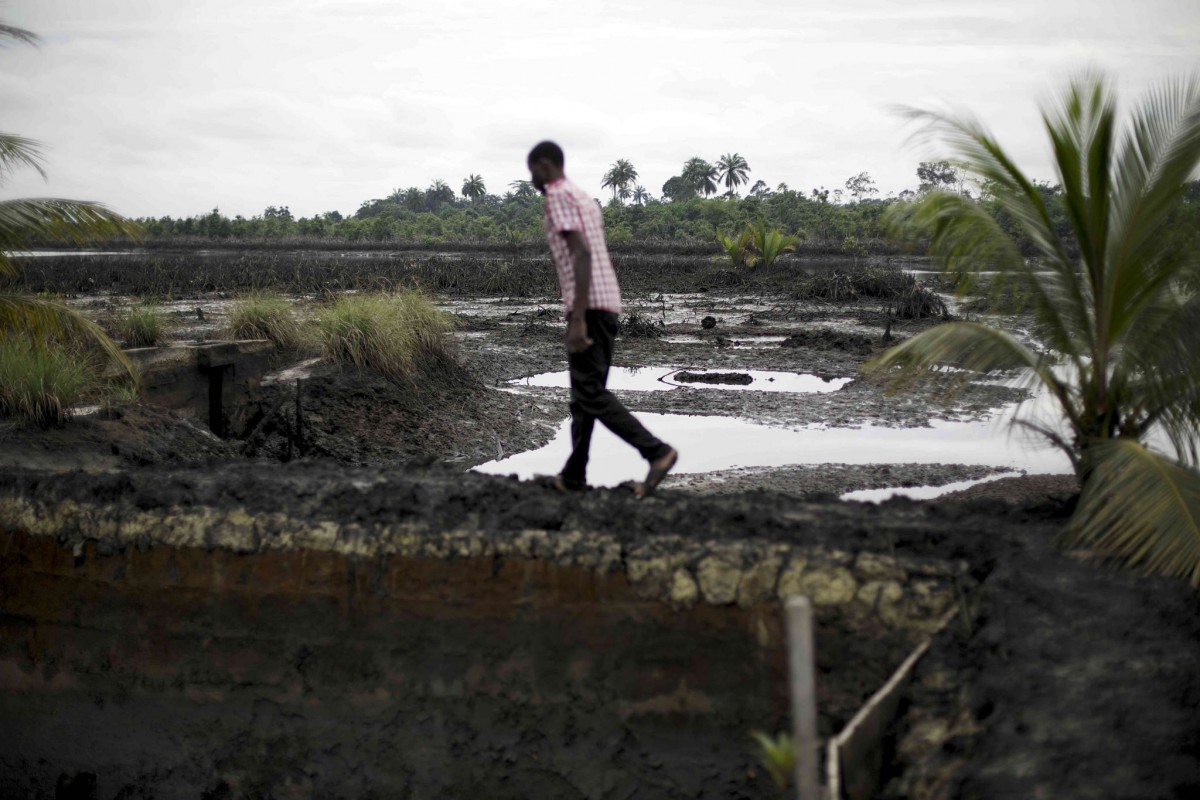 It’s been 20 years since the then military-led government of Nigeria executed playwright and minority rights activist, Ken Saro-Wiwa with eight others. The men – all environmental campaigners opposed to the activities of the multinational oil company Shell in indigenous Ogoni territory – were hanged after a trial that drew international criticism. Sam Olukoya examines what has happened in the Ogoni lands 20 years later.

The Ogoni sing a popular song composed in honor of Ken Saro-Wiwa and the eight other environmental campaigners executed with him. A military tribunal convicted the men of murder in what was regarded worldwide as a sham trial. Their real crime was organized, nonviolent opposition to the activities of the Anglo-Dutch oil company Shell and the military-led government.

The Ogonis regard Saro-Wiwa as their Nelson Mandela. He led the Movement for the Survival of the Ogoni People, MOSOP, which drew attention to the environmental effects of gas flares and oil pollution affecting rivers and farmlands in the Niger Delta region.

“The huge toll of a polluted environment is taking its bite on the people because people are dying, life had become so short. You will see burial posters you will think it is an election,” says Akpobari. “Poverty, hunger have taken their seat in Ogoni. The only thing that is alive is the resilience of the people to fight on.”

The Saro-Wiwa led struggle forced the Nigerian government to allow the United Nations Environment Program to carry out an assessment of the environment in Ogoniland. The UN body found that oil extraction and related activities have caused grave environmental harm. Drinking water wells were contaminated by cancer causing agents at over 900 times above limits set by the World Health Organization.

The Ogoni people feel the impacts of pollution in other ways.

Barale is a little village in the heart of Ogoniland, accessible only by a narrow dirt road. Most people here are subsistence farmers.

Community member John Aseme says local residents are still coping with the after-effects of an oil spill which flowed into the village years ago.

“The oil enter inside my house and all our clothes, everything was damaged by the spillage,” Aseme explains. “And I was pack out from my house because there was oil inside my house. Up till now we are suffering, all my property, all my house is damaged.”

The portion of the community farmland where the oil pipeline ruptured and sparked a fire remains a wasteland. Throughout Ogoniland, oil pollution has profoundly affected the traditional occupations of farming and fishing.

But when Ogoni leaders like Saro-Wiwa took their grievances to the military-led government, the official response was to deploy soldiers to the region to violently put down their agitation.

The Ogoni anthem, composed in the heat of their struggle against Shell, calls on Ogonis to resist oppression and exploitation.

MOSOP member Comfort Tombari says the people cannot afford to fail the executed men who sacrificed their lives for the struggle: “They laid down their lives, so they have paid the price for us to live. They paid the price so we that have been left behind must continue this struggle. This struggle must continue, this is my land, there is no where I will run to and stay leaving my own land for another person to take over, no. I am ready to die for this struggle.”

Twenty years after the executions drew worldwide attention to the Ogoni struggle, the community continues to pressure the Nigerian government to clean up the lingering pollution in line with recommendations of the UNEP report.

Shell no longer drills in Ogoniland, but pipelines do run through the territory and spills continue to occur.

The government vows it will soon begin the first phase of the cleanup at a cost of about a billion dollars.