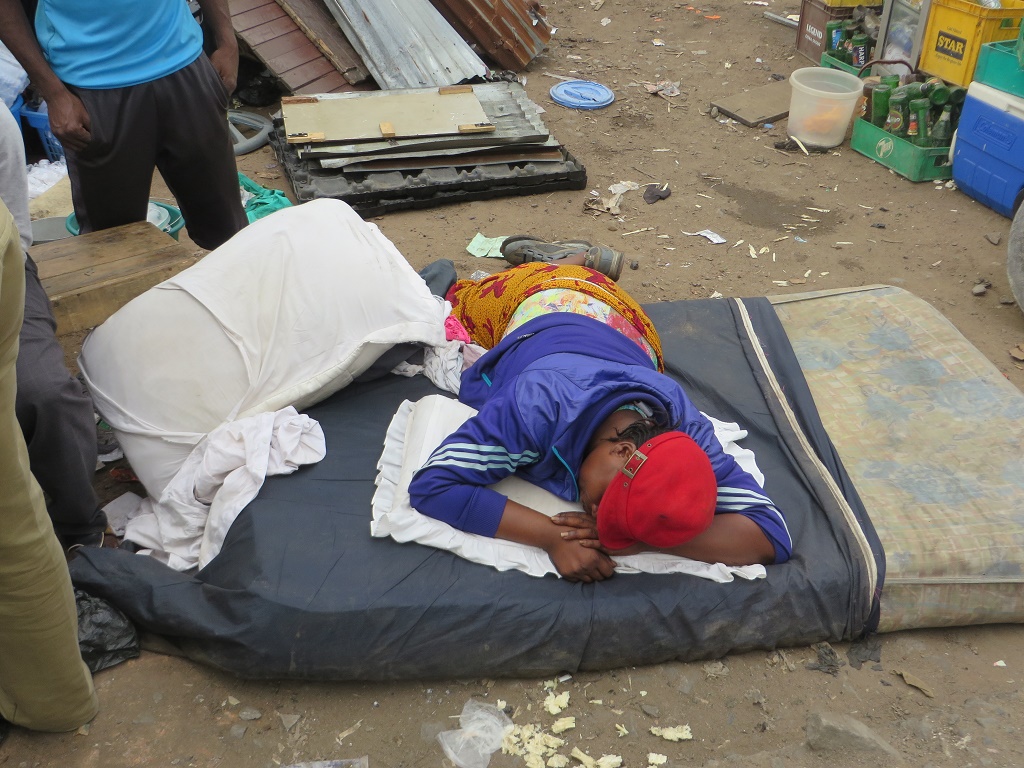 A women sleeps outside after she was evicted from her home and the structure demolished in Lagos' informal settlement, Badia East. (Photo Credit: Sam Olukoya)

For more than a month, hundreds of people have been sleeping in the open after they were forcefully evicted from their homes in an impoverished neighborhood in Lagos, Nigeria. Such evictions are common in Lagos where the population is growing exponentially and pressure for land in the city is high. With nowhere else to go, many of the now homeless former residents remain in the area, sleeping near the flattened ruins of what was their community just weeks ago. A thirty-day pause is set to expire and any day now the bulldozers may roll again. Sam Olukoya reports from Lagos.

Badia East is one of the largest informal settlements in Lagos, Nigeria’s commercial capital. With no notification, police forced the residents out of their houses and bulldozers began to demolish the rough structures that were home to nearly 15,000 people.

Some found shelter in similar neighborhoods elsewhere in the city. But one month later, hundreds of the displaced people are still sleeping in the open near the ruins of their now demolished homes, including nursing mother Iyabo Benson.

“The eviction seriously affected me,” Benson explains. “My baby was less than a month old when my house was demolished. I have been sleeping outside with the baby and my other children ever since. The baby is down with several health problems. You know, as a baby she should not be exposed to the weather.”

Informal settlements like Badia East are common in the severely overcrowded Lagos. Many of the poor in this city of more than 20 million people live in tightly-packed areas filled with hastily built shacks. Within these so-called slums, residents establish houses of worship, small businesses and communal sanitation centers.

Many of the people who lost their homes in Badia East say they were evicted without any compensation for their losses. With no where else to go, they are left to live outside — exposed to heavy rains and severe heat from the sun.

Many like widow Kemi Ogunyemi were unable to salvage any of their belongings when their homes or small shops were destroyed.

“I sell food. That is the job I do to feed my four children,” says Ogunyemi. “I went to buy meat, before I came back, they had demolished the house. They didn’t even let me get clothing out for my children to wear.”

Ogunyemi’s plight reflects the situation for many. They not only lost their shelter, they also lost their source of livelihood.

Ola Igbayelo, chief of the Badia East slum, says the land belongs to his people because more than 40 years ago the Nigerian government relocated them there when it acquired their land to build the national arts theater.

“We are from national theater, we leave there 1973,” Igbayelo recalls. “They tell us that they want to use that place so we should come here. Federal government direct us here, so we are here.”

Demolitions are not new: they mainly take place in slums where the government, corporate organizations or rich families forcibly take land from the poor without any compensation.

In Badia East, its no different. Ownership of the land has been the subject of dispute for years. In 2014, a court ruled that the land on which the informal settlement sits belongs to a rich Lagos family. Human rights and housing advocates question the legal process that led to the court ordered evictions, saying the people residing in the community were not party to the case.

Megan Chapman of the Lagos-based Justice and Empowerment Initiative — a group fighting for the rights of marginalized communities — says the evictions constitute a violation of the residents constitutional rights and an infringement of their right to shelter. “Why should they lose their livelihood if they where doing business? Why should they lose their shelter, if they were living there because someone is coming and saying that they are the owner of the land when they had been living there for so many decades?” she asks. “Before that time and no one ever came and carried them to court saying this is their land so they could have defended themselves.”

Protests continue as the community fights further demolitions. The demonstrations forced the government to call for a 30-day suspension. But the demolitions may soon resume in both Badia East and a handful of adjoining slums – home to a total population of thirty thousand people.