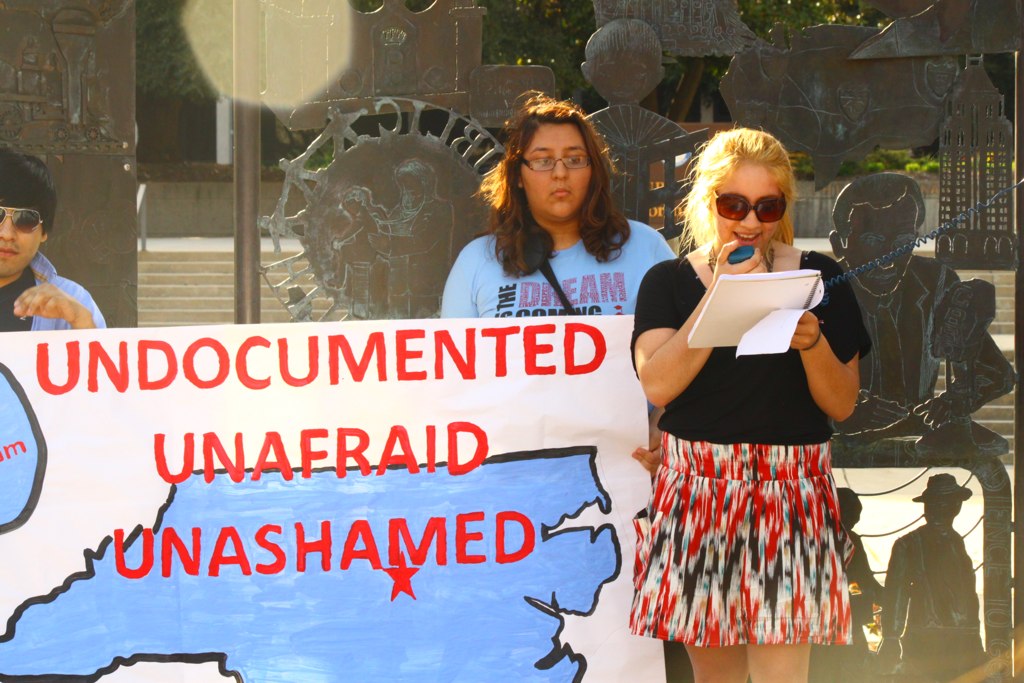 Supporters of the law say it’s an effort to prohibit undocumented workers from taking jobs from legal residents. Detractors say it’s unnecessarily harsh and that it may have some unintended negative consequences for law enforcement.

And they worry that other states, like Texas where the governor has been pushing for a similar bill, will soon follow suit.

But the law has other provisions that detractors say are punitive against immigrants and the poor. It prohibits the state from applying for extensions to the Supplemental Nutrition Assistance Program (SNAP), formerly known as “food stamps.”

And the law says state government officials can no longer accept identification cards issued by foreign consulates or North Carolina communities as valid. An amendment allows police to consider community identification cards to help confirm a person’s identity if no other ID is available. But many immigrants don’t know that.

Jessica Contreras is a community organizer for immigrants in Charlotte.

“People are afraid that if they get stopped and they don’t have their passport and the only thing they have is their consular ID that it won’t be accepted and they’re worried that they’re going to be put in jail and if they are, how are their families going to know what’s going to happen,” Contreras explains. “And, I think there’s a lot of fear, if the police are going to be able to act as ICE, and we’re trying to get that information out to the community.”

Here in Charlotte, the police created an immigrant task force two years ago with the goal of engaging and integrating immigrant communities and building trust with local police. Now police are concerned that confusion around the new law’s ID provision could undermine those efforts.

Diego Anselmo is a Major with the Charlotte-Mecklenburg Police Department.

“If you’re a victim or witness of a crime, and things of that nature, we want to work with those individuals, regardless of what…you know, we don’t ask those questions of residency and immigration status because, if you’re a victim or a witness of a crime, you’re providing us information, we need that information, we don’t need them to be fearful of the police,” says Anselmo.

Many North Carolina cities have community ID cards that not only help identify an individual to law enforcement, but also allow them to cash checks  and use libraries, utilities and social services. While it’s unclear how the ID provision will be enforced, the law does state that community IDs in many cases are not valid for official uses.

Faith Action International House in Greensboro has partnered with the city’s police department to issue more than 2,000 ID cards to people from more than 30 different countries.

“Throughout history one of the best ways to dehumanize other human beings and not make them feel a part of the community is to take away access to basic needs like food, housing, healthcare and to take away their ability to fully identify themselves,” says David Fraccaro, Executive Director of Faith Action. “And that’s a dangerous road to travel down, but there’s no doubt this bill has that intent.”

The bill’s author, Representative George Cleveland of coastal Onslow County, did not respond to requests for comment. But during a lively debate on the House floor in September, he essentially stated the bill’s intent is to make life uncomfortable for undocumented immigrants and to discourage so-called sanctuary cities.

“You can be kind and considerate as you want but eventually they will overrun you and you won’t have the life you have now,” says Cleveland. “We don’t need the mentality from the other parts of the world in our state, at least in our state so they will not assimilate.”

The irony, according to pro-immigrant activists, is that many immigrants are trying to integrate.

North Carolina has had one of the fastest growing immigrant populations for decades. The foreign-born population here has more than quintupled since 1990, according to the Migration Policy Institute. And the state now has an estimated 350,000 undocumented immigrants, mainly drawn to jobs in construction and poultry processing.

Opponents of the new law say they don’t want North Carolina to go down the same road as Arizona, which in 2010 passed S.B. 1070, which allows local law enforcement to verify anyone’s immigration status during any routine police stop, a task formerly reserved for federal agents. The U.S. Supreme court struck down much of that law, but not before Arizona lost hundreds of millions in revenue from conference cancellations, according to the Center for American progress.

North Carolina’s law doesn’t go as far as Arizona’s, but it is creating tension between the state legislature and local authorities in cities with more established immigrant communities, like Greensboro and Charlotte.

Jessica Contraras says while the law may make it uncomfortable for undocumented immigrants, it won’t make them leave.

“They’re like, ‘We had our whole lives here. Why are we just going to leave everything we had here?’” Contraras explains.

Contreras says anger over the law might even galvanize the undocumented immigrants to come out of the shadows to build alliances and push back against the measures in an organized way. And for the law’s supporters that would be the biggest unintended consequence.