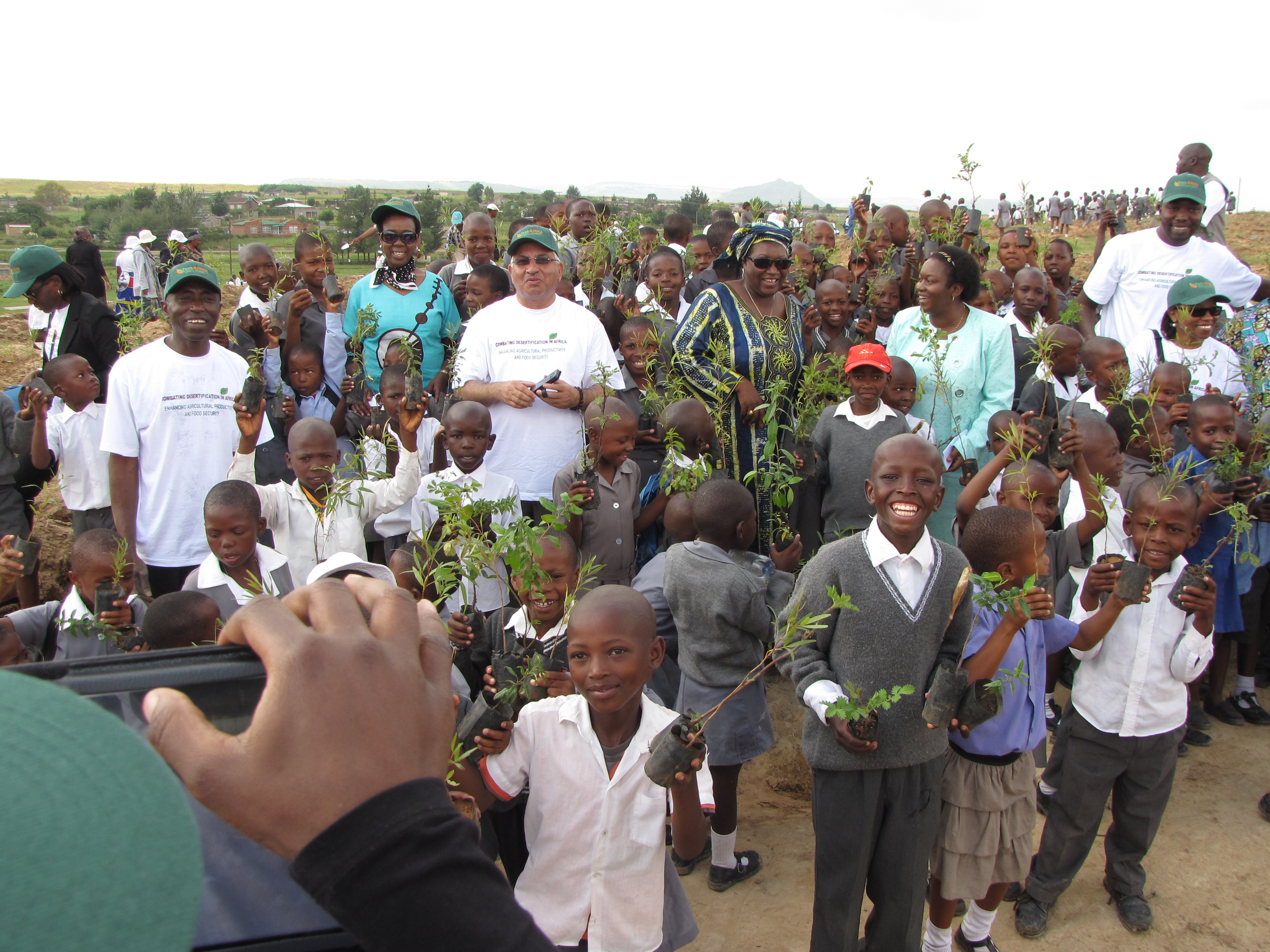 In the south African nation of Lesotho,  known as the “‘Mountain Kingdom,” desertification and land degradation threaten farmers’  livelihoods. Many have migrated to more productive lands, or are struggling to make a living elsewhere. But one man has decided to confront the problem head-on with a few work-intensive, yet technologically accessible solutions. Ngala Killian Chimtom reports.

School kids in the Lesotho capital, Maseru, sing during an event to celebrate Wangari Maathai Day, named after the Nobel Prize winning Kenyan environmentalist. Their song is reflective of the environmental challenges facing their country.

While Africa in general has been affected by desertification and land degradation, Lesotho in particular has been hard hit by this phenomenon. Rhoda Tunusiime is the African Union Commissioner for Environment and Rural Agriculture.

Land degradation in Lesotho has forced many farmers to migrate. Mathabang Rhakosi, a Maseru-based farmer, says she had to abandon her maize fields when the yield dwindled to near zero.

“I used to cultivate maize some twenty years ago, and at that time I would harvest up to 15 tons of maize a year. Then the yield started dwindling so that by 2004 I was not more able to harvest even half a ton.  So I turned to marshy areas to farm vegetables.”

But Selema Bokhabi, a farmer in North Eastern Lesotho will not be defeated by drought. The 65-year-old father of ten who once worked as a miner in South Africa is now seen in Lesotho as a champion of conservation. When all his animals died due to lack of food, Bokhabi had to look for other ways to make a living in the very extreme conditions.

To make his efforts sustainable, Bokhabi single-handedly constructed a small dam to harness water from the hills. Today, what was once barren land flourishes with luxuriant vegetation. Bokhabi says he is now able to support his family by selling edible tree leaves and bark to schools for their lunch programs. In doing this, he makes the equivalent of around 645 dollars a month.

The United Nations has held up Selema Bokhabi’s approach as a best practice. Wagaki Wischneski of the Public Policy and advocacy department of the United Nations Environment Program says such an initiative can result in several benefits, including the possibility of awards up to 100,000 dollars. Bokhabi hasn’t won such an award yet, but the possibility gives him hope.

Cecilia Jengi of the United Nations Environment Program says any solution to the problem of desertification and land degradation must start with a holistic approach to conservation.  “Recognising that Agriculture, water, land, forest, food production and consumption are well connected, the answer to providing food security while maintaining ecosystems lies in pursuing a holistic approach that incorporates climate-smart agriculture in the landscape approach,” she says. “A landscape approach means managing the land, water and forest resources necessary to meet the area’s food security needs and promoting an inclusive green growth as one integrated system.”

To mark the Africa Environment and Wangari Maathai Day in Maseru, hundreds of farmers embarked on a tree planting exercise in efforts to restore degraded lands. Mathabang Rhakosi, the farmer who had to abandon her maize fields, says she will attend to the tree she has planted the same way she cares for her husband.

“I will name this tree Joachim, because I am Anna. And in the Holy Bible, Anna was Joachim’s wife.”

As Rhakosi puts the tree to the ground, she raises her voice in prayer – asking that it may blossom and bloom, and help restore her degraded farmland.