New Yorkers push back against Islamophobia 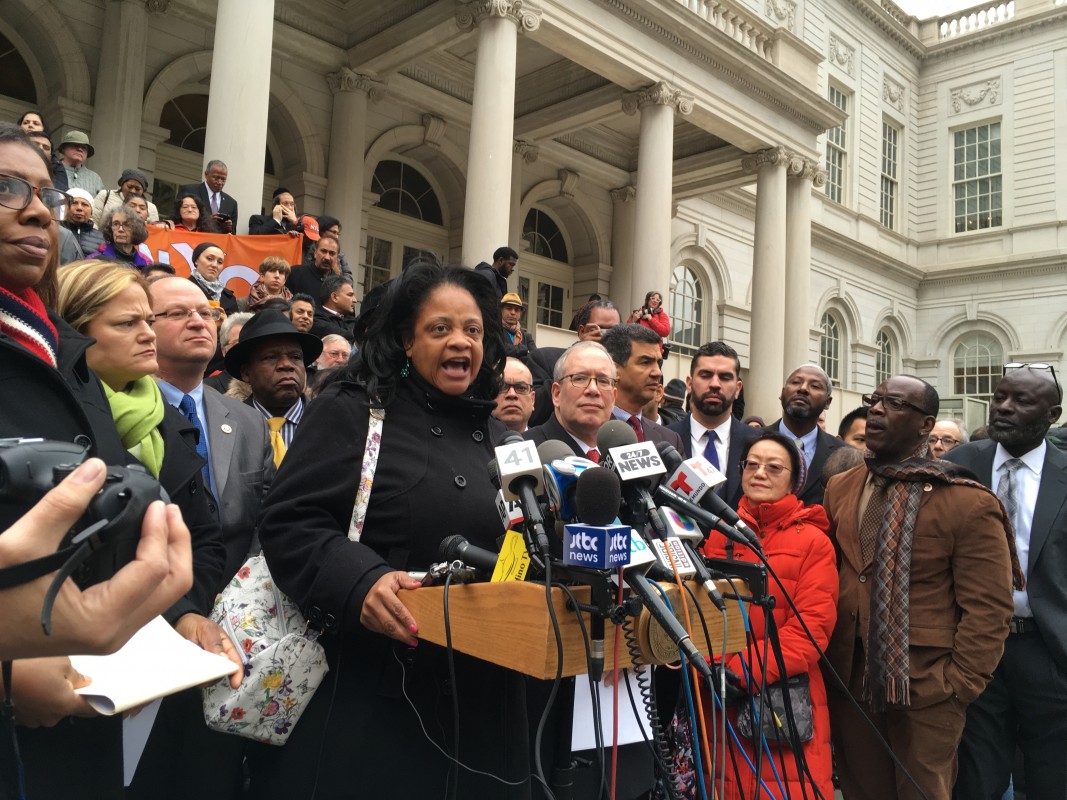 Comments made recently by Republican presidential front-runner Donald Trump calling for a ban on Muslims entering the United States have met varying degrees of condemnation from political figures, including from within the GOP. Some speculate that the candidate who has built his campaign on promoting what were once considered fringe or extremist positions has gone too far. Others warn the tenor of Trump’s discourse – and its apparently wide acceptance among a  broad swath of American voters – is a dangerous public flirtation with fascism. In the multicultural metropolis of New York City, public figures and local residents are pushing back. Linda Perry reports.

Anger has exploded on city streets over Donald Trump’s Islamophobic and racist comments.

“We are here in harmony and solidarity. This is the real New York,” says New York City Council Speaker Melissa Mark-Viverito as she stood on the steps of New York City Hall on Wednesday with other elected officials and activists at a rally speaking out against Trump and his proposal to ban Muslims from entering the United States. Mark-Viverito says rhetoric in this election cycle has gone from mean to hateful to dangerous.

“And we will not let Trump’s xenophobic rhetoric go unchecked and unchallenged,” she said. “There’s nothing left to say about Donald Trump, except that he is a disgusting, racist demagogue who has no business running for president. Period.”

Speaker after speaker stepped to the microphone to bash Trump. Some from Queens said they are embarrassed that he comes from that borough.

New York City Public Advocate Tish James says he built his wealth off the back of New Yorkers, and “if Donald Trump wants to come after our Muslim brothers, or anyone else, he will have to contend with all of us.”

It’s not just Donald Trump who is espousing racist hate speech, according to Imam Khalid Latif from the NYU Islamic Center.

“It was Ben Carson who said that he would never let a Muslim into his cabinet,” Imam Latif said. “Mark [Marco] Rubio who said he would be open to shutting down mosques; and Ted Cruz who said only refugees fleeing ISIS, who could prove they are Christian, should be taken into our country.” The Imam says these voices left unchecked have led to a rise in anti-Muslim sentiment arguably worse than after September 11th.

“It’s a frustration. Especially for the people, the ladies like me, wearing hijab,” Shahziac Berzai with human rights group Women for Afghan Women says, adding women in her community have been victims of racism. ““A lot of our ladies have been pointing out, ‘Go back to your country. You don’t belong here.’ Or they get a lot of, like, bad things [and] attention to them. Point their fingers at them, ‘Go back to your countries,’ and I want them to be safe. Including me. I don’t feel safe when I go out, my kids go to Islamic school, and I want everyone to be safe. And this country has been made by immigrants. And we shouldn’t forget that.”

Linda Sarsour is with Arab American Association of New York: “Our children, in the American Muslim community, don’t live in caves. They’re on social media, they watch television, and our kids are confused. They are taught to be proud of who they are, they are taught that they believe in a God that loves all people, of all backgrounds, and they question themselves, and they’re scared, and especially for our young women in our community who cover their hair. Girls wearing hats now, you know, telling each other not to stand too close to the train platform until the train gets there to get on.

“I mean, people are learning self defense, worrying about being attacked on the streets of their own city, where they were born and raised,” Sarsour continues. “It’s actually a very scary time that anyone who’s an American of whatever background has to actually think that way.”

Religious leaders and elected officials say what’s important is for New Yorkers to speak up and denounce the hatred being presented, and that New York City is a city of inclusion which respects differences.