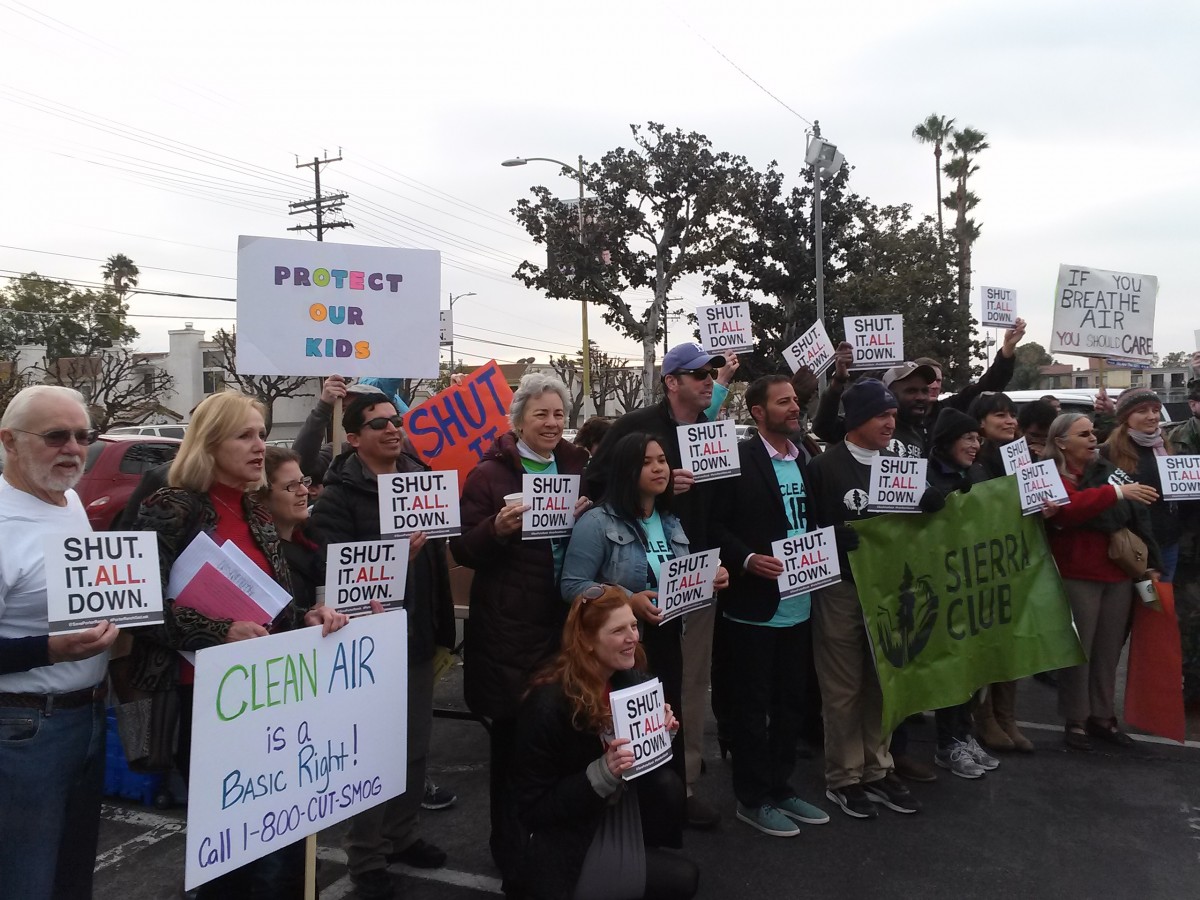 There’s no end in sight for what some environmental activists call the country’s biggest environmental catastrophe since the BP Deepwater Horizon oil spill in 2010. A massive leak of methane gas from an underground storage facility in a suburb north of Los Angeles has displaced hundreds of residents of nearby Porter Ranch since a pipe broke several hundred feet beneath the surface of a 3,600-acre gas field in late October.

Environmentalists are sounding the alarm about the leak’s effect on greenhouse gas emissions and say that without greater regulation and oversight of the natural gas industry, future gas leaks, large and small, are inevitable. Larry Buhl has more from Los Angeles.

“Not only is it in the air, it’s in my house, it’s in my furniture it’s in my body. My daughter, her sons won’t come up to my house anymore. She doesn’t want to go over there anymore, because they’ll get sick.”

“There is no, no reason for any kind of plan to not be in place.”

That was Maureen Capra, LA County Supervisor Michael Antonovich, and Cheri Derohanian, three of hundreds who attended a hearing on January 8. All day, residents sickened and forced to evacuate their homes voiced anger with Southern California Gas Company, a division of San Diego-based Sempra Energy, in front of an independent panel of the South Coast Air Quality District. That panel could shut down the entire Aliso Canyon gas storage facility and that’s what most residents who spoke at the hearing want.

The slow-motion, and largely invisible, disaster has been unfolding in the dusty foothills north of Los Angeles since October 23. That’s when an injection-well pipe broke. The California Air Resources Board says that at its height nearly 60,000 kilograms of methane per hour were released into the air. By December 22, a relief well cut the rate of escaping gas in half.

On windy days the strong rotten egg odor caused by an additive to the gas can be smelled miles away in the heavily populated San Fernando valley.

Governor Jerry Brown visited the site earlier this month and declared a state of emergency for the nearby Porter Ranch community.

Residents and city officials are blaming SoCalGas for being too slow, for not updating their aging equipment, for not having an emergency plan and even for misrepresenting the extent of the problem.

Los Angeles City Councilman, Mitch Englander says, “They’ve been responsive. They’ve been reactive. They were never proactive. They never had a plan in place. There was never contingency plan that what happened if one of these wells blew like it did.”

Last month an attorney for SoCal Gas admitted the company lied when it said it replaced a safety valve on the well in 1979.

The review board says it will make a decision about shutting down the facility as early as next week. Right now SoCal Gas is drilling past the well and plug it at the source, a process it says will take more than a month.

Southern California Gas did not respond to requests for comments to this story.

Walker Foley is an organizer from Food and Water Watch. He criticizes what he calls a too cozy relationship between industry and regulators.

“What we’ve seen in Governor Brown’s tenure in these last few years is that he’s made really aggressive moves to deregulate the entire industry. As a result, we’re permitting things we shouldn’t,” Foley explains. “We’re not funding the regulatory agencies the way we should be, and as the LA Times has been reporting, the regulatory agencies are actually deferring to the industry about how best to do their own jobs. It’s a real sham.”

More than 25 lawsuits have been filed against the utility. The California Public Utilities Commission could issue massive fines and penalties, but has yet to do so.

Beyond the immediate impact to surrounding communities, the leak is raising questions about the state of the country’s extensive natural gas infrastructure. As natural gas surpasses coal as a leading energy source, outdated and decaying pipes and facilities could lead to more disasters like Aliso Canyon, whose storage facility and pipes are more than sixty years old.

Amy Townsend-Small is a geology professor at the university of Cincinnati. She says massive and sustained gas leaks, like Aliso Canyon, could also accelerate climate change.

“Methane, a predominant component of natural gas, is a really powerful greenhouse gas. It’s somewhere between 30 and 80 times more powerful than CO2 at trapping heat,” Townsend-Small says. “A rapid increase in methane emissions potentially could trigger some of these scary tipping point,s like destabilization of ice sheets or ocean currents.”

The EPA is in the process of creating federal rules that will, for the first time, directly regulate oil and gas emissions. But they will only address pollution from future oil and gas facilities, not existing ones.

And those regulations won’t do anything to help residents near the Aliso Canyon facility right now.