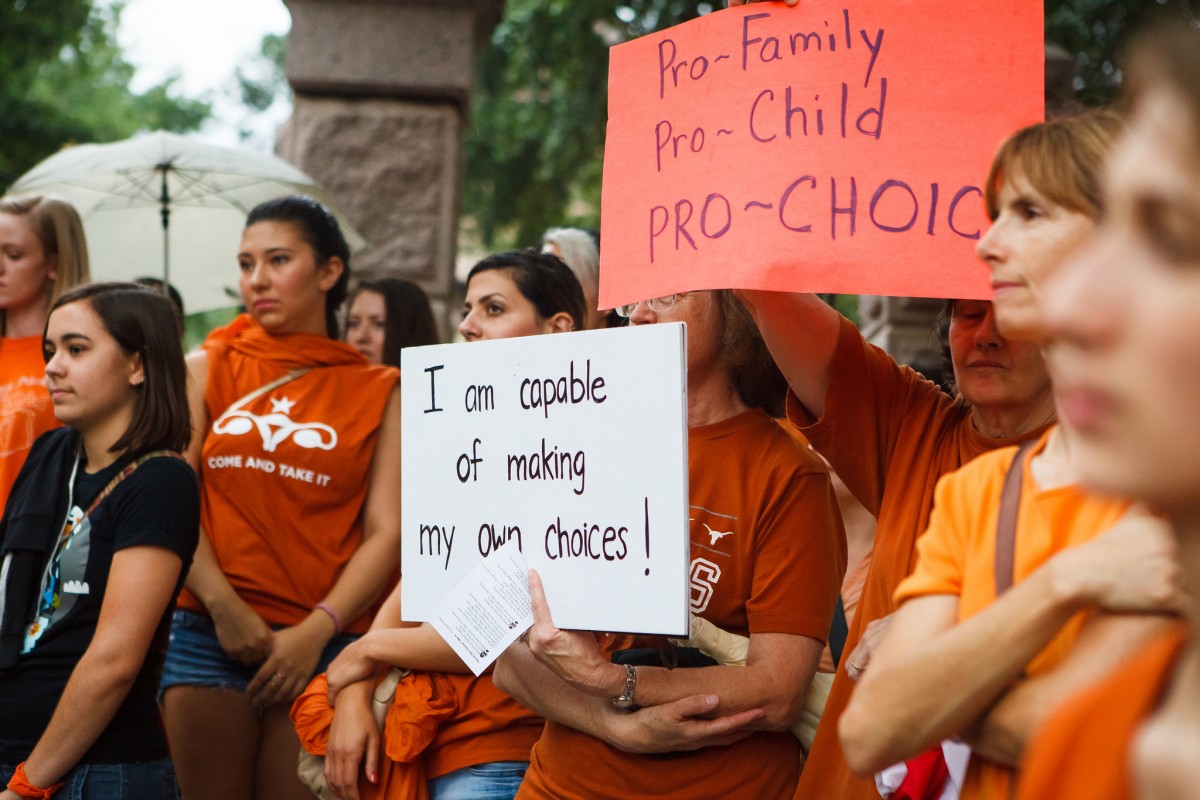 This week marks the 43rd anniversary of the Supreme Court ruling on Roe v. Wade, a case that codified a woman’s right to choose whether to carry a pregnancy to term or to have an abortion. This year, the high court is due to hear another potential landmark case on access to abortion. Whole Woman’s Health v. Cole argues that restrictions placed on abortion providers by a Texas law known as HB 2 violate the 14th Amendment by placing an undue burden on women seeking abortion services in the state. Shannon Young has more.

Prior to the passage of House Bill 2, more than 40 abortion clinics operated in Texas. Now, only 18 of those clinics remain open, many operating under the terms of a temporary stay. If the Supreme Court ultimately rules to uphold the 2013 law, all but nine or ten abortion clinics in Texas will have to permanently shut down.

HB 2 mandates abortion clinics meet the standards of ambulatory surgical centers and requires doctors performing or inducing abortions to have admitting privileges to hospitals within 30 miles. Proponents of the law argued it would make abortions safer, but providers say the requirements were a political move intended to shutter clinics through expensive, and unnecessary, regulations.

The full implementation of HB 2 would limit legal abortions to clinics in the cities of Austin, Dallas, Ft. Worth, Houston, and San Antonio, and possibly McAllen. Court documents estimate around 60 thousand women seek an abortion in Texas each year.

“The thought that a handful of remaining clinics in Texas can absorb the demand of our state’s residents is utterly absurd,” says Ginny Braun, former CEO and Director of Routh Street Women’s Clinic, an independent abortion provider forced to close after 37 years operating in the Dallas/Ft. Worth area. The clinic temporarily suspended its services as challenges to HB2 wound through the courts, but shut down permanently in June of 2015. Braun says that before the clinic shuttered completely, Routh Street physicians saw an increase in women trying to self-induce abortions.

“We did have patients come in that had obtained what they thought was Cytotec – we have no idea what it really was – at various flea markets or on the black market,” says Braun. “And some patients had taken like 10 or 12 or those, which can be devastating.”

As the number of clinics authorized to provide abortions in the state dwindled, wait times increased. Dr. Daniel Grossman is an investigator with the Texas Policy Evaluation Project which published a study this month on how clinic closures have affected women’s access to abortion services. Grossman notes that after the Routh Street clinic closed, wait times for an appointment at the area’s remaining facilities increased from what was already around 20 days.

“Just this past December, these wait times in Dallas and Fort Worth increased to as long as 28 days for the first consultation in the mystery calls that we’ve been doing,” Grossman explains. “And clinics said that it would likely be another two weeks after that before the procedure could be performed.”

These extended waits, Grossman adds, have had a secondary effect: pushing more terminations into the second trimester.

“The fact that HB2 is increasing later abortion is concerning from a public health perspective since it is well documented that, although second-trimester abortion is very safe, it is associated with a higher risk of complications compared to early abortion,” says Grossman. “It’s also more expensive for women and there are fewer providers of later abortion.”

The wait times and often long distances to the nearest in-state clinic, have prompted some women to seek care outside of Texas.

After the birth of her second child, doctors told Valerie Peterson she was no longer able to conceive. However, when surprised by a third pregnancy, Peterson decided to have the baby and began prenatal care. But by week 16, tests confirmed severe developmental irregularities in the brain and spinal cord that would not allow the baby to survive outside of the womb.

“My doctor gave me two options: I could continue to carry the pregnancy to term and I would eventually miscarry or give birth to a stillborn baby or I could terminate the pregnancy,” Peterson recalls.

Peterson opted for the latter. Although she lives in a city with an open abortion clinic, she soon discovered that wait times ranged upwards of three weeks. She says that added agony to what was already emotional devastation. A friend referred her to a doctor in Florida and Peterson immediately booked an appointment.

“So what I did have to do, of course, is secure an airline ticket. I had to secure a hotel and stay in the hotel multiple days just to make sure that everything was going to go alright with the procedures. I had to secure care for my daughter, who is at home. And also, while in Florida, I had to secure the assistance of one of my friends to take me to the have the procedure, to get it done,” Peterson explains. “And so, it was a lot of planning that happened, and had to happen very quickly, because as we know, the longer it takes, the more expensive it is for the care to happen and this was not covered by my insurance policy. So this is something that I had to do very quickly.”

In all, Peterson estimates the out-of-state abortion cost more than $5,500.

Meanwhile, those abortion providers still able to operate in Texas report severe strain on their resources. Of the ten facilities that could remain open if the Supreme Court upholds HB 2, half are operated by Planned Parenthood.

Ginny Braun, of the now defunct Routh Street Women’s Clinic, says even if the high court overturns HB 2, there are no plans to reopen the facility she used to run.

“It’s sort of like once Humpty Dumpty has fallen off the wall, you really can’t put him back together. So at this time, I’m still working on issues related to the closure of the clinic, such as equipment leases, taxes,” Braun says. “As you may know, independent providers are taxed at 35 percent, not like the Planned Parenthood. So just because we’re closed, it doesn’t mean that our expenses have stopped. So for the time being – no, there is no plan for Routh Street Women’s Clinic to ever reopen.”

The Supreme Court is due to hear arguments on Whole Woman’s Health vs. Cole on March 2nd.