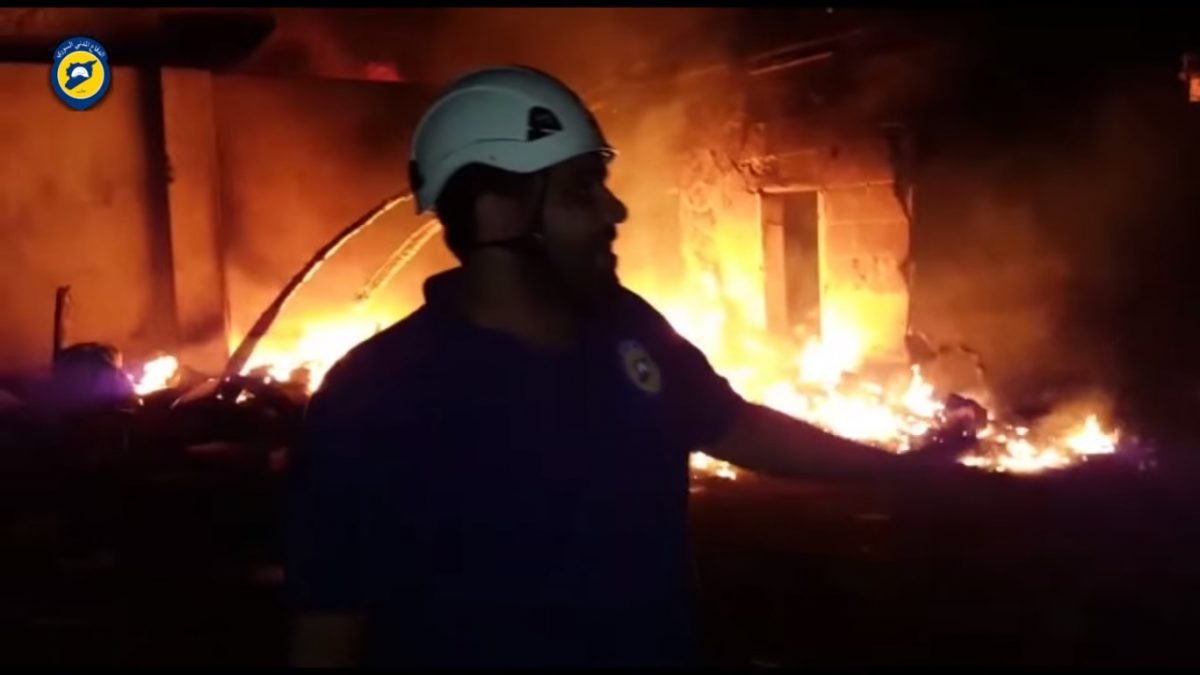 Attempts to salvage the tattered remains of a Syrian ceasefire agreement have taken center stage at meetings in New York as world leaders attend the annual United Nations General Assembly meeting. The ceasefire agreement between the U.S. and Russia was for a seven-day truce, which began last Monday, aimed to provide a window during which humanitarian aid could be delivered to civilians trapped in besieged areas of the war-torn country. But Monday, that very aid became the target of deadly airstrikes. Shannon Young has more.

[Editor’s note: This story was updated Friday for the Weekly Edition. Text of original story below.]

The cautiously optimistic statements of diplomats on the sidelines of the UN General Assembly meeting in New York stand in sharp contrast to an escalating series of attacks on the ground in Syria.

Almost immediately after the Syrian military declared the end of a week-long ceasefire, a barrel bomb attack in Orem Al Kubra in rural Aleppo struck a warehouse filled with United Nations refugee agency aid. The items – including food, blankets, diapers and medicine – were to be distributed to almost 80,000 civilians trapped in the besieged area.

A video posted online by an organization of Syrian volunteer search and rescue workers known as the White Helmets shows the burning aftermath of the attack.

An unidentified White Helmet volunteer says Syrian government forces were behind the bombing.

Twenty civilians and the regional head of the Syrian Arab Red Crescent are among the dead. They were unloading packages from trucks that had just arrived at the warehouse in a marked humanitarian aid convoy when the first bombs dropped. Rescue workers responding to the warehouse bombing were also attacked.

Moscow denies either Russian or Syrian government troops were responsible.

According to the Syrian Arab Red Crescent, 54 of its staff and volunteers have lost their lives in the line of duty in the last six years.

U.S. officials say they thought they were striking targets linked to ISIS, also known as Da’esh.

Acknowledging the U.S.-led strike on Syrian troops, U.S. Ambassador to the United Nations Samantha Power said that coalition forces immediately halted the attack when Russia informed them that they may be striking Syrian military personnel. But she called Russia’s indignation “uniquely cynical and hypocritical.”

Powers went on to point out that “since 2011, the Assad regime has been intentionally striking civilian targets with horrifying, predictable regularity. They have besieged civilian areas, prevented lifesaving humanitarian aid from reaching people who are starving to death and dying of illnesses that could be treated with basic medicine which is ripped out of trucks and pocketed by Syrian regime forces.”

“On Saturday, the planes of the American alliance attacked position of the Syrian Arab Republic in the surrounding area of the Deir ez-Zor airport which led to many causalities,” Aala said. “This American incursion which proved to be deliberate and planned, facilitated Da’esh’s control of this position. This also proves that this illegal alliance – which was established by the U.S. with the excuse of fighting, and which contains a number of countries that had a major role to play in arming Da’esh is colluding with this terrorist group and coordinates with them.”

Members of the International Syria Support Group met in New York Tuesday, but little came of the gathering other than to reaffirm past stated commitments and an agreement to meet again later this week.