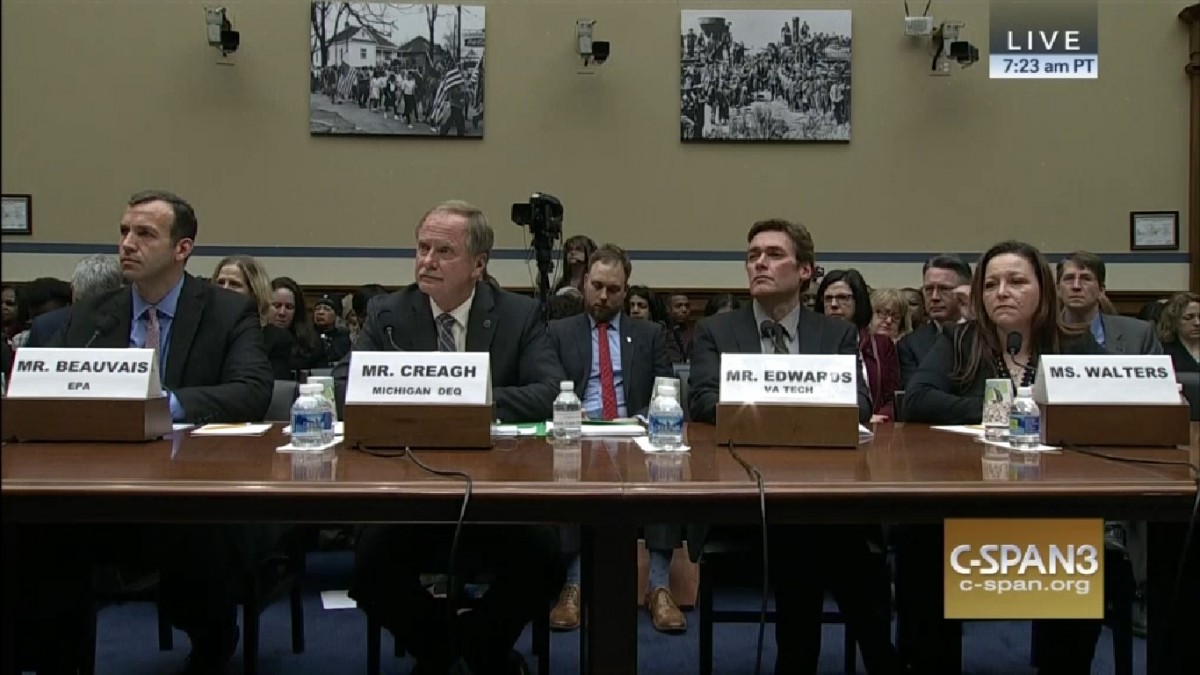 The panel responding to questions about the water crisis in Flint, Michigan. (Photo credit: CSPAN)

The water crisis in Flint, Michigan reached congressional chambers today as an investigation heats up to figure out who was responsible for the lead crisis and what can be done about it. FSRN’s Tanya Snyder reports.

The FBI announced earlier this week that it’s joining an ongoing criminal investigation into the roots of Flint’s lead water crisis. The bureau is joining several other agencies and prosecutors in the effort to figure out if any laws were broken.

But, it’s already clear that the EPA’s lead and copper rule was broken. The rule mandates that anti-corrosives should have been added to the Flint river water so it wouldn’t leach lead from the pipes into drinking water. But the Michigan Department of Environmental Quality said that wasn’t necessary.

MDEQ director Keith Creagh, speaking Wednesday at a House Oversight Committee hearing in Washington, D.C.  says, “The rigor should have been more when water source changed.”

The passive voice there isn’t entirely misplaced. There’s blame to go around. Flint resident LeeAnne Walters found that her own water had lead levels nearly 50 times higher than the EPA’s “action level.”

“Regardless of this information, and the fact that my son had lead poisoning, the city and the MDEQ still continued to tell everyone that the water was safe as the EPA sat by and watched in silence,” Walters explains.

Miguel Del Toral was the one regional EPA official willing to work with Walters to get to the root of the problem rather than hiding it. He was ordered to stop talking to anyone from Flint, or about Flint, and his findings were buried.

It took researchers from Virginia Tech to compile a body of evidence to force officials to acknowledge the large-scale lead poisoning in the city. Virginia Tech scientist Marc Edwards says the EPA casts a blind eye to incompliance.

“Only thing I could conclude is that they don’t care about children lead poisoned by drinking water,” Edwards says.

Edwards begged Congress to help fix the EPA and other agencies that are allowing the water to be poisoned.

“They have repeatedly engaged in scientific misconduct. In the written testimony I submitted to the committee I outline over the last 10 years, five examples of falsified reports from these agencies that have conclusions directly endangering children in this country, that have caused children to be lead poisoned,” explains Edwards. “And they refuse to correct the scientific record even in the case of an EPA report that they acknowledge has no data. No data, after nine years. I’ve tried to get this report corrected. They refuse to retract this report. Their callous disregard for the most vulnerable amongst us has played out most recently in Flint, Michigan.”

In the time since the nation’s attention has focused on Flint, other municipalities around the country have found that their water, too, has higher lead levels than had previously been acknowledged. Walters says the EPA refuses to enforce its own lead and copper rule, or LCR.

“It is a national problem. Only 10 states test accurately according to the LCR. Twenty-one states do not reveal their sampling instructions. And 19 states have testing similar to loopholes to the Michigan ones,” Walters points out. “There is no justifiable reason for testing with loopholes except to hide lead.”

The officials best suited to answer the hard accountability questions were conspicuously absent from Wednesday’s hearing. Members of Congress lamented that they didn’t have the chance to question Governor Rick Snyder.

The regional EPA head who silenced Miguel Del Toral resigned a few weeks ago, and her last day in office was Monday.

And Darnell Earley, the state-appointed emergency manager who was calling the shots in Flint at the time of the water supply switch, refused to attend the hearing despite a subpoena. Oversight Committee chair Jason Chaffetz says he’s calling on the U.S. Marshals to hunt Darnell Earley down and give him the subpoena for the next hearing.