Jewish and Arab parents push for integrated schools for all religions, cultures in Israel 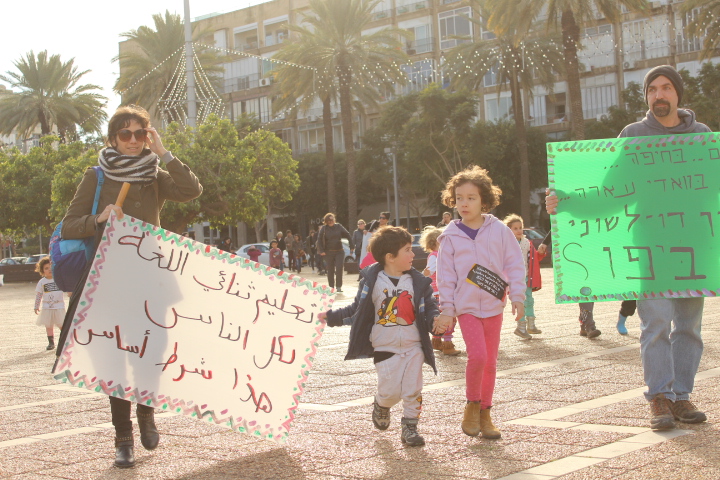 Parents walk with the children to demonstrate for a culturally-integrated school in Israel. (Photo credit: Lena Odgaard)

While tensions between Israelis and Palestinians have surged in recent months increasing ethnic cracks in Israeli society, a group of Jewish and Arab parents in Jaffa are fighting to open a school that pays equal respect to all its student’s religions and cultural traditions. FSRN’s Lena Odgaard files this report.

A group of around 70 Jewish, Christian and Muslim parents and children gathered in front of City Hall in Tel Aviv chanting “Hand in Hand,”  first in Hebrew, then Arabic. The children wore stickers on their jackets and sweatshirts with the words “Jaffa demands school for all: bilingual, equal and public.”

The parents want the municipality to allow them to open a public school in neighboring Jaffa under the auspices of Hand in Hand, an organization that runs bilingual, public Arab-Jewish schools throughout Israel.

“That’s what we are fighting for. We want to be able to give our kids education based on equality that is bilingual, multicultural. That will expose our kids to all types of populations, nationalities, religions and backgrounds,” explains Honey Shamy, a Palestinian Christian mother, has two young daughters, the oldest of whom is ready to start elementary school in the fall. Both girls attend a kindergarten run by Hand in Hand and this has given her hope in better future.

“My oldest has been part of it since she was 3 years old,” says Shamy. “I think it is natural for her to be amongst everybody. I don’t think she distinguishes. She loves it.”

The first bilingual public kindergarten in Tel Aviv and Jaffa opened less than three years ago for 38 children. Today the community includes around 170 children aged three to seven.

A group of young girls are playing in a colorful plastic house on a playground in Jaffa’s Hand in Hand kindergarten.

Asaf Ronel, a Jewish father has come to pick up 4-year-old Ruth. He explains that he and his wife decided to move to Jaffa because of the kindergarten.

“For many years I couldn’t believe there is a solution to the Israeli-Palestinian conflict, I was very much pessimistic about the future here and very much afraid of what would happen to me and my family,” Ronel says. “But, ever since my girl started learning in the kindergarten I discovered there is an option for living together, there is an option for joined life.”

In Israel, the public school system is divided into different tracks: one for orthodox Jews, one for secular Jews and one for Palestinian Christians and Muslims. The Hand in Hand schools are trying to offer a non-segregated option by establishing a fourth bilingual and mixed track.

Tel Aviv and Jaffa are a part of the same municipality. It’s the second largest in Israel, and often portrayed as a hub for multiculturalism and tolerance. But the parents didn’t find much support from the local authorities when they asked to open an accredited primary school in partnership with Hand in Hand.

A year ago, the municipality agreed to open two first grades inside an already existing Hebrew school with guidance from Hand in Hand. But only weeks into the school year, the school refused to let the students have days off for the Muslim holiday, Eid Al-Adha. This made parents worry that if even religious holidays were sensitive, how would the school tackle more complex issues, such as the conflict.

“All that adds to the fact that, you know, we were not given the basic values which we believe we should have: an equal school for children, an equal school for everybody,” Ronel points out. “We decided we can not do it anymore and asked to move to someplace else inside the Jaffa public school system.”

Speaking to FSRN over the phone, deputy mayor of Tel Aviv, Asaf Zamir, said the municipality welcomed the ideology behind the bilingual school but refused to give autonomy to any group of parents or organizations that wants to open their own school.

“Listen, a public educational system in a city of half a million people is not determined by every little group of parents who think they have a better idea of what they want,” Zamir says.

Until the municipality comes up with a solution, the parents have decided to take matters into their own hands. In an unprecedented move, they seek to enroll the coming first graders – Jewish and Palestinian – into one of the area’s Arab schools, and expect the second graders to follow suit at the beginning of the new school year. The deputy mayor sees it as a protest but says they won’t object to it.

“If they will, it’s their choice and they can do it. We will allow it,” says Zamir. “I just don’t believe it’s possible.”

The parents’ battle for an integrated school comes at a time when critics warn the current right wing government is cracking down on multiculturalism in the Israeli education system. In December, Education Minister Naftali Bennet banned a Jewish-Arab romance novel from being used in Israeli high schools and currently a new civics textbook is drawing accusations for being ‘ethnocentric’ towards Israel’s Jewish religious right.

While negotiations with the Tel Aviv-Jaffa municipality are still ongoing, Hand in Hand has no doubt that the parents will get their school eventually.

“I am absolutely certain that in the long run it will work out,” says Rebecca Bardach, a representative of Hand in Hand and met FSRN at its first school in Jerusalem. Established in 1998, it has now seen five classes of high school seniors graduate and expanded its model to six schools throughout the country.

“There is no greater agent of change than that parent who desperately wants their child to go to your school,” Bardach points out. “They will push everybody, ask the municipality, everybody to get their child into the framework that they believe is the best framework, in this case not only for their children but for the society that they want to be creating.”