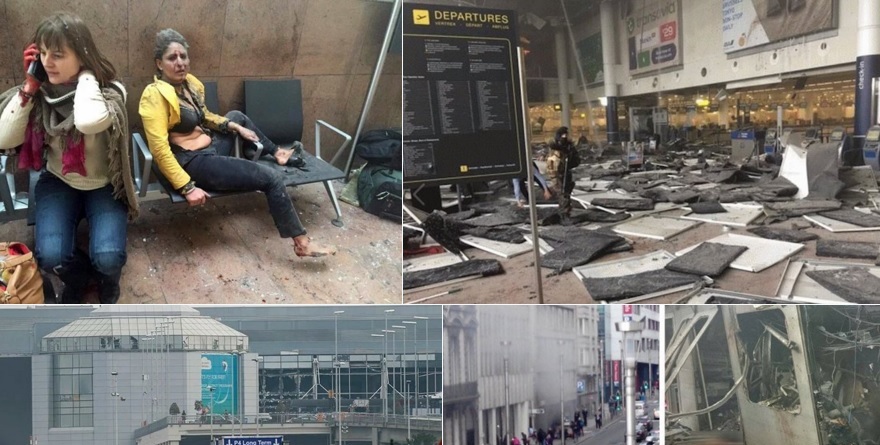 The self-described Islamic State has claimed responsibility for twin attacks in the Belgian capital of Brussels today.  Suicide bombers first targeted passengers checking in about 8 a.m. at the Brussels Airport. The second attack  took place about hour later at a busy downtown metro station. Belgian officials have confirmed the deaths of at least 34 people, another 200 were injured.  The attacks come just days after authorities arrested a man they say is the sole surviving perpetrator of the November attacks in Paris. FSRN’s Jacob Resneck spoke with Brussels-based journalist Daan Ballegeer earlier today.

Jacob Resneck: Daan Ballegeer, you were on the streets earlier. Where are you now in Brussels and what have you seen?

Daan Ballegeer: I’m close to Maalbeek, the station that was attacked earlier this morning. People are quite nervous if somebody who was working here would have been in the station because most of them use it, so we’re still trying to find out if everyone’s okay. I walked out and went to Maalbeek Station, which was already blocked by police to get everybody far away enough from where it happened, from the station itself. When I got out, I went to talk to a man who was standing there, who had this big gray towel around his neck, just to keep him warm, and I went up to him and said, “Sorry, but you know, what happened?” And he said, “We were working at the building right next to Maalbeek Station when we heard the blast and explosion.” And he said, “We just went down and we saw people running out. And there was blood everywhere and their hair was burnt and we saw blisters on their hands. And we tried to help, but we couldn’t get in because there was too much smoke. So we tried to get them clean, tried calm them down.” And he was really, you know, really stressed.

But, there was this other guy who was not saying a thing. So I asked him, “How did you experience this?” And then he started to explain, “Well, I’m not really sure, when it happened we didn’t think about a second attack. You just see people running out to get help and we went up to them and gave them help.”

JR: On Friday, police in Brussels captured Salah Abdeslam, and he’s accused of being one of the plotters behind last November’s attacks in Paris. The Belgian government said at the time they feared Abdeslam had been plotting something in Brussels, so on what level were today’s attacks almost expected?

DB: Journalists all over this country and, I guess, all over Europe have been asking the government, but they do not want to respond to that. It would be strange that there is no link at all, because we haven’t got any clue that the people who did this this morning are from Molenbeek, the terror center of Brussels, to put it in an exaggeration, but everybody seems to think that they are from there because, you know, we’ve been talking about Molenbeek the entire time. So, unless they turn out to be from somewhere else, this is going to land back to the community there and what was going on.

Last week, as you said, on Friday, Salah Abdeslam was captured. It was a huge victory that terrorists could not escape justice. But right now, even though their main man that we were looking for has been captured, it turns out there are other people who are intent to do the same thing.

JR: Leaders in European capitals are already vowing to defend open societies and democracy, while at the same time combating violent extremism, sound much like they’re already on a war footing. From where you are with police and soldiers on the streets, do people seem to be reassured by this rhetoric or increasingly fearful?

DB: Well, here in Brussels we have always had this strange experience of seeing military people on the streets ever since the attacks in Le Bataclan in Paris. And, in the beginning, it was very frightening, but then people got used to it, pretty rapidly. Because, you must remember, we haven’t had a lot of terrorist attacks here in Brussels and in Belgium. The biggest political conflict that we had, that had anything to do with violence, happened in the 70s when a parliamentarian who was angry, he put a cow to our federal parliament. So we have always had political conflicts, but never the violent ones. And the attack that we have had here, like in the Jewish museum two years ago, it was committed not by a Belgian. And the Belgians that did commit attacks, like the ones in Paris, it was in Paris. So, we have never really, I guess, had the frightening event that we had this morning, that people who live here, who take the train, who take the plane, that they are being attacked. It’s very difficult to see how this will impact our open society, because suddenly it’s coming really, really close.

Daan Ballegeer is a Belgian journalist based in Brussels. He spoke to FSRN’s Jacob Resneck in Bonn, Germany.