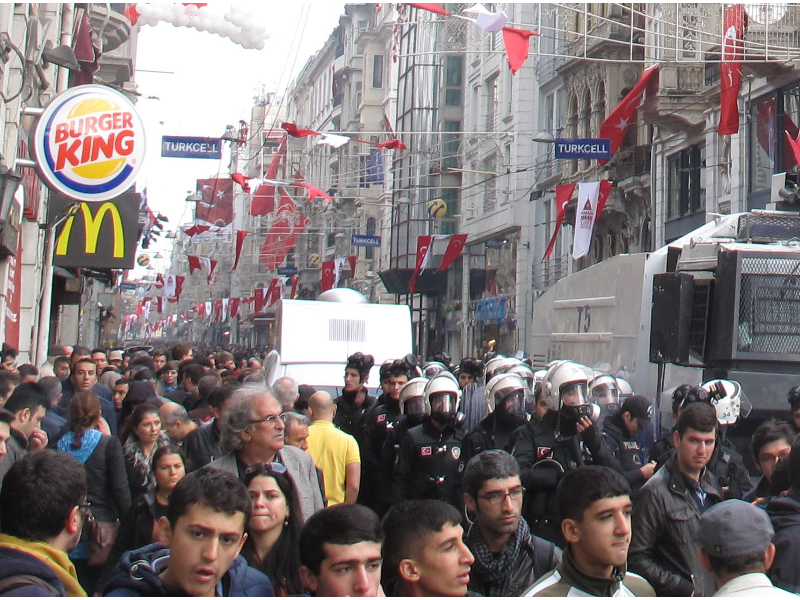 Riot police in central Istanbul stand at the ready as thousands of Turkish leftist and Kurdish demonstrators rally against the government's Syria policy accusing the ruling Islamist AK Party of being complicit with Islamic State. Photo Credit: Jacob Resneck/FSRN

In Turkey, thousands marched during the weekend in solidarity with the besieged Syrian city of Kobane. This comes after Ankara – under pressure at home and abroad – allowed heavily-armed Kurdish forces from Iraq to reach the city through Turkey to reinforce defenders there battling against ISIS. Jacob Resneck reports from Istanbul.

Thousands of protesters thronged up a narrow pedestrian street in central Istanbul chanting YPG, the name of the Syrian Kurdish militia defending Kobane from falling into the hands of ISIS.

Turkey considers the People’s Protection Units (YPG) a terrorist group because of its links to the guerrilla Kurdistan Workers’ Party (PKK), the Kurdish militia that has been fighting a decades-long battle for Kurdish rights in Turkey. It’s largely because of this internal struggle between Ankara and the PKK that Turkey has resisted supporting Kurdish forces within Syria and from nearby Iraq in the fight against ISIS.

Omer Agin, a columnist with the pro-PKK newspaper Ozgur Gunden, says the alliance between the peshmerga forces from Iraq’s autonomous Kurdish region and the YPG marks a new chapter for international cooperation among the region’s Kurds.

“Now the fact that the peshmerga are going there means a form of solidarity among the Kurdish people. It has to be seen that way. The whole world welcomes this,” the 66-year-old said.

Hundreds of riot police stood by in what were often tense scenes. But despite banners and slogans from the outlawed PKK and YPG, which Turkey considers terrorist groups, security forces did not intervene.

A 19-year-old Turkish sociology student who said he didn’t want to give his real name for fear of arrest says Turkey has been too accommodating to Islamic State fighters who operate right on its border.

“We should support the revolutionary forces against jihadists, against Bashar al-Assad and against imperialist forces,” the Turkish man said.

Similar scenes played out in other large cities in Turkey with tens of thousands marching in the predominately Kurdish city of Diyarbakir. No major incidents of violence were reported.

Despite tough rhetoric from Ankara equating the PKK and ISIS as violent terrorists, analysts say Turkey doesn’t want to let an 18-month ceasefire with the PKK unravel. Ozgur Unluhisarcikli, an Ankara-based analyst with the German Marshal Fund think tank, says both camps see a permanent peace settlement as elusive; neither wants to go back to fighting.

“I don’t see the positions of the PKK and the Turkish government reconcilable,” he said.

Meanwhile, on the border with Syria, about 200,000 people have fled to Turkey and are being housed in refugee camps and private residences housing near the frontier. Another 2,000 remain in the city under siege.

As the battle continues to rage on Turkey’s doorstep, the city remains a symbol of international resolve against Islamic State as well as a rallying call for Kurdish people across the region and beyond.