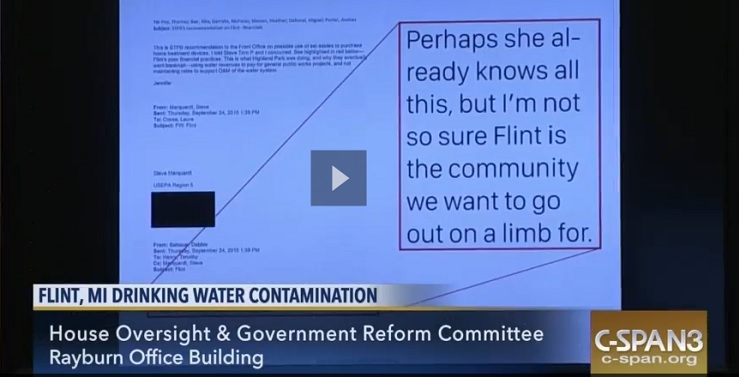 An internal EPA memo in which the unknown author says "...I'm not so sure Flint is the community we want to go out on a limb for." (Photo Credit: C-Span screenshot)

Congressional hearings on the Flint, Michigan water crisis continued Thursday with the EPA chief and the Governor of Michigan in the hot seat. Lines were drawn in what boiled down to a finger pointing battle between federal oversight and state’s rights. FSRN’s Nell Abram has more.

Utah Representative Jason Chaffetz read from an internal EPA memo at the opening of another deeply contentious hearing on Capitol Hill during which lawmakers continued to both probe and politicize the Flint, Michigan water crisis. “I’m not so sure Flint is the community we want to go out on a limb for,” the memo said.

For decades, Flint got its water from Detroit’s supply. But in 2014 the cash-strapped, largely African American city switched to a less costly – though more polluted – source, the Flint River. State government officials assured the EPA that the water was adequately treated to prevent lead leaching from corroding pipes, while telling city officials that corrosion control wasn’t necessary.

One year after the switch with no corrosion control in place, Flint’s lead-loaded water had poisoned the population.

Representative Robin Kelly, a Democrat from Illinois, is chair of the Health Brain Trust for the Congressional Black Caucus: “Part of my mission is to look out for health care for under-served communities, low-income communities and communities of color. I have to tell you this really reeks of environmental discrimination in my opinion.”

Democrats on the committee took Michigan Governor Rick Snyder to task. Maryland Democrat Elijah Cummings squarely placed the blame for the poisoning of Flint on the state government, which ran the city through an un-elected emergency manager.

Michigan Governor Rick Snyder thanked the EPA water specialist who rang the warning bell on the lead contamination, but shifted attention to the federal agency, blaming them for advising Flint officials to ignore warnings from the agency’s own Miguel Del Toral.

“We are taking responsibility in Michigan, and we are taking action,” remarked Snyder. “And that’s absolutely essential here in Washington too. Inefficient, unaccountable bureaucrats at the EPA allowed this disaster to continue unnecessarily.”

Republicans on the committee joined Snyder in largely blaming the EPA for what they called inaction after the fact. Most took an infuriated tone when addressing EPA Administrator Gina McCarthy. Appointed by President Obama, McCarthy defended the agency and said that while she regrets not pushing harder, the legal framework for EPA involvement in state enforcement is clear.

“I think there were dots that we could have been connected,” said McCarthy. “I think we spent way too long trusting the state that they were doing the right thing. We begged to provide technical assistance beginning in March. We begged them in April to do corrosion control. We begged them at the city level and the state level with personal communication and professional.”

McCarthy told the U.S. House Committee on Oversight and Government Reform Chairman that the “system failed” and the EPA is “part of that system.”

The federal environmental agency is responsible for the outdated US Lead and Copper Rule. But according to McCarthy, despite overdue updates to the rule, had the state Department of Environmental Quality, or MDEQ, followed it as currently written, the hazardous levels of lead in Michigan’s public water supply would not have occurred.

While Flint has now reverted to the Detroit water supply, residents are still saddled with a decrepit infrastructure. Governor Snyder said refunds are underway for residents who paid for the contaminated water – some of which never even made it to their spigots, draining out through the cracked and leaky municipal pipes.