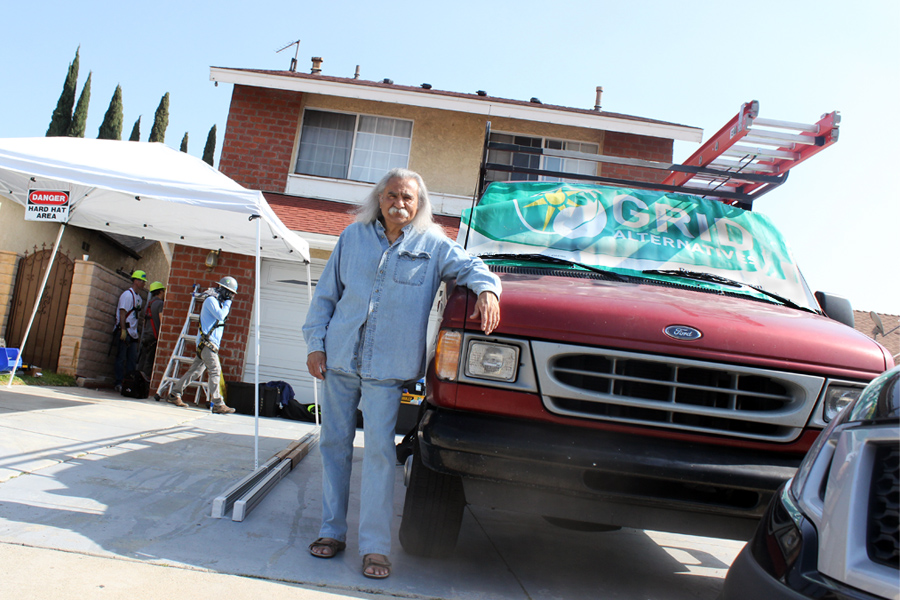 Homeowner Alfonso Fox Orozco says that he has wanted to power up with solar for a long time, but could not afford it.

A new study by the federally-funded National Renewable Energy Laboratory has significantly increased estimates of solar power’s potential to meet energy needs in the United States. The research examined a number of factors in 128 U.S. cities to determine which are best suited to generate solar power using rooftop arrays and found that California has by far the greatest capacity for rooftop solar generation on small, medium and large buildings. In Los Angeles, researchers project that up to 60 percent of the city’ s energy needs  could be met with rooftop solar. However, the upfront costs of the cells and their installation remain a hurdle for many. Lena Nozizwe reports on efforts to bring solar panels to the rooftops of low-income residences while creating local job opportunities.

There is a certain predictability to the City of Commerce subdivision just east of downtown Los Angeles. The homes are all two-stories, painted in earth tones and they all feature green lawns. But one residence is becoming an outlier. About a dozen workers are installing the underpinnings for solar panels on the roof of Alfonso Fox Orozco’s home.

“Well I’ve always wanted solar because I am aware of how it works and the benefits that you reap,” Orozco explains. “I was interested for a long time, but unfortunately I couldn’t afford it because, even with all the incentives, it’s still a price tag.”

Orozco says he plans to see a 50 percent drop in his electricity bill once the array is up and running. His home is one of about 1,200 across the country, 240 of them in Los Angeles, that will power up via solar this year with help from the organization, Grid Alternatives.

The nonprofit offers solar panels and installation services to qualifying low-income homeowners at no cost, thanks to volunteers, staff members and a portfolio of public and private grants.

“I found out about Grid Alternatives. I started volunteering for them, did multiple installs. And then around June of last year I got just enough experience to where I actually got hired by Solar City,” says Lynn Fernandez, who is now back at Grid Alternatives, this time as a paid staffer.

On this job site in Commerce, she is one of the supervisors. That the 24-year-old college student has already held two jobs in the solar industry underscores just how the sun is also helping to power the economy in the Golden State.

The Solar Foundation says that in a one-year span beginning in November of 2014, solar industry jobs grew by 20 percent nationwide. California is home to the largest number of those jobs: almost 76,000, according to the Solar Energy Industries Association.

It’s not surprising when you consider that more than 3.3 million homes in California now have solar power. The solar trade group says Arizona comes in a distant second with 327,000 solar homes.

Michael Kadish, director of the LA office of Grid Alternatives, says legislators from both sides of the aisle in California have helped to make the state a national leader in solar energy.

“I think overall a very large percentage of the solar jobs in the United States are in California. I mean, we’re a really big chunk of those jobs. And a lot of that’s due to the progressive policies.”

Homeowners hoping to qualify for a rooftop solar array must prove they meet the Housing and Urban Development Department’s definition for “low income” for the area in which they reside.

At the Commerce site, 24-year-old volunteer Eddie Solis says he is only 90 days away from getting his certification to install solar or photovoltaic systems.

Solis is with another nonprofit group, Homeboy Industries, which provides second chances for former gang members and prisoners. Solis falls into the latter category.

‘’I am very grateful to being able to repent and being able to be forgiven for the past things I have done in my life,” says Solis. “Just within the last six months of me getting out of prison, I have done more things than I have accomplished with the first 23 years of my life, you know?”

Prospective solar workers and low-income homeowners alike are now finding a place in the sun that both saves the earth and puts more money in their pockets.