For the first time, elections for UN Secretary General include public campaigns 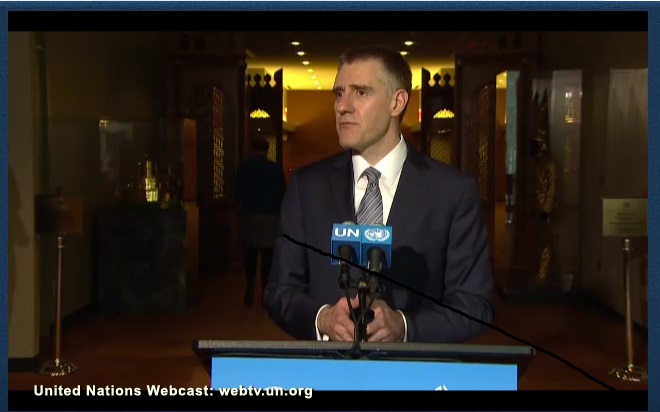 The United Nations Secretary General Ban Ki-moon is leaving office in January 2017 and the process to find his successor is underway. In the past, that process has taken place behind closed doors, with potential candidates quietly signaling their interest to the UN’s power brokers, the U.S., Great Britain, France, Russia and China.

Now, for the first time, candidates for Secretary General are being asked to publicly campaign for it, in a variety of events hosted by think-tanks, media organizations and the UN General Assembly itself. That effort is welcomed by those who want to reform the UN, but will it make a difference? FSRN’s Patricia Nunan reports from New York.

Candidates at a debate vying for the position of the world’s top diplomat: the United Nations Secretary General.

Danilo Turk, Vesna Pusic and Igor Luksic, all government leaders, are among the eight candidates to so far throw their hats in the ring to take over for Ban Ki-moon. He’s leaving office in January after two consecutive five year terms.

Known as a low-key administrator, Ban, and his predecessors, were chosen by the “P5” – the U.S., France, the United Kingdom, Russia and China, who are the “permanent five” members of the UN Security Council.

The most powerful group within the UN, the P5 reflects the winners of World War II. It’s a holdover from an earlier era that many charge is obsolete. So too, is the way the P5 picks a Secretary General, says Akshaya Kumar, the Deputy United Nations Director for Human Rights Watch.

“It’s always been a very secret discussion,” explains Kumar. “People never knew who was running, who was trying to be Secretary General really until the moment, sort of like with the selection of the Pope, the smoke came out and one name emerged.”

Now it appears as if an organization that champions democracy all over the world has decided to become a little more democratic.

“Because as the UN is reflecting on its first almost 70 years in existence, they’re thinking, ‘How can we improve things, how can we be better, and how can we commit to reform?’” says Kumar. “And one thought was that person heading the UN system should be someone who bears those values and also who came out of a process that reflects those values.”

Campaigning is now taking place at public engagements moderated by think tanks and media outlets. Aspiring candidate Vesna Pusic spoke at an event hosted Wednesday by the British newspaper The Guardian, plus New America and the United Nations Association – UK.

“You need to develop a certain level of personal authority. And it doesn’t come from just becoming Secretary General, just getting the job,” Pusic says. “You have to perform in that job.”

As the Former Deputy Prime Minister of Croatia, Pusic has two things going for her in the race to be Secretary General, as do two other candidates: she Eastern European, and she’s a woman.

There’s always been an informal geographic rotation among Secretaries General. South Korean Ban Ki-moon is, of course, from Asia, while his predecessor Kofi Annan is African, from Ghana. In UN circles, it’s now seen by many as Eastern Europe’s turn.

But no woman has ever held the job. And that fuels what some long-time observers call the organization’s surprising culture of sexism.

“When I’m inside the UN, I remember, this is not really New York,” says Dulcie Leimbach, editor of Pass Blue, an independent news site about the UN. “This is the UN, and it’s full of diplomats from 193 countries, many of which don’t have any understanding of what it means to treat women as equals. So it always takes me a little aback when I’m there, and I’m treated like a little girl sometimes.”

Changing the dynamic at the UN headquarters could have an effect around the world, Leimbach says: “To have a woman in charge, yeah, it would help people at the UN realize, that well, actually, women are more than just objects. They actually are people with skills and experience and dedication and can do a good job.”

The public campaigning for UN Secretary General is being hailed as transformative, but it may also be entirely academic. The P5 still has the power to pick the candidate it likes best. Russia, China, the U.S., the United Kingdom and France often settle on a compromise candidate who doesn’t get in the way. But they may be fighting a rising tide – calls for reform from within the UN itself, that many believe are long overdue.