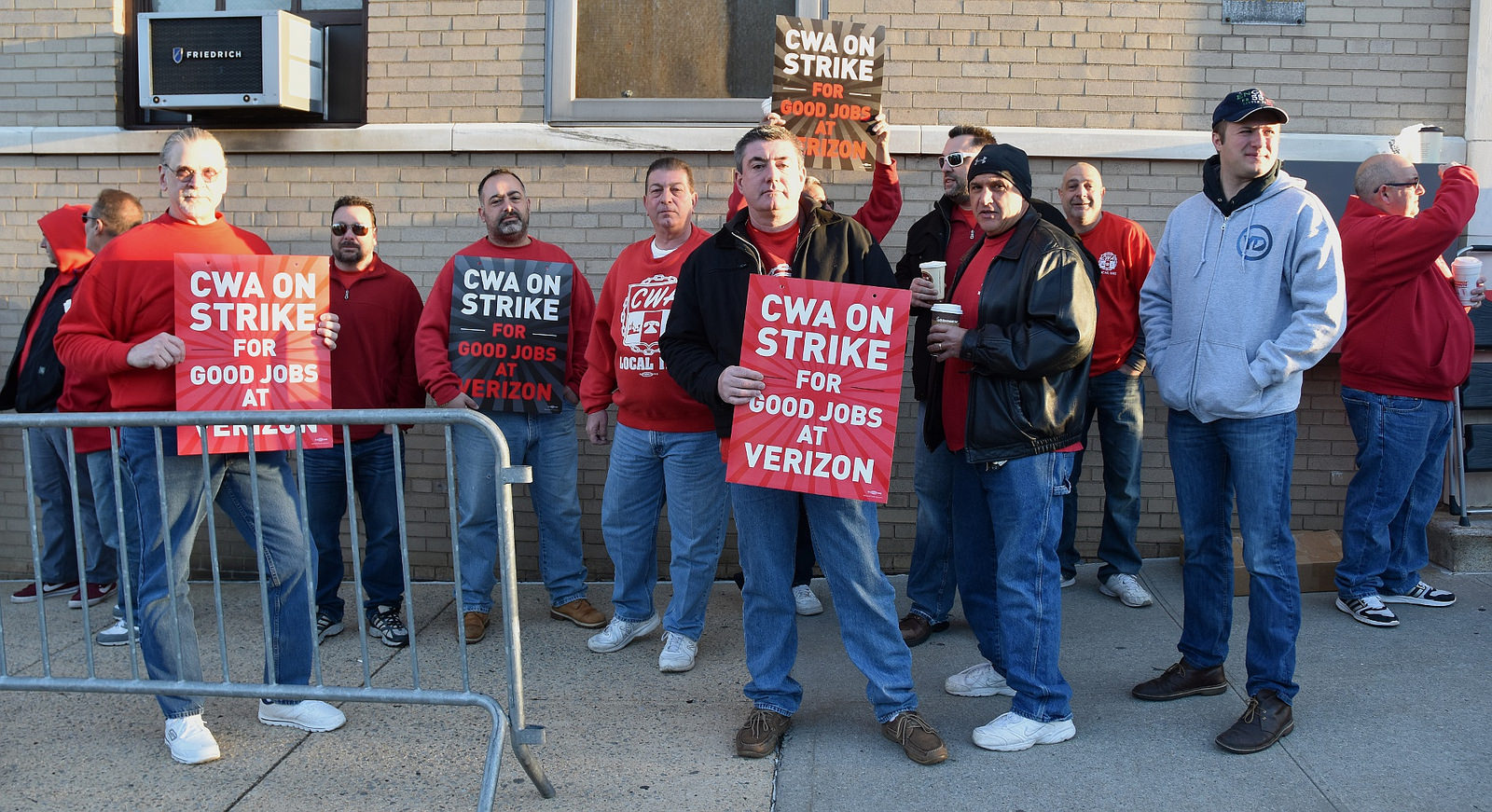 Picket lines sprouted across the northeast Wednesday as nearly 40,000 Verizon workers walked off the job. The strike in 9 states and Washington, D.C. was called by two unions, Communications Workers of America and the International brotherhood of Electrical Workers, and comes eight months after their contracts expired. It’s the second major strike against the telecom giant in the past decade and comes as Verizon pushes away from landline service and towards wireless. FSRN’s Robert Packard talked to Chuck Simpson, the president of CWA local 2204.

Robert Packard: First, bring us up to speed. Union contracts expired last August. What were the primary sticking points and has there been any movement on them since?

Chuck Simpson: Not really. Bargaining actually started June 22, before contract expiration, and we are pretty much at the same point we were on the 22nd of June. The reason that we’re on strike now is that we think we have been at the table long enough and we have made offers to the company that we think are good enough, that we should have been able to open up bargaining and settle, and have a contract and be ready to move forward.

The issues for us are primarily protecting our retiree’s benefits. Those folks that have come before us and retired have been able to retire with health care and the company is willing to keep healthcare for the individuals at this time. But they’re looking cost-shift a lot of the expenses in the retiree’s health care back to the actual retiree, which we don’t think that’s fair because retirees are living on a fixed pension and social security; they don’t have any means to be working for the company anymore, making any overtime, or having cost-of-living raises. So we want to protect them and the benefits that they’ve earned.

The other two pieces really are job security and growing jobs. And, also, the other issue, of course, is with the lack of workforce and the dwindling down of people who’ve left payroll but the company hasn’t backfilled, so, for an example, the technicians who work outside in my area, in southwest Virginia, central Virginia, and Shenandoah Valley and Southside, a lot of those techs are trained in FIOS service, but the fiber optic service that makes up FIOS is not here in our area, it’s in eastern Virginia, or northern Virginia, or Richmond. So our techs have to travel to those areas to work, so they send our guys out of town, 10 days at a time, to go there and work, and they’re usually going at least one trip a month. Of course, if Verizon chose to hire back to its capacity the number of employees it needed, then there wouldn’t be this continuous fluid movement of workers across the footprint.

RP: CWA Local 2204 President Chuck Simpson, your union said in a statement about the strike that “Verizon’s corporate greed isn’t just harming workers’ families, it’s hurting customers as well.” What sort of effects are customers experiencing and, as some critics have said, could the strike be exacerbating those effects?

CS: Well, the problems that the consumer’s facing with the greed situation of Verizon, it appears that when Verizon wants to cut operating costs, the first place they look at is the frontline of workers. So, as I’ve said, as people have left payroll, whether they’ve left on their own, they’ve been terminated, or what, Verizon doesn’t backfill those jobs. There is an issue there, where customers are calling in to talk about getting their service repaired, they’re calling in about wanting to talk to someone about moving their service, or changing their bill, they’re having trouble getting through, even when we’re not on strike. They’re having a hard time trying to reach anyone. So, in cutting operating costs and not having enough call center jobs open for people to talk to individuals and get their problems solved, they’re frustrated because they’re spending a lot of time on the phone.

Same thing with the technicians. When you cut down on the people that are in the field and you try to get more work done with less personnel, it’s extremely hard for that to come about. And so there are a lot of missed appointments during the day. That all comes from the fact that shaving operations off at the bottom and limiting personnel increases the profit for the company and yet causes a hindrance to the customer.

RP: What kind of agreement does Verizon need to reach with union leaders to resolve the strike, and is there any sort of expected time-frame for a potential resolution at this point?

CS: What they need to do in order to resolve this situation, which would be to contract from here all the way to Massachusetts, they would need to be able to guarantee CWA that we would continue to have job security for our people on the payroll and there wouldn’t be threats of laying them off and replacing them with other types of workers. They need to add jobs and grow jobs because there’s a need out there for it now. We are the trained personnel, we continuously train, we’re the ones that have the capability to do the job. And don’t try to shrink us out of existence, mainly because of the fact that you want to have a cheaper workforce and a more fluid workforce and less cost of operations to drive up profit. They want to shrink our workforce, they want to eventually try to do away with having union workers, which would mean more cost and more profit for them because they feel as though it’s an obligation to them, as far as what they’re paying, that they want to diminish and do away with that.

And also the fact that they want to be able to operate with whatever type of workforce they can utilize because we don’t see a phone company anymore. We don’t see a communications company anymore, an entertainment company anymore. It’s more like they’re a financial instrument; the more money they save, the better the stock value is, the more people are willing to invest. And then, of course, they can pay dividends back to the stock investors, that makes people want to invest even more. Naturally, the stock value’s where this needs to go for them, because the CEO, the Board of Directors, all those people in upper management, that’s where the compensation is: in stock shares. And, bottom line is, if they’re making a billion and a half dollars of profit every month, they’re not strapped, they’re not hurting like they were back in 2011 when we gave them some leeway when the market was down and they were impacted. Now, they’re making the profit and we’re helping them make the profit, and we want to be part of the company and we want to continue to grow. A lot of us have careers here and we want to be able to retire and have our pensions, so that’s what we’re fighting for and we will continue to fight because we think the middle class deserves it.

Chuck Simpson is a Verizon employee and president of CWA Local 2204. He spoke with Robert Packard by phone from Salem, Virginia.