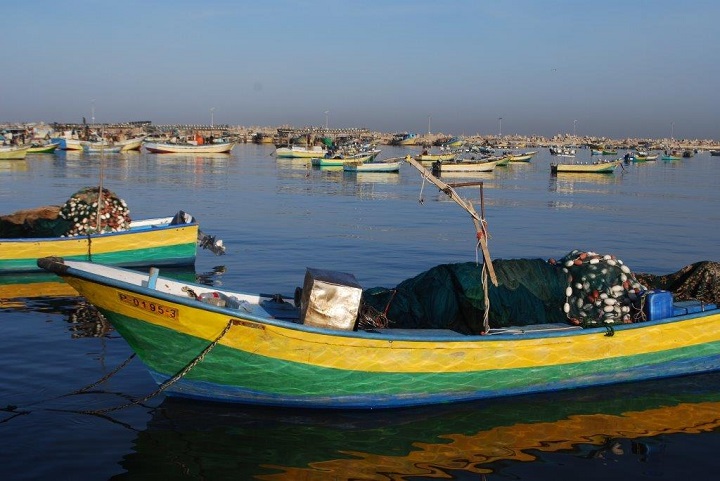 Israel increased the fishing zone off the coast of Gaza from six to nine nautical miles. But at the local market in the Nusierat Refugee camp, both sellers and buyers of fish still complain. And fishermen say the expansion isn’t enough to offset the increased limits Israel imposed during the past year and a half, during which time according to the Gaza-based fishing syndicate, the Israeli navy harassed fishermen and devastated the local fishing industry. FSRN’s Rami Almeghari has more.

Raed Mohareb is a seller of fish from the coastal refugee camp of Nuseirat in the central Gaza Strip. He has been in business for the past twenty years.

“There is fish, but not every day, and the price changes daily. For instance, these fish were not available in the market, yesterday,” explains Mohareb. “We manage to get fish from the port for high prices, and then we have to sell it to locals for a high price, too. For example, I bought this mackerel for about $3 a pound, and I sell it to locals for $3.25. “

Mohareb says fish is a luxury food for many in the region.

For the past year and a half, Um Ramzy, a mother of eight, could only afford to buy fish for her family about once a month.

“Twenty years ago, fish prices were really low and people could afford larger quantities, and make some good dishes,” Ramzy recalls. “It is unfair that we residents of this coastal region are being deprived of fish. And all because of the Israeli siege of the sea.”

Here at Gaza City’s seaport, where more than 700 Palestinian boats used to fish the local waters, only about 200 now operate. Sixty-five-year-old Abuelnemer Baker has been a fisherman for decades, working alongside his seven children.

“I swear to God, my sons and I have not been able to collect even $300 every fishing season for the past 10 years,” says Baker. “If my sons had not been able to earn a living from other sources, we would have all starved to death.”

Baker explains that the nearshore fish populations are now largely depleted. And even with the recently expanded distance limits on vessels, local fisherman can’t take their boats out to where the fish are.

For example, this time of the year is the season for fish that locals call “birds and bats,” but these particular fish can be found only about 13 nautical miles off shore – well outside even the increased Israeli-imposed limits for Gaza fishermen.

Under the Oslo Peace Accords, the fishing zone is supposed to extend 20 nautical miles. But in 2006, after Hamas rose to power in the region, Israel imposed a marine siege on Gaza, only allowing boats to work the waters within three nautical miles of shore. They later bumped that back out to six nautical miles, where it’s been ever since.

“When the fishing zone was 20 nautical miles after the installation of the Palestinian Authority in 1994, Gaza used to produce 4,000 to 4,500 tons of fish a year, some part of which were exported to Israel, the West Bank and Jordan,” explains Nezar Ayyash, head of the Palestinian union of fishermen. “But now, Gaza only produces 1,500 to 1,800 tons of fish, and that’s not even adequate to meet the local market’s needs. This is, of course, due to the six nautical mile fishing zone imposed by Israel.”

According to the Palestinian Center for Human Rights, or PCHR, in Gaza, Israeli attacks on Gaza fishermen in 2015 alone left one fisherman dead, scores more injured and 75 others arrested. All but one were released shortly following their arrest – one fisherman remains in jail. Dozens of boats were damaged in the interdictions, most with engine issues.

Khalil Shahin, spokesperson for the the PCHR in Gaza, says that Israeli security pretexts for imposing such restrictions off Gaza shores violate both international terms for offshore safety as well as the Palestinian Authority’s jurisdiction over Gaza, based on the signed Israeli-Palestinian peace accords of 1993.

“Israeli security considerations are related to Israel’s fear that fishing boats could be used to smuggle illicit materials into Gaza. In reality, this could never happen, because Gaza is under very strict monitoring by Israel,” Shahin points out. “There are at least 10 Israeli naval vessels off Gaza shores and there are Egyptian naval forces, right on the Gaza-Egypt sea borders.”

The 2006 Israeli-imposed marine siege was part of a complete clampdown on Gaza. Two years later, Israel declared Gaza a hostile entity, and since then has carried out three major attacks on the isolated coastal strip, the most recent in 2014. The UN said this week that 75,000 families are still displaced living in “in desperate conditions” and called for Israel to lift the blockade.