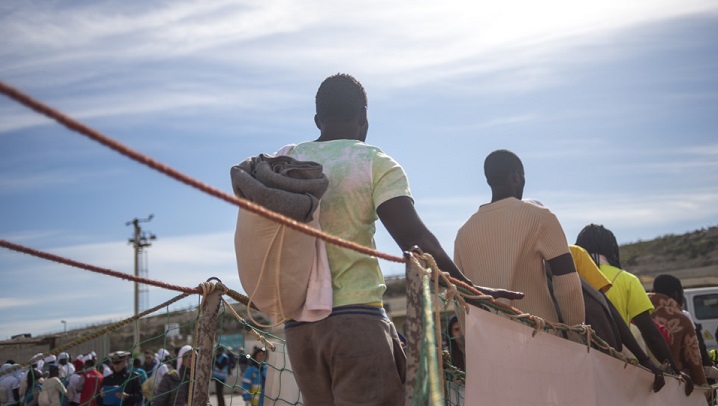 Refugees and migrants arrive on the Italian island of Lampedusa after being rescued at sea. March, 2016. (Photo Credit: Doctors of the World via FLickr Creative Commons)

Italy is proposing another plan to deal with the migrant crisis, this one between the EU and African nations, as hundreds of would-be migrants drown while attempting to cross from Libya last week. FSRN’s Nell Abram has more.

As many as 500 people reportedly drowned in the Mediterranean Sea in a single incident last week. The total number of victims is still unconfirmed, but estimates are based on accounts by a few dozen survivors rescued at sea April 16th. According to the UN’s refugee agency, the survivors include 37 men, three women and a three-year-old child; more than half are Somalis, the others from Ethiopia, Egypt and Sudan.

The mass drowning is the deadliest of its kind documented so far this year. Italian Foreign Minister Paolo Gentiloni spoke to reporters in Luxembourg  earlier this week, ahead of talks about what’s now being referred to as the Italian compact – a plan that goes beyond the EU-Turkey deal to address the crisis at at least some of its origins.

“What is sure is that we are again with a tragedy in the Mediterranean exactly one year after the tragedy we had not in the Egyptian, but in the Libyan waters one year ago,” said Gentiloni, in reference to a mass drowning of as many as 800 migrants in April of 2015. “This is another strong reason for Europe to commit itself not in building walls but to strengthening our common commitment towards migration – especially towards Africa.”

All of the survivors were bound for Italy when they say smugglers tried to load them onto a larger, already overcrowded vessel – which then sank.  The news seeped out slowly after survivors drifted at sea for three days before a Filipino cargo ship took them to Greece,  where they now join thousands of other migrants stranded in camps since the EU-Turkey deal took effect and with the Balkan route sealed shut.

In the weeks since implementation of the EU-Turkey deal that summarily deports migrants arriving in Greece, there’s been a resurgence along the route through the Mediterranean towards Italy. The Italian compact calls for the EU to fund development aid and legal resettlement programs in the African countries from which many migrants are fleeing. Funding would come from  “EU-Africa” bonds. In turn, African nations would more aggressively control their borders and pre-screen potential refugees. European Commission president Jean-Claude Juncker welcomed the plan Friday, but was silent on the funding aspect.