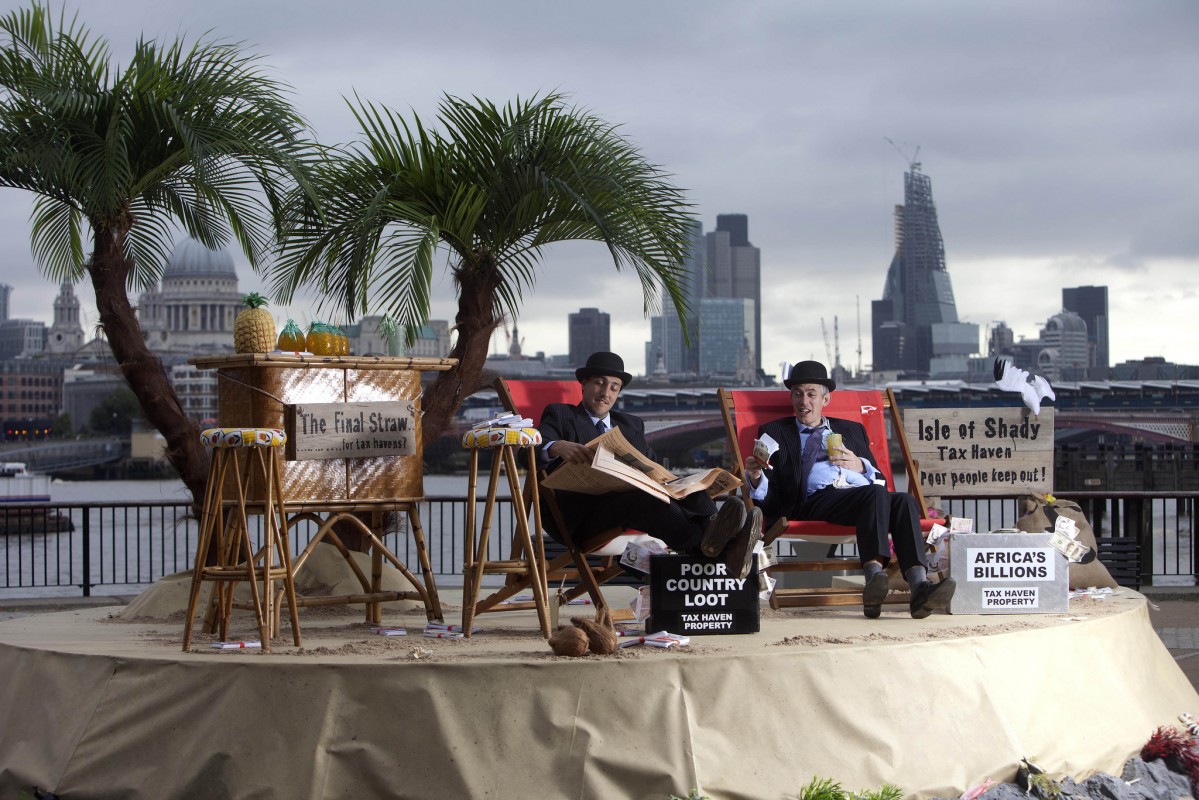 Economic policy protestors use satire and a pop-up tax haven outside of the Tax, Trade & Transparency in London in June 2013. (Photo credit: Photographer: David Parry via Flickr Creative Commons)

This week the world saw the largest document leak in history.  The 11.5 million document dossier known as the Panama Papers gives a disturbing glimpse into the dark side of the global economy. Tanya Snyder has the story.

Here’s what we know so far: a law firm in Panama called Mossack Fonseca apparently helped form more than 200,000 offshore corporations to help wealthy people and businesses shield their money – from taxes, from public scrutiny, from the law. And it’s legal. Sort of.

“You’re taxable on your worldwide income; you can’t dodge taxes just by putting your income offshore,” points out James Henry, a senior fellow at the Columbia University Center for Sustainable International Investment and an adviser with the Tax Justice Network. “It’s like the bar scene in Star Wars. You know, you walk in and there’s the tax dodger, there’s the money launder, there’s the inside trader, there’s the kleptocrat that’s stealing money from the public treasury in South Africa and channeling it offshore so he’s not audited, the arms dealer paying bribes to the president so they buy his weapons.”

The leaks also implicate 140 politicians from more than 50 countries, including 12 current or former world leaders in sketchy financial practices. Russian President Vladimir Putin isn’t named, but so many of his closest cronies are that many speculate Putin must have at least known what was going on. Three of the seven members of China’s all-powerful Politburo Standing Committee are implicated. Just two days after the release of the Panama Papers triggered huge protests in Iceland, the country’s prime minister resigned in disgrace.

Chuck Collins of the Institute for Policy Studies says what the prime minister did may not have actually been illegal, but “it was really impolitic because it was showing that he owned assets in the banks that were getting bailouts from the Icelandic government and he personally had a stake he hadn’t disclosed.”

Relatively few Americans are named in the Panama Papers – an odd assortment of convicted Ponzi schemers, tax evaders, and other financial criminals. But Collins says there’s one-to-two trillion dollars of U.S. money in these tax havens, and that Mossack Fonseca is just one of many law firms specializing in offshoring assets. And the U.S. has other links to tax havens; for one thing, it is one.

“The United States itself is a tax haven for money from around the world because states like Delaware and also Wyoming have very low threshold requirements for incorporation,” Collins explains. “So we could call up a hotline in Delaware and in eight minutes we could create a shell corporation where they’re not going to require a lot of information about who the real interests are in the corporation. People bring their money from all over the world to shelter it in the United States because of our opaque tax rules in a few states.”

The financial services industry may be a boon to Delaware, but it’s not doing a lot to bring the average Panamanian up from poverty. Outside of an elite cadre of bankers and lawyers, these tax havens don’t get much out of the immense wealth housed there because they don’t tax it, which is kind of the point.

The day after the release of the Panama Papers, President Obama announced new Treasury Department rules to try to close the loophole that allows companies to evade taxes by setting up offshore shell corporations.

“They declare that they’re based somewhere else, thereby getting all the rewards of being an American company without fulfilling the responsibilities to pay their taxes the way everybody else is supposed to pay them,” Obama stated in his speech. “When companies exploit loopholes like this, it makes it harder to invest in the things that are going to keep America’s economy going strong for future generations. It sticks the rest of us with the tab.”

But don’t expect to see results from the new rules come tax day. One, it’ll take an act of Congress to really close those loopholes, and Congress hasn’t shown any interest in doing so. And second, these corporate inversions that Obama’s talking about? They’re not what’s going on in the Panama Papers. They’re a problem all right. Congress estimates they’ll cost the U.S. $40 billion dollars over the next 10 years.

But the corporate shell games Mossack Fonseca is playing are different. And cracking down on them will also require action on the part of Congress, and lawmakers the world over. With the disclosures of the Panama Papers currently radiating international shock waves, a window of opportunity for reform is now open…before the world moves on and other law firms in offshore tax havens go back to business as usual.