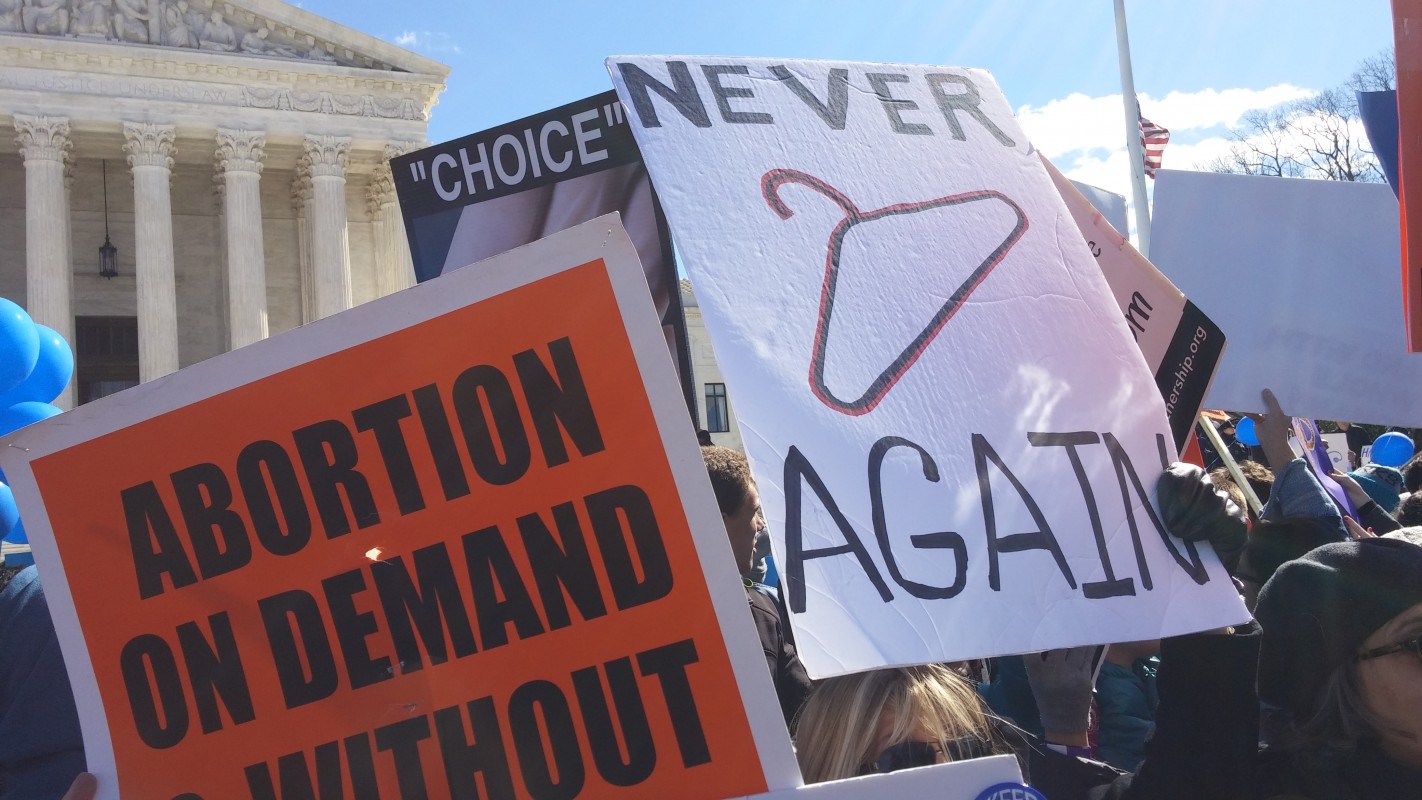 Pro-choice activists held up their signs to block an anti-abortion poster saying "CHOICE" and showing a macabre image of a fetus outside of the Supreme Court during oral arguments in Whole Woman’s Health v. Hellerstedt. (Photo credit: Tanya Snyder)

U.S. state legislatures and lower courts are moving forward on a flurry of abortion related measures, all while a potentially landmark abortion case lingers before a divided  Supreme Court that remains one justice shy of a full bench.

Now, a new report out this week shows that on top of increased regulations and growing funding cuts, abortion providers are also facing a dramatic spike in threats. FSRN’s Hannah Leigh Myers reports from Denver.

Florida’s governor recently signed into law measures nearly identical to the Texas law at the heart of the case currently before the high court. Indiana has passed a law requiring burial or cremation of fetal tissue from abortions. The Missouri Senate is moving to force a regional Planned Parenthood director to turn over the records of patients who have had abortions at the state’s sole remaining abortion clinic. And the Arizona the legislature is advancing HB 2599, which could defund reproductive healthcare non-profits that offer abortions at the same clinics performing Medicaid reimbursable services like STI testing and cancer screenings.

Many of these bills emerged after the anti-abortion group, The Center for Medical Progress, released now widely discredited videos attempting to show Planned Parenthood staffers negotiating pay for fetal tissue.

But a new report released this week by the National Abortion Federation shows the fallout from the videos goes beyond the legislative and financial.

“After the videos were released in July, the volume and vitriol of what we were uncovering was really frightening and staff at NAF could not even keep up with it no matter matter how many extra staff I put on to monitor it,” says NAF President and CEO Vicki Saporta. “So, we retained an outside security firm to monitor these threats 24/7 in mid November and in just six weeks they uncovered more than 25,000 posts.”

Saporta says the sting videos made 2015 a record-setting year for anti-abortion violence and threats: “The number of reported death threats increased dramatically from one in 2014 to 94 threats of direct harm in 2015. We went from zero to nine attempted murders and zero to three murders in 2015.”

The deadliest incident was the armed attack on a Planned Parenthood clinic in Colorado Springs, which had also been a target of the CMP videos. When police apprehended the alleged shooter, Robert Lewis Dear Jr., he reportedly referenced “baby parts” in allusion to the videos.

Dear made similar statements in his first court appearance, like “Kill the babies, that’s what Planned Parenthood does. You’ll never know what I saw in that clinic, the atrocities, that’s what they wanna seal, the babies!”

Multiple investigations into Planned Parenthood launched in the wake of the sting videos have failed to find any evidence of wrongdoing. But state-level defunding of Planned Parenthood services and legal cases brought against the non-profit reproductive health care provider are ongoing.

Meanwhile in California, investigators with the state department of justice raided the home of Center for Medical Progress founder, David Daleiden, this week and seized files related to his sting videos.

Daleiden and another CMP member now face felony and misdemeanor charges in Harris County, Texas for allegedly using fake IDs to access a Planned Parenthood clinic in Houston. In a Facebook post, Daleiden called the raid on his California apartment a move to “harass and intimidate citizen journalists.”

“You know it’s outrageous that David is having to come to present himself to the court when it’s Planned Parenthood that should be on trial today,” said Daleiden’s lawyer, Jared Woodfill, in a press conference outside of the courthouse just after his client posted bail. “The reality is David is a modern-day hero. He has exposed the wrongdoing that’s been occurring in abortion clinics all across this country.”

Whitney Phillips, spokesperson for Planned Parenthood of the Rocky Mountains which was both featured in some of the videos and oversees the Colorado Springs shooting clinic, says harassment stemming from the videos continues nonetheless.

“In and around our health centers we have certainly seen an uptick in violent rhetoric,” she told FSRN by phone.

Planned Parenthood of the Rocky Mountains has pushed to rapidly reopen the Colorado Springs health center, a goal they have mostly achieved.

“The sort of people that do this sort of work aren’t put off by protesters,” remarked Phillips, when asked about the effects of intimidation. “When you drive into the gates at work and you see the people out there with the signs or their bull horns and their ladders screaming at you through the trees it really makes you work that much harder every single day.”

With Planned Parenthood coming up on its 100 year anniversary and Roe v. Wade recently passing its 43rd year, pro-choice advocates across the country are joining forces to find ways to turn the tide on what they call steps backwards in women’s reproductive rights.

The Supreme Court is expected to rule on the Texas law that has served as a blueprint for other targeted restrictions on abortion providers sometime in June.