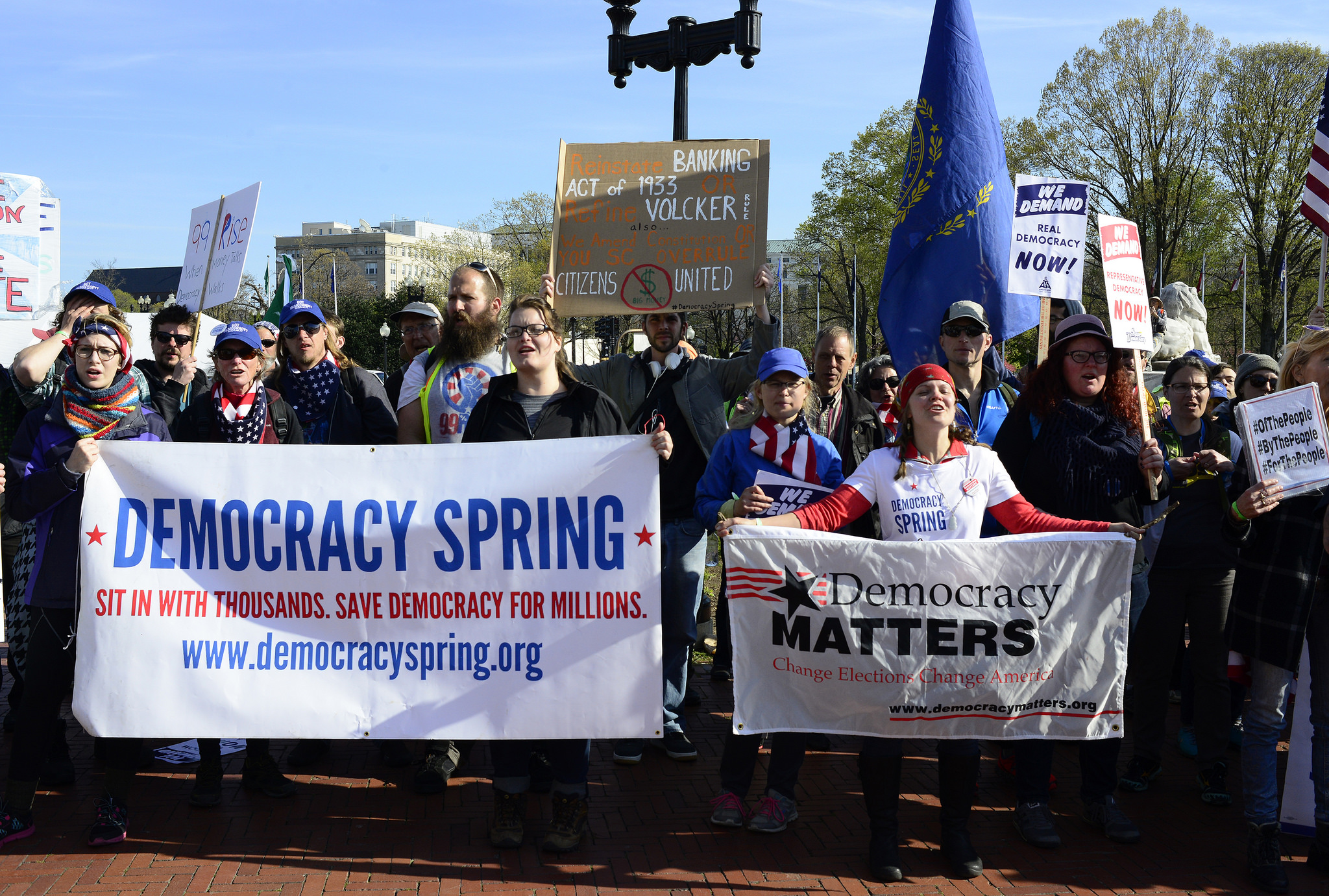 More than 600 activists have been arrested so far this week while protesting the corrupting influence of money in politics. The sit-ins are part of a week-long Democracy Spring unfolding in Washington, D.C. Tanya Snyder reports.

This is the first election year Americans have seen since 1965 without the protection of a robust Voting Rights Act. The Supreme Court invalidated a key part of that landmark law three years ago. This week, thousands of people are in Washington D.C. under the banner of Democracy Spring to protest that, and another Supreme Court ruling that they say has corrupted democracy.

“We think of Citizens United as the first step toward a complete takeover of the wealthy moneyed interests taking over our politics,” explains Peter James Callahan, a spokesperson for Democracy Spring. He says the movement represents a cross-section of the U.S. population.

“We’ve seen everyone, from 13 and 14-year-olds, that begged their parents to let them come and their parents escorted them to D.C. to get arrested, which is pretty epic,” says Callahan. “And then we saw yesterday, with Elders Day, tons of older Americans standing up for the voices of their children and grandchildren and the future of this country.”

Each day’s sit-in has a different theme, from Black Lives Matter to climate justice, and so far organizers say more than 600 people have been arrested for their peaceful protest. David Darby of Oregon was one of around 400 people arrested on the first day. He says, as a person who was raised in poverty, the issue of money in politics feels personal.

“The idea of me owning property or a house or retirement or getting an education or having health care, I saw very early on I didn’t have much of a future,” Darby says.

As he started asking questions, people told him if he wanted to make change he should work within the system.

“I looked at that as a serious option, even though I didn’t have access in the ways other people with privilege have,” explains Darby. “And as I started to look into that I started to realize that those in the positions that even if I got myself into I’d have to be answering to big money because that’s the only way you can hold an office.”

Darby also took part in a 10-day march from Philadelphia to Washington leading up to the Democracy Spring week of action. One-hundred-sixty people participated in that march, with many more joining along the way for a day at a time. Peter James Callahan says they encountered support all along the way.

“We had a farmer give us eight dozen eggs because he really supported what we were doing, really wanted to make some change, but that was all he had to give us,” recalls Callahan. “So he gave us eight dozen fresh eggs and we were very grateful for it.”

The Democracy Spring campaign is pushing Congress to consider two voting rights bills and two bills to get big money out of politics. Hundreds of high-profile individuals and organizations, from actor Mark Ruffalo to the Yes Men, have signed on to the campaign.