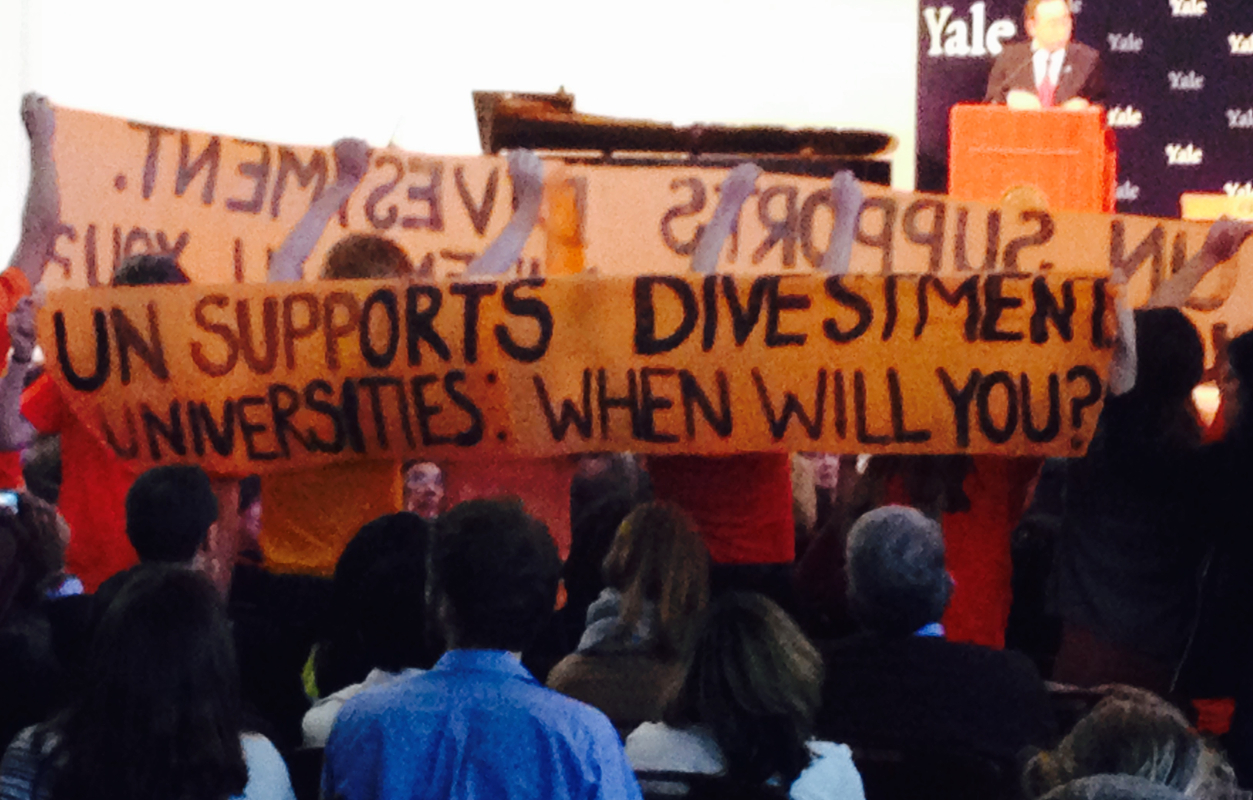 Climate news can often be depressing. One study after the other confirms grim “worse than we thought” predictions while policymakers take little to no action. But occasionally there are small victories to report, and recent days have brought a couple of long-sought-after wins for the little guys. Melinda Tuhus has more from New Haven.

An hour before UN Secretary General Ban ki-Moon delivered a speech at Yale this week, the university announced that it divested $10 million in coal and tar sands investments out of its $25.6 billion endowment. Its rationale is that such investments are unlikely to be profitable if carbon pricing is ever put in place that would reflect the true cost to the climate of burning fossil fuels.

While Ban lavished praise on Yale President Peter Salovey for the move, the students from the group Fossil Free Yale claimed credit for this first step toward divestment, after five years of campaigning.

“This partial victory is an important first step, although it does not reflect an ethics-based university wide commitment to divestment, hopefully it represents a change in the consciousness of these universities and a step toward what we’ve been fighting for all along,” Freshman Arabelle Schoenberg told a crowd at a rally held on campus the day of the divestment announcement.

Also at Yale last week, former NASA climate scientist James Hansen spoke on campus. He was the first to testify before Congress, back in 1988, that global warming from burning fossil fuels was already occurring. He is now a professor at Columbia University and spoke about his controversial new paper, which posits that sea level rise will likely happen much faster and higher than more conservative estimates, like that from the Intergovernmental Panel on Climate Change, have predicted.

Hansen said the planet is absorbing more energy than it’s releasing and to restore the energy balance requires steep reductions in CO2 emissions. He spoke the day before a federal judge in Oregon handed down a favorable ruling in a lawsuit he and Our Children’s Trust had brought against the federal government over what legal rights future generations have to a stable climate.

“We’re asking the government to give a plan for how they’re going to reduce emissions at a rate that would be consistent with restoring the planet’s energy balance in a century,” explained Hansen. “And if we did that I think we could minimize sea level rise.”

The April 8 ruling determined that the federal government must protect public resources like air, water, and land held in common under the public trust doctrine. The judge rejected the Obama administration’s claims that it is addressing the climate crisis through the actions of its Environmental Protection Agency. The fossil fuel industry also weighed in against the lawsuit.

Kelsey Juliana is a 20-year-old college student and a plaintiff in the case, which was filed last summer. She had filed a similar case against the state of Oregon when she was 15, and that case is still winding its way through the courts. She said what’s unique about these cases is that they extend the traditional definition of “public resources.”

“The atmosphere is this all-encompassing resource that all of life depends on to survive. And damage to the atmosphere results in damage to our water, to our climate, to our land,” Juliana points out. “So by staying negligent on protecting this all-encompassing resource, we’re actually falling short on protecting those natural systems already recognized and held under this protection by the public trust.”

Asked about the Our Children’s Trust lawsuit, Fossil Free Yale member Emma Phelps agreed that it’s a very important development: “It’s showing that the people who are causing climate change — the corporations, the fossil fuel industry, and the government — are actually being held to account in a court of law, and especially recognizing the concrete harms that climate change is causing right now and will cause in the future in a way that is basically saying that the government is being negligent for not acting. And I think that’s very relevant as far as our campaign is another way of young people also fighting for the climate.”

While not directly a defendant, the fossil fuel industry petitioned to an intervenor defendant in the case on the side of the Obama administration, claiming that if it moves forward it would be a direct threat to its interests. Juliana explains what a victory might look like.

“That would mean that the fossil fuel industry would get no more rubber stamping from federal agencies to continue to create and expand, export, and mining and extraction and fracking projects, and there would be instead investments in renewable energy,” Juliana explains.

The judge’s decision is pending review by another judge in the same court before the lawsuit can move forward. Leading climate activists Bill McKibben and Naomi Klein have called it the most important case on the planet right now.