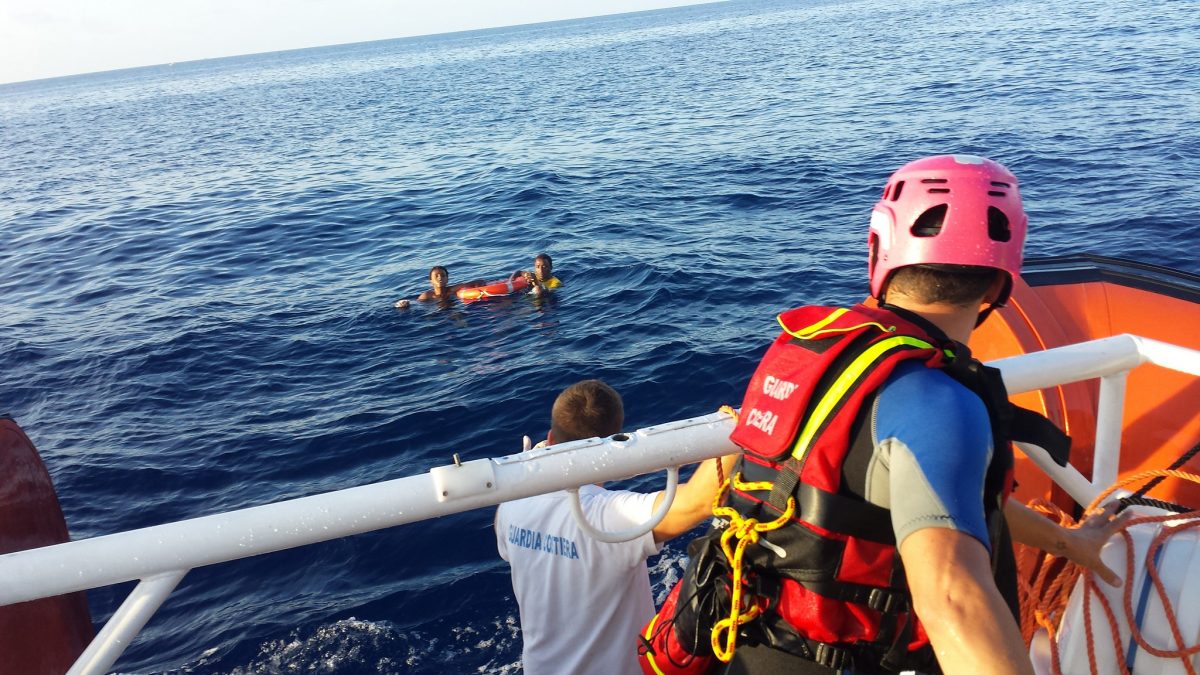 The Italian coastguard rescues two of the 156 survivors of the October 3, 2013 tragedy off Lampedusa Island. (Photo credit: Photo Unit via Flickr / Creative Commons)

Another picture of another dead child, drowned in the Mediterranean, has captured international attention as the number of people dying while trying to cross the sea continues to climb. FSRN’s Nell Abram has more.

The picture of a lifeless baby, cradled in the arms of a volunteer aboard a rescue boat, has not ignited the same worldwide indignation that a similar photo of a three-year-old boy washed ashore in Turkey did last fall. The baby’s death comes as the United Nations’ refugee agency says the number of people dead in the Mediterranean Sea jumped dramatically last week.

“A series of shipwrecks and capsizings last week on the Mediterranean now appears to have claimed at least 880 lives, according to new information we have received through interviews of survivors in Italy. I emphasize that figure is a conservative estimate,” said UNHCR spokesperson William Spindler, speaking at a press conference in Geneva Tuesday.

Since January 1, more than 2,500 people have died – the lion’s share while trying to cross from Libya to Italy. That’s an exponential increase in drownings from those registered just two years ago.

According to Spindler, the journey from Libya to Italy is most often travelled by Nigerians and Gambians, and is significantly more dangerous than the much shorter Turkey-Greece crossing that Syrians, Iraqis and Afghans tend to use. Far fewer people attempt the longer and rougher journey, yet many more die trying.

“The reason people are taking to the sea is that they have no choice. Whether they want to come for economic reasons to Europe or whether they are fleeing war and persecution, there is no other legal alternative open to them,” Spindler explains. “So that’s why we have been advocating for a long time for legal ways for the most vulnerable refugees to travel to safety in Europe and elsewhere through resettlement, through family reunification schemes, through work and study visas for refugees and so on.”

So far this year, 204,000 migrants have crossed the Mediterranean, only about one-quarter of them from Libya to Italy, along the maritime route where 85 percent of the dead have lost their lives.